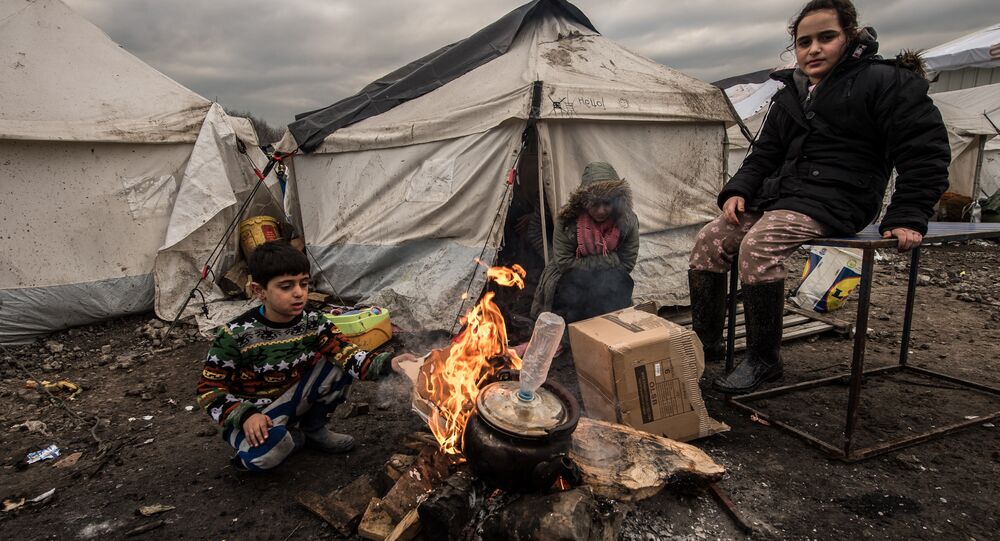 Daily Life on Alien Soil: A Look at Refugee Camps on Syria's Perimeter

Since the outbreak of the Syrian civil war nearly five years ago, 4.8 million people have fled the country's violence and collapsed infrastructure and become refugees abroad; most displaced Syrians have sought refuge in safer parts of Syria, as well as in nearby Turkey, Lebanon, Jordan, Iraq, and Egypt. Here are pictures of their everyday lives.

According to the estimates of the Office of the United Nations High Commissioner for Refugees (UNHCR), up to 7 million Syrians are displaced within Syria; half are children.

© AFP 2021 / MUJAHED ABUL JOUD
Displaced Syrians fleeing areas in the northern embattled province of Aleppo, walk past tents at the Bab al-Salama camp, set up outside the Syrian city of Azaz on Syria's northern border with Turkey on February 12, 2016

Many of them have fled to the city of Azaz in the northwestern Syria, roughly 32 kilometers (20 miles) north-northwest of Aleppo.

a #refugee camp at the #Bab al-Salameh border crossing on #Turkey — #Syria border near Azaz town of #Aleppo! pic.twitter.com/SVEzVXtfMR

​Daesh (Islamic State/ISIL/ISIS) made Azaz one of its main hubs from mid-2013. According to representatives of the Syrian Kurds, Islamist fighters used to cross into Syria from Turkey through Azaz. Rebel fighters used it to receive supplies from Turkey and their casualties were sent the other way to hospitals inside Turkey.

Three little angels smile towards the camera at the Babunnur refugee camp in Azaz, Syria. pic.twitter.com/PMWXjP4J82

​The gateway remained just that until recently, when the Kurds of northern Syria moved in.

His name is Salam. Like thousands of Syrian children, he was born in a refugee camp.

​​The area is home to the Bab Al-Salam refugee camp in Azaz, near the Syrian-Turkish border.

© AFP 2021 / KHALIL MAZRAAWI
A picture taken on March 15, 2014 shows men having tea the sprawling desert Zaatari refugee camp in northern Jordan near the border with Syria which provides shelter to around 100,000 Syrian refugees

The camp was constructed in 2012 by the Government of Jordan and international agencies as part of a massive emergency response after the civil war started in 2011.

No, this isn't a city. It's Zaatari refugee camp in #Jordan housing over 80,000 Syrians. More than half are children pic.twitter.com/D2zBthqdtq

Daily life in Zaatari: I was there today to attend #UNFPA event celebrating 5000th birth in refugee camp. Bravo! pic.twitter.com/XmvhLVdN3o

​Zaatari’s basic structure was constructed in just nine days and was initially home to just 100 families, but after exponential growth it is now home to 81,000 inhabitants, all living within its five-mile (8 kilometers) circumference.

Minister #Ploumen to visit Zaatari #refugee camp and the town of Mafraq in Jordan.https://t.co/LMdTJIAKgi pic.twitter.com/Wqz6jPdqBv

"The world can do better by these children," @WFPUSA 's @HunterBiden says after visiting #Zaatari refugee camp: https://t.co/tRVOIZ4g60

​Due to the unplanned nature of the camp’s growth, services are unevenly distributed across its vast expanse. For many residents, accessing basic amenities is a daily challenge as health and education services can be far away from where they live.

Many Syrian refugees have also crossed into Lebanon, making it home to the highest number of refugees per capita in the world.

A sweet kid I met when visiting a #syrian refugee camp in #lebanon, See the video: https://t.co/zgdSbo1kCY pic.twitter.com/X6vcedY74i

Even a little marble becomes a treasure in a #Syrian #refugee camp in #Lebanon. By @Chinchere_JC for @FondazioneAVSI pic.twitter.com/gyg1qdsWjm

Merry Christmas, from a #Syrian refugee camp in #Lebanon. Thoughts from my week back home on https://t.co/c0eJ4oF3gB pic.twitter.com/QtfG5Wh2cr

​​Some 70 per cent of the over 1 million Syrian refugees in Lebanon now reportedly live in extreme poverty, according to the country's standards.

© AFP 2021 / ARIS MESSINIS
Refugees and migrants live at a field outside the Moria Hot Spot on the Greek Lesbos island on November 12, 2015

About 10 percent of the Syrian refugees have fled to Europe. Many of them have landed on the island of Lesbos, Greece.

​The island has received the highest number of refugee arrivals in Greece: in 2015, more than 100,000 have arrived on this island.

© AFP 2021 / LOUISA GOULIAMAKI
Sisters walk on railway tracks where refugees installed their tents at the makeshift camp of the Greek-Macedonian border near the Greek village of Idomeni, on March 5, 2016, where thousands of refugees and migrants wait to cross the border into Macedonia

The majority of refugees use Lesbos as a transit point on their way to northern Europe.

Another refugee location is the Idomeni camp on Greece’s border with Macedonia. More than 5,000 people have been left stranded there since the end of February, after four Balkan countries announced a cap on refugee arrivals.

​The situation is set to worsen after Serbia, Macedonia, and EU members Slovenia and Croatia said that they would restrict the number of daily arrivals to 580.

At a #refugee camp in #Athens yesterday where all but Syrian, Afghani, Iraqi refugees where bussed to from #Idomeni pic.twitter.com/ED6Zzw7Q4Y

​Austria also said that it would only allow 80 people a day to claim asylum, and would limit the daily number of people crossing the country to 3,200.

The move has sparked a bitter spat between Athens and Vienna, with Greece fearful it will trigger a domino effect, leaving thousands more people stranded on its territory.