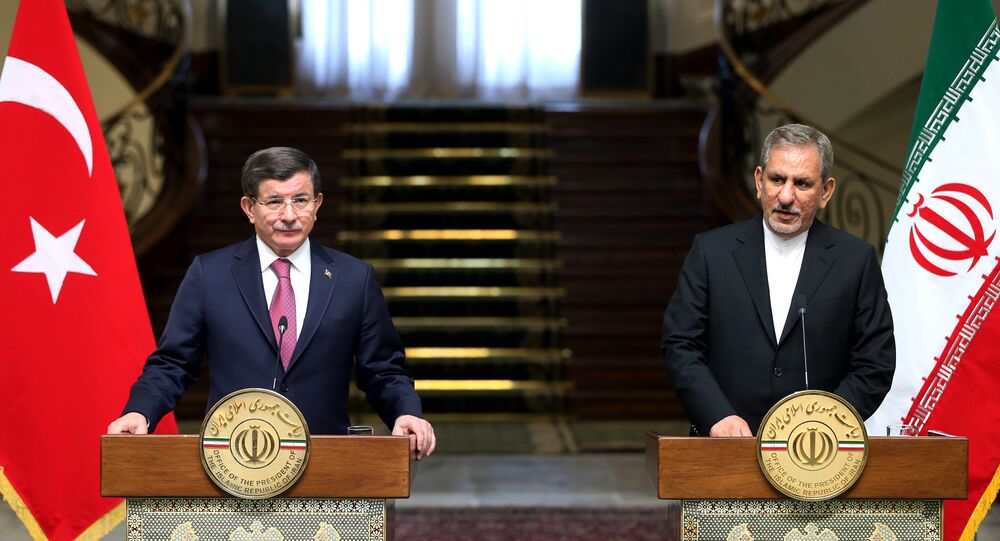 Turkish Prime Minister Ahmet Davutoglu said that relations between Turkey and Iran are extremely important for peace and stability.

"With all our contradictions, Turkey and Iran share a common goal – to extinguish the ethnic conflicts in the region. Our relations are extremely important for peace and stability," Davutoglu said as quoted by Turkey’s NTV broadcaster.

Davutoglu arrived in Tehran for a two-day official visit on Friday, leading a delegation of economy, customs, trade, energy and other ministers. He is due to meet Iranian President Hassan Rouhani and Foreign Minister Mohammad Javad Zarif.

© AFP 2020 / OZAN KOSE
Turkey Summons Iran Envoy Over Controversial Reports on Erdogan
The Turkish prime minister noted Ankara’s role in reaching the international nuclear deal with Iran last summer, which led to the termination of most anti-Iran sanctions in January 2016.

"Even before the lifting of the sanctions, we planned to achieve turnover of $30 billion a year, but now we can go even further," Davutoglu stressed, noting plans to expand energy, transport and tourism cooperation.

Iran has exported 10 billion cubic meters of natural gas per year since 2001 to Turkey, second in volume to Russia.

Despite economic ties, Turkey and Iran remain at odds over the Syrian conflict and support for its government.