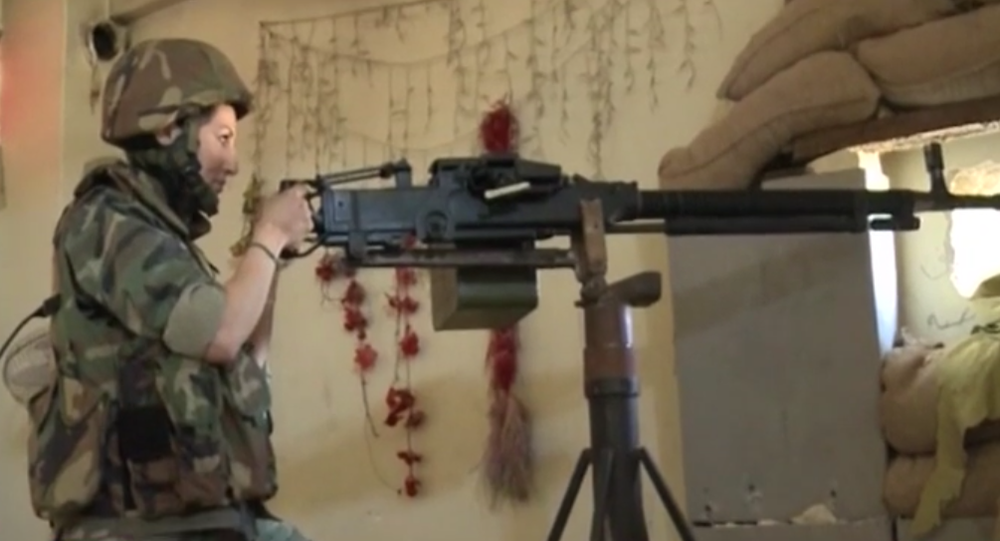 The only female soldier fighting Daesh militants in the old city of Aleppo is seen as one of the best fighters by her brothers in arms. Rose was a former lion tamer and now she is fighting the armed groups.

© AFP 2021 / GEORGES OURFALIAN
Daesh on the Run: Syrian Army Wins Back Hama-Aleppo Supply Line Amid Nationwide Offensive
RT’s journalist Lizzie Phelan went to the frontline to meet the brave woman who despite all the dangers continues to fight bravely against the terrorists.

“When Rose first came here all of the soldiers in her sector were astonished to have a girl among them, but only a few days later, she proved to be like them or even better than them in dealing with the armed groups,” Syrian army Colonel Iyad said.

Talking about her life before the war broke out Rose told the journalist, “When this crisis began and I left the zoo, I decided to work and serve my country here so that I can get my zoo and old job back. I expected it would be a matter of one or two years, but we are still here now in our positions,” she said.

“I was very attached to the animals I raised, I loved them. Now they’re in an area controlled by the opposition, it is a very big sacrifice for me to be away from them,” Rose added.

Her enemies call her Abu Jaffer after one of the lions she raised before the war broke out.

Speaking about the war and the fight against the terrorists, Rose said that she uses different weapons to cover troops when they are advancing.

“Depending on the battle I decide which weapon I use – a machine gun, BKC, Dhushka – any weapon, which is in my hands, I use it to cover the troops while they’re advancing.”

“The first day when she joined our armed forces her main goal was to fight to the last drop of her blood. She was determined to never be captured or be a weakness among us. She decided to be a martyr before she was captured,” Colonel Iyad stressed.

Rose told the journalist about one time when the enemies were shouting at her “Abu Jaffer we are coming for you, we won’t slaughter you, we have other plans for you.”

Rose replied, “Do your best. I am not scared; mountains aren’t scared of the wind.”

The battle in the Old City of Aleppo is critical as the government troops fear that if anti-government militants manage to take full control of the area they would destroy what remains of the ancient landmark.