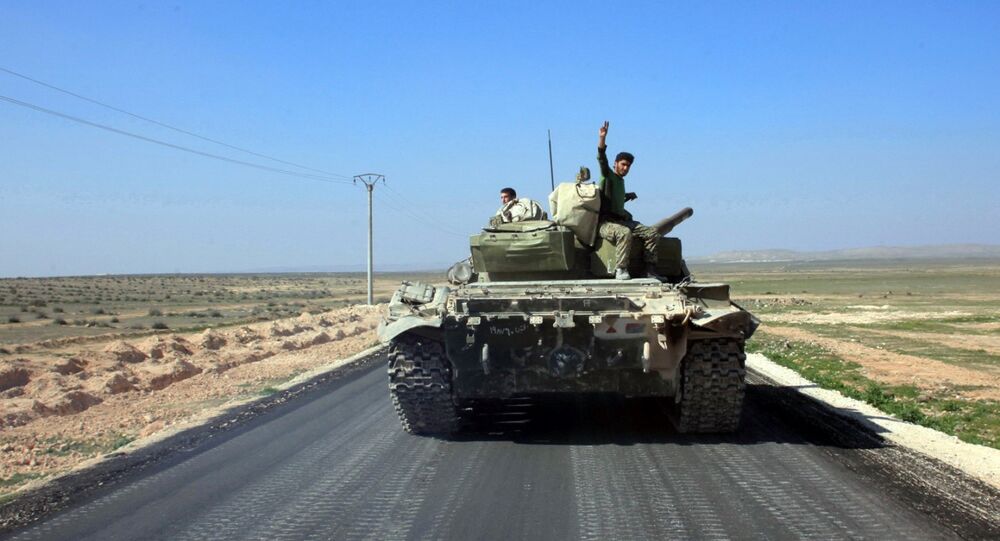 The Syrian Army and its popular allies have recaptured the government forces’ main supply line from Hama to Aleppo after a series of fierce firefights with Daesh terrorists, Iran’s Fars news agency reported.

"The Syrian government forces pushed Daesh militants back from their last positions along the strategic road connecting Ithriya in Hama province to Khanaser in Aleppo province," the army said.

“The engineering units of the army are working to defuse roadside bombs planted by the terrorists to reopen the road as soon as possible," the army went on to say.

© Sputnik / Iliya Pitalev
Syrian Army Regains All Settlements Along Key Aleppo Vital Supply Route
Earlier reports said that the strategic village of Abu al-Karouz had been retaken from the terrorists and at least 14 militants had been killed in the government forces’ ongoing offensive against Daesh terrorists in the southeastern parts of Aleppo province, Fars News wrote.

Meanwhile, government troops, backed by the Republican Guard and the National Defense Forces, scored more military gains in other key provinces across the country, killing a number of militants and inflicting major damage to their military hardware.

Russian fighter jets, in a fresh round of combat missions on Sunday, bombed several concentration centers of the al-Qaeda-affiliated al-Nusra Front in the eastern part of Aleppo province, inflicting major losses on the terrorists.

In the coastal province of Latakia, Syrian Army commandos pushed the militant groups back from their positions and won back a strategic height overlooking Turkey.

The terrorists left behind scores of dead and wounded members and fled their strongholds in the northern part of the province after coming under heavy attacks by the Syrian Army and National Defense Forces.

The Syrian Army's anti-terrorism operation in the eastern province of Deir ez-Zor near the border with Iraq left at least 20 Daesh fighters dead and their military grid severely damaged.

On Sunday Daesh pulled its fighters back from a key town in the north of Raqqa province on the border with Turkey under heavy attacks by the Kurdish People’s Protection Units (YPG) and the Syrian Democratic Forces (SDF).