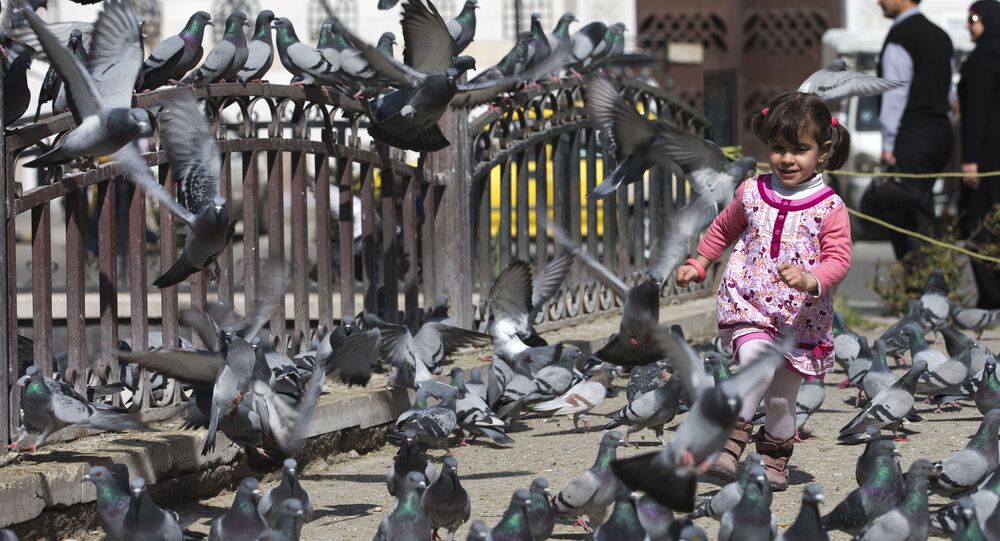 The Sound of Silence: Life Returns to Normal in Syria as Ceasefire Holds

Correspondents representing news agencies from around the globe have reported a lively atmosphere on the streets of the capital Damascus and other major Syrian cities just days after a ceasefire took effect in the country, according to the German magazine Der Spiegel.

© Sputnik / Iliya Pitalev
Syria Ceasefire Largely Holding - US Strategic Command
It seems that life has started to return to normal in the Syrian capital Damascus and other major cities across Syria, where the ceasefire entered force a couple of days ago, the German magazine Der Spiegel reported, referring to correspondents from a wide array of international news agencies.

According to Der Spiegel, after the beginning of the ceasefire most Syrian citizens were able to walk outside without fearing for their lives.

"In many parts of Syria people once again conquer the streets. The agreed truce for them is a way to return to normal life," Der Spiegel pointed out.

The magazine quoted correspondents from news agencies including AFP as saying that there are plenty of people on the streets of Damascus and Aleppo and that an unusually lively atmosphere currently resonates in the Syrian capital's streets.

© AP Photo / Hassan Ammar
In this picture taken Friday, Feb. 26, 2016, a car drives through a devastated part of the old city of Homs, Syria

"There is something strange in this truce, given that we used to sleep and awake to the sound of the air strikes and artillery," 45-year-old Backer Abu Omar was quoted as saying.

At the same time, hostilities are under way in some northern and central areas of Syria, Der Spiegel said, adding that Daesh terrorists have attacked Syrian Kurds near the border town of Tel Abyad; at least 70 jihadists were reportedly killed in the fighting.

The UN Security Council unanimously adopted Resolution 2268 endorsing the Russia-US agreement on the cessation of hostilities in Syria on Friday, shortly before the ceasefire came into force.

Russian party fully controls situation in #SYRIA.Every day not less than 70 UAVs, as well as space and other reconnaissance means are used

The cessation of hostilities does not apply to designated terrorist organizations operating in Syria, including Daesh (ISIL/ISIS) and the Al-Nusra Front, a group affiliated with al-Qaeda.

© Sputnik / Eduard Pesov
Lavrov, Kerry Exchange Views on Syrian Ceasefire Implementation
The Russian Defense Ministry said, in turn, that "Russian aircraft aren't performing strikes in those regions where a willingness to cease fire and to start negotiations were expressed."

Russia's ongoing air campaign in Syria was launched on September 30, when more than fifty Russian warplanes, including Su-24M, Su-25 and Su-34 jets, commenced precision airstrikes on Daesh and Al-Nusra Front targets at the behest of Syrian President Bashar Assad. In addition, the Russian Defense Ministry confirmed earlier this month that advanced, super-maneuverable Su-35S multi-role fighters had begun their combat mission in Syria.