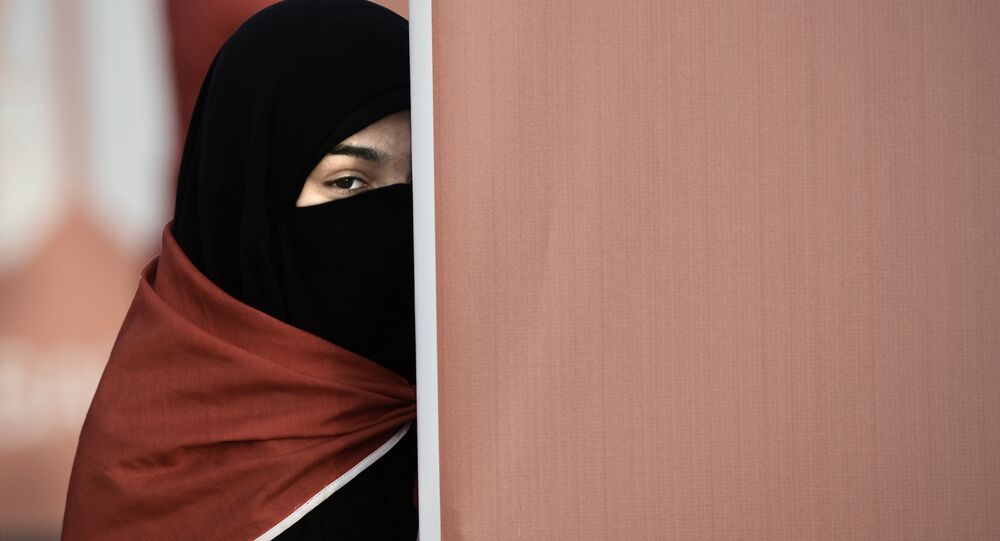 A Yazidi girl made a Daesh sex slave revealed cruel suffering from months in captivity in a book written by German journalist Alexandra Cavelius.

© AP Photo / Seivan M.Salim
No Room for Mercy: Yazidi Girls Subjected to ‘Virginity Tests’ After Escaping Daesh
Shirin was 17 years old when Daesh (IS, ISIS, ISIL) seized the village in Northern Iraq where she and her family enjoyed living until August 2014, the German international broadcaster Deutsche Welle (DW) reported.

After the seizure, the terrorist group required "all daughters" to be brought to fighters immediately for abduction, according to the Daily Mail.

"We were so blind. We didn't recognize the danger. Then at around 4 p.m. ISIS fighters told our village head,'We will not do anything to you as long as all of your daughters are brought to us by 6 p.m.,'" the teenager said.

Her family failed to run away and the teenager was abused as a sex slave for several months. Shirin was first surprised to recognize some of her "husbands" as her former neighbors who were living in peace as "a big family" before Daesh came.

Testimonial by a brave young yezidi woman who was held captive by Daesh. #crimesagainsthumanity pic.twitter.com/nICfWVEI0a

After Daesh took control over the village, Shirin was taken to a hideout with other women where they were "hit, attacked, raped by men high on drugs," and "left to starve and not given anything to drink," the teenager wrote.

"Muslim Kurds, Arabs and Yezidis were like a big family for me before all of this," she wrote, according to Deutsche Welle. "It was only after the terrorists seized power that our neighbors suddenly no longer wanted to even eat with us…. Workers, teachers and doctors — all of our Arab neighbors seemed to have joined the [Islamic State]."

© REUTERS / Stringer
Jihad or Death: Daesh Beheads Dozens of Own Militants for Desertion
The terrorists captured thousands of people from the Yazidi minority group that are believed to be infidels according to their religion. Yazidi females were taken as "wives" and sex slaves forcibly by Daesh fighters.

A 60-year-old militant and nine others impregnated Shirin and her last "husband" helped her to flee to Germany.

Some abusers didn't bother to cover their faces during the assault so Shirin easily recognized them.

"When I saw their faces for the first time it was only then that I realized I was looking at the faces of my former neighbors," the teenager said.

The abuses were "such pain, such humiliation," she stressed.

Shirin is safe in Germany now, but she wrote that her whole life will never be the same.

"I never thought something so bad could happen," Shirin wrote. "I was split from my mother, and then I was beaten. I tried to kill myself. I always thought it could not get any worse and then it did."

Every time she sees any long bearded man approaching her in Germany, she gets "panicked and scared," according to DW.

German Court 'Too Busy' to Hear Case Against Daesh Sympathizer