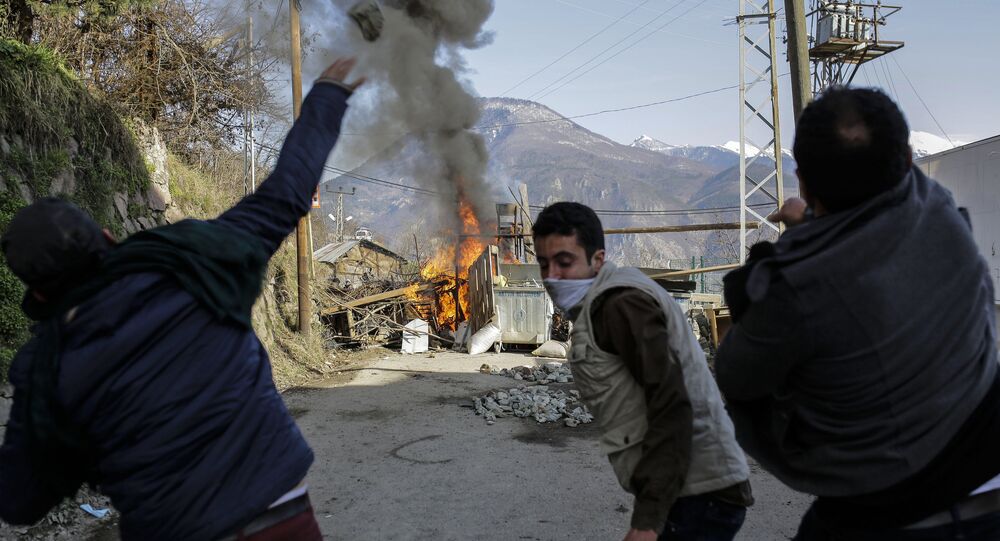 What is going on in Turkey could be compared to the effect of a tornado raging through the country, and the eye of this cyclone is very close, according to former top Turkish diplomat Faruk Logoglu, who described these developments to Sputnik, adding that those are the forces within the country that are dragging it into a war.

“I think that Turkey is being dragged into a war by some forces within the country, and not by anyone from aside, and one should understand it very clearly,” Faruk Logoglu, former undersecretary of the Turkish ministry of foreign affairs and the country’s ambassador to a number of countries, including the US, told Sputnik Turkey.

© AP Photo / Presidential Press Service/Kayhan Ozer
Against the Whole World? Erdogan at High Risk of Being Completely Isolated
The former top diplomat added that Turkey does not have any legal grounds to enter into a war on the territory of Syria as there is no direct Syrian threat to the Turkish territories. And no Arab country will ever support Turkey in case of its invasion into Syria.

Speaking further on the issue, Faruk Logoglu commented on the recent remarks of the country’s Prime Minister Ahmet Davutoglu on the lack of support from the 22-nation Arab League of the Turkey’s actions in the Middle East, calling it a “disturbing signal”.

“The suggestion of the prime minister, who has been closely connected with the Arab world and who has been studying the Arab countries throughout his entire academic career, of an ambivalent tension in the Turkish-Arab relationship, is an important and disturbing signal,” he said.

Earlier on Tuesday the Turkish prime minister in his interview with Qatar’s state broadcaster Al Jazeera criticized the countries of the Arab League for their condemnation of Turkish intervention into the Iraqi city of Mosul last December.

“I am not criticising our Arab friends, but which Arab country did more than Turkey?”  Ahmet Davutoglu  questioned in his interview. “And why, when Turkey went to Mosul to liberate Mosul, to help Mosul, Arab league had condemned Turkey and asked to withdraw?”

“Who will guarantee us if we militarily intervene that Arab countries will be defending and supporting this?” he furthermore questioned.

Faruk Logoglu explained that such criticism of the Arab countries has been caused by several reasons. First, it is a historical issue, he said. Ever since the times of the Ottoman Empire there has been, so to say, a historic rivalry between Turkey and the Arab world for a leadership.

© AP Photo / Kostas Tsironis
Enemy Within: Only Threat Turkey is Facing ‘Comes From Ruling Party’
On the other hand, before the Justice and Development Party came to power in Turkey, the Arab countries had perceived Turkey as a model country to pattern themselves on. It is a NATO member state, democratic and secular country, close to joining the EU, in close relationship with the West.

At that time many of the Arab states wanted to be like Turkey. And now everything has changed, the former diplomat explains, now Turkey is a lot more like an Arab country.

Unfortunately, Turkey has ceased to exist as a model country, which the states of the region would like to pattern on.

“What is going on in Turkey could be compared to the effect of a tornado raging through the country, and the eye of this cyclone is very close,” Faruk Logoglu concluded.