Citing allegations of "spreading terrorist propaganda," the Turkish government has pulled a television station from the airwaves, continuing its crackdown on independent media.

Shocking figures about the Erdogan administration suppression of press freedoms emerged last month. According to Sezgin Tanrikulu, deputy leader of Turkey’s Republican People’s Party, at least 774 journalists were fired during the course of 2015, with another 156 detained by the government. 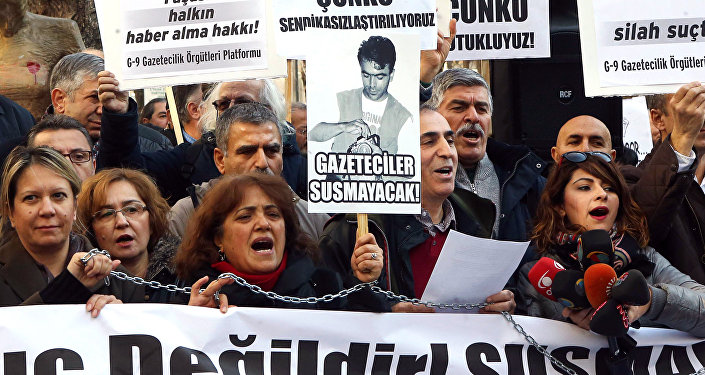 Continuing that pattern into the New Year, Ankara has forced Turkish satellite provider Turksat to stop all broadcasts of IMC TV, claiming the channel supported a "terrorist" group.

"In Turkey, everything contrary to the official view is tossed in to the terrorism bag," said Eyup Burc, general coordinator for the station.

"This was clearly a political decision. The prosecutor has no legal right to seek our closure based on an allegation."

The channel was shuttered abruptly, losing power mid-broadcast during an interview with Can Dundar and Erdem Gul, two journalists who were themselves recently freed from prison.

"This was done deliberately, to send a message to the media: that Can Dundar and Erdem Gul may have been released due to the public outcry, but that doesn’t mean the government is retreating from its course," Burc said.

IMC has been an active voice in highlighting the Erdogan administrations violence against Kurdish communities in eastern Turkey and often hosts opposition politicians.

The station plans to continue airing broadcasts through its website while it appeals the government’s decision.

Ankara’s actions have caused concern among many within Turkey.

"The situation is definitely extremely concerning and dangerous and it has repercussions all over the world, because Turkey is at the center of so many crisis right now," Reporters Without Borders US Director Delphine Halgand told Sputnik.

"I hope we will not have to go until the European Human Rights Court for each case of those who are in jail. It can have a power to release people, but it cannot change everything."

Last month, the Erdogan administration detained 18 academics opposed to the government’s treatment of the Kurdish minority. These professors were also accused of spreading “terrorist propaganda.” In response, academics from across the globe signed a petition demanding their release.