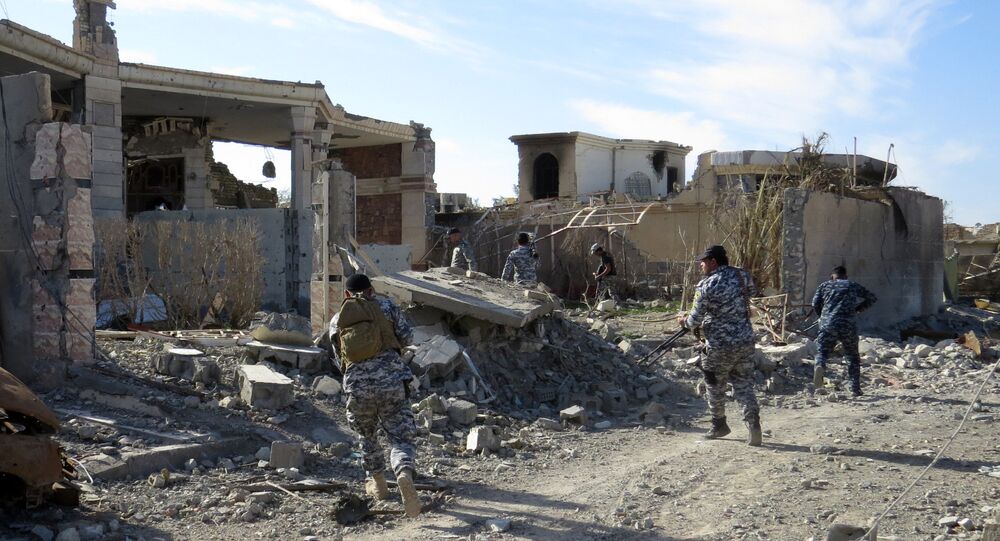 The Iraqi Army continues to restore the infrastructure of the strategically important city of Ramadi, which was liberated from Daesh terrorists early this year, according to Iraqi Lieutenant General Othman al-Ghanemi.

© AP Photo
Victory Over Daesh in Ramadi Provides Strategy for Bigger Battle in Mosul
In an interview with RT, Lieutenant General Othman al-Ghanemi touted the Iraqi Army's efforts to restore the infrastructure of Ramadi, the capital of Iraq's Anbar province, which was liberated from Daesh (ISIL/ISIS) terrorists in early 2016.

"The army managed to regain control of the city. We began work on the reconstruction of Ramadi's infrastructure, including roads and bridges," al-Ghanemi said.

In addition, efforts are being made to clear the city of mines and bombs, according to him.

© AFP 2021
Iraqi forces secure an area in Ramadi, the capital of Iraq's Anbar province, on January 10, 2016, after retaking the city from Islamic State (IS) group jihadists

At the time of the interview, the Iraqi Army was conducting an active offensive against Daesh in Anbar province. The troops had earlier launched a major advance on the terrorists to win back the city of Fallujah, located 42 miles west of the Iraqi capital Baghdad. It is known to be one of the largest cities in Anbar province.

Another victory for #Iraq:

As for Ramadi, the Iraqi military said on December 28, 2015 that they were in full control of the city, but the governor of Anbar province, Suhaib Rawwi, and US Secretary of State John Kerry later said that Ramadi had not yet been fully recaptured.

#Iraq | Preparations continue to clear the city of #Ramadi pic.twitter.com/E0K5WoRGSt

© AP Photo / Hadi Mizban
'Not a Secret, Everyone Knows That': Iraq Warns Turkey Against 'Playing' With Daesh
In early January, Lieutenant General Abdul-Ghani Asadi, commander of Iraq's anti-terrorism contingent, told Sputnik that parts of Ramadi which remained under the control of Daesh should be fully liberated in four to five days.

Since 2014, vast territories in Iraq and neighboring Syria have been occupied by the group, which proclaimed a caliphate on the land under its control.

Daesh, which has been condemned as a terrorist organization by many countries, including Russia, has carried out numerous terror attacks and committed many human rights atrocities in Iraq and Syria.