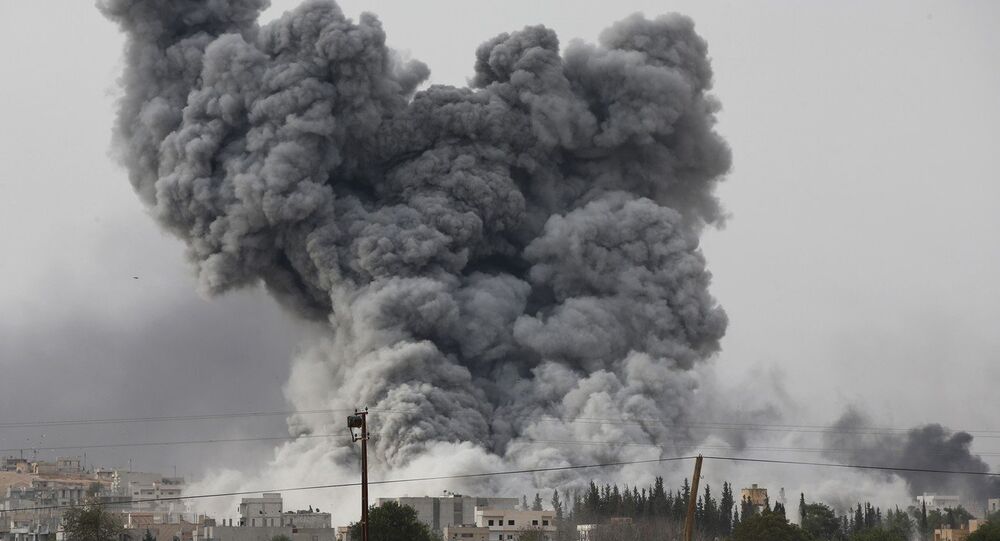 Turkey has the right to conduct military operations in Syria and elsewhere to protect itself from the threat of terrorism. That’s what Turkish President Recep Tayyip Erdogan told a conference on Saturday at an event celebrating the inclusion of Turkey’s southeastern province of Gaziantep on the list of UNESCO’s Creative Cities Network.

© AP Photo / Lefteris Pitarakis
'Too Many Enemies': Erdogan Believes Turkey 'Has the Right' to Invade Syria
Speaking at the event, Erdogan also stressed that Ankara’s position had “absolutely nothing to do with the sovereignty rights of the states that can’t control their territorial integrity.” He argued that it, on the contrary, showed Turkey’s will to protect its sovereignty rights.

Erdogan’s latest comments come after the international community slammed Ankara over its shelling of YPG forces in northern Syria.

Catherine Shakdam, Director of Programs for the Shafaqna Institute for Middle Eastern Studies spoke to Sputnik in an exclusive interview saying that Turkey’s policy in Syria is aimed only at protecting Erdogan’s personal interests.

“By interest I mean Daesh radicals and other groups which are creating chaos in Syria. He is not trying to defeat or combat terrorism but actually he is trying to weild terror as a weapon of mass destabilization in Syria because he is trying to recreate the Ottoman Empire, maybe not in the way it used to be but to create colonies of countries that would heed to the will of Ankara and that is the new reality that we are living in today.”

She further spoke about how Turkey is willing to conduct military strikes outside its border in the name of national security and that is completely absurd.

“It goes back to this idea of American exceptionalism and now you have the likes of Turkey and Saudi Arabia trying to justify their own imperialism, their own violation of international law. You cannot argue that it is okay to attack the sovereign nation of Syria, just because you are allegedly threatened by terrorism. You would need to work with this country; you would need to create alliances with this country. You cannot step outside the law to fight terror groups, which themselves are sitting outside the law, because then you become a terror state,” Shakdam told Sputnik.

The analyst talked about how realities have been so twisted and distorted. She said that the only reason why there is war in Syria in the first place is because there is a war against terror, and this terror has been helped and funded by foreign powers.

© Photo : Russian Defence Ministry
Western Lies on Russia's Syria Campaign Exposed on Air
“If you look at Iran in Syria that is what they did, as they acted upon the invitation of President Bashar-al-Assad, because they understand that regardless of his political standing and regardless of some things that they may disagree with, Bashar still represents an office and an institution that we need to respect. Otherwise everything is chaotic.”

Shakdam stressed that the nations must rise above their personal sentiments in order to carry out the right foreign policy.

The analyst said that President Erdogan is not even helping his country. “Erdogan will not be alone because Saudi Arabia is going to help him. The two countries are trying to force Western powers to engage and Saudi Arabia has a very strong lobby in the United States and they control a lot of financial interest of the States. So this is the reality that politicians are now picking up the point because they still think that it is the US and NATO playing Ankara and Riyadh but I would actually argue that this balance of power has actually flipped.”

She further added that she thinks that the Western powers understand the danger and it is a recipe for disaster, if this balance of power is flipped.

What Could Italy's Investigation Against Erdogan Find?