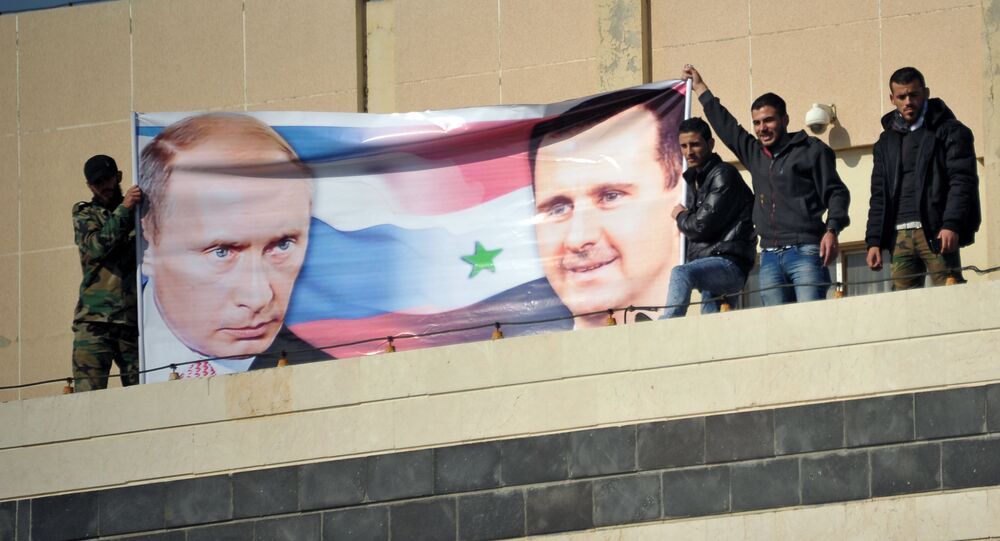 Russian President Vladimir Putin is extremely popular in the Syrian capital. The president’s rating has even exceeded the popularity of the long-standing ally of Damascus - the leader of Hezbollah, Hassan Nasrallah, Spanish newspaper El Pais wrote.

© Sputnik / Alexei Druzhinin
Why Putin’s Strategy in Syria Wins Over and Over Again
In the city streets of Damascus there are portraits and souvenirs of Vladimir Putin everywhere. The president can be seen on billboards, his portraits are hanging along the streets on office buildings and kiosks, the newspaper wrote.

“Since September last year, when, with the support of the Russian air force the Syrian Army won several major victories against the terrorists of Daesh, the ranking of the Russian leader went up and even eclipsed the glory of the leader of Hezbollah.”

​Currently, Putin’s admiration can be seen in the whole of the capital especially near the central Umayyad mosque bazaars where shop vendors are selling enormous collection of badges, key chains, mugs and t-shirts with the image of the president.

According to the Spanish publication in some schools in Damascus, Russian is being offered as the first foreign language and Russian military officers who in their spare time walk around the city are met with cries of ‘Welcome Russia!’

Syrian woman kisses poster of #Putin for helping #Syria to stay secular and free of ISIS and foreign occupation. pic.twitter.com/tJ2wfF5jMb

​Against the background of such a powerful support for Moscow's actions the population loyal to Syrian President Bashar Assad has turned a deaf ear to the international press reports about how Russian airstrikes are allegedly killing civilians.

Similarly, the Russian language can be heard in Syrian military establishments and it should not come as a surprise because the army is currently headed by people who were educated in Russia.

Picture of the day: Putin — Assad poster and special forces at the front #Syria pic.twitter.com/lfDKBW3Dip

​The ‘Putin effect’ has affected the morale of the soldiers in general but everyone knows that the immediate fighting against the terrorists is being conducted by the Syrian soldiers themselves, the publication concluded.