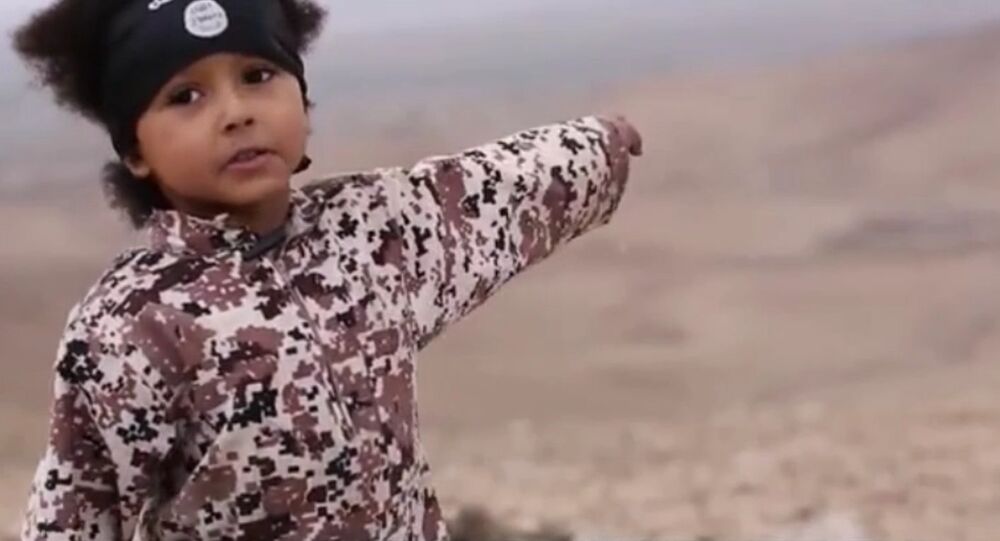 Born to Die: Daesh Shows Off its Child Fighters

These young boys are part of the twisted strategy of Daesh terrorists who have sent dozens of kid recruits to their death and boast about this on social networks, the German newsmagazine Der Spiegel wrote on Saturday citing a new study on the group’s propaganda.

© Photo : No Name
Syrian Father Recorded Video of Son Committing Suicide Bombing in Aleppo
A boy kisses his father’s hand and climbs into an explosives-laden armored vehicle. Moments later he departs on a suicide mission that ends in a massive fireball on the outskirts of Aleppo.

He is one of 89 teenage fighters and suicide bombers who the extremist group said have been killed while carrying out militant operations between January 1, 2015 and January 31, 2016, according to a report published on Friday by the Combating Terrorism Center at the US Military Academy at West Point, Der Spiegel reported.

Unlike other terrorist groups, including Boko Haram, who tend to conceal their use of children in suicide attacks because of public scorn for the tactic, the jihadists in Syria do not even try to hide their use of children on the battlefield and regularly post images of boot camps where young boys are trained to fight and kill.

The terrorist group also eulogizes its kid conscripts who have died in battle or blown themselves up in suicide missions.

According to the report, of the 89 cases, 39 percent died upon detonating a vehicle-borne improvised explosive device against their target.

Thirty-three percent were killed as foot soldiers in unspecified battlefield operations, 6 percent died while working as propagandists embedded within units, and 4 percent committed suicide in mass casualty attacks against civilians.

The final 18 percent died during marauding operations where a group of fighters infiltrated and attacked an enemy position using light automatic weapons before killing themselves by detonating suicide belts.

Roughly 60 percent of the victims, most of them Iraqis and Syrians, were categorized as “adolescent,” meaning ages 12 to 16.

The rate of child casualties is accelerating. Last January, six children died in suicide operations and this January the toll rose to 11 children.

The number of suicide bombings involving children tripled from a year ago and this disturbing trend is likely to continue, the authors warned.

“Children are fighting alongside, rather than in lieu of, adult males,” the study said. “The use of children and youth has been normalized under the Islamic State’s [Daesh] rule,” the report said.

Even if Daesh terrorists are eventually crushed by military force, reintegrating a whole generation of brainwashed children could take a while, the authors noted.