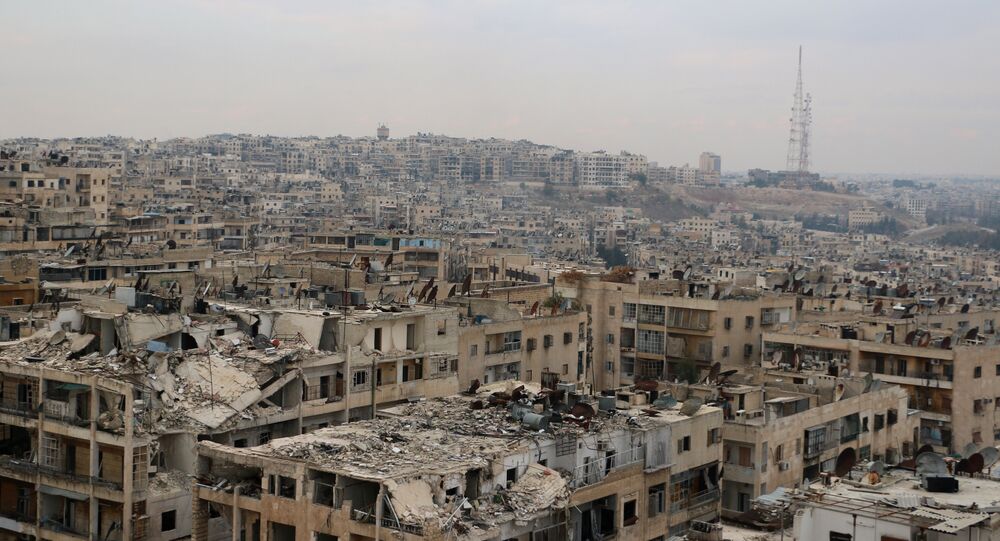 In a recent firsthand report based on his travels to Syria's Aleppo, The Spectator associate editor Peter Oborne wrote that the Syrian Army's victories in encircling the militant-controlled portions of the city are, in some ways, reminiscent of the liberation of the city of Stalingrad during the Second World War.

© AFP 2021 / RAMI AL-SAYED
'One Must Be Blind or Stupid Not to Realize That Russia is Defending Europe's Interests in Syria'
Oborne's piece, published by the conservative British news magazine last week and entitled "Aleppo Notebook: the city's terrorist besiegers will now be besieged," was based on the journalist's recent travels to the city, and his interactions with ordinary Syrians.

The article, together with Oborne's report for The Daily Mail and a televised interview he had with RT upon his return, triggered a vigorous debate in Britain, the United States and in Europe for its blunt critique of Western governments' position on Syria.

Against a tidal wave of commentary in the Western media about 'the Assad regime' and its battle against 'moderate rebels', Oborne shocked readers by openly reporting that during his travels, "again and again I was asked: why is Britain supporting the terrorists?"

'Aleppo was once the industrial powerhouse of #Syria' MUST READ dispatch from @OborneTweets: https://t.co/PxQtTcemMH

​"When I returned to London," the journalist wrote, "I read in the newspapers that this turn of events [in Aleppo] was regarded as a calamity. Of course, it does depend on your point of view. Government-held Aleppo was under siege from jihadi forces until last year. That was never reported. Now the areas of Aleppo held by the rebels are coming under siege. That is reported in the western press as a catastrophe, and has brought a concerned response from the British Foreign Secretary."

© REUTERS / Abdelrahmin Ismail
Aleppo Before and After: Syrians Sick of War, Tired of 'Marauding' Rebels
A week later, the journalist's 'Aleppo Notebook' continues to generate shockwaves, this time in Russia and the former Soviet Union, with social media users picking up on the journalist's comment that the situation in the jihadist-controlled portions of the city is now reminiscent of the situation in Stalingrad on the eve of its liberation.

"My time in Aleppo coincided with the turning point in the Syrian civil war. Assad's forces, with the help of Russian air power, cut off the line of supply from the Turkish border to the jihadist forces encircling the government-held areas of the city. Deprived of fresh fighters, guns and ammunition from their Turkish sponsors, Al Nusra and other groups encircling the city are, over the long term, doomed. Islamic State, which sells its oil through Turkey, will start to run short of money. Think of Stalingrad in 1942: the besiegers are now the besieged," Oborne wrote.

"The comparison with Stalingrad is inappropriate, I agree, but this is a signal through which the journalist is trying to reach British public opinion. Maybe it will help them to understand who is who in this war," a user named Ivan said, commenting on the RIA Novosti story.

Hopefully, Mr. Oborne's revelations about Allepoans' support for the government, about the composition of the jihadist forces occupying part of the city, and about much of the Western media's shameful support for the militants really will help not just Britons, but people all across Europe and North America understand 'who is who' in the war in Syria.