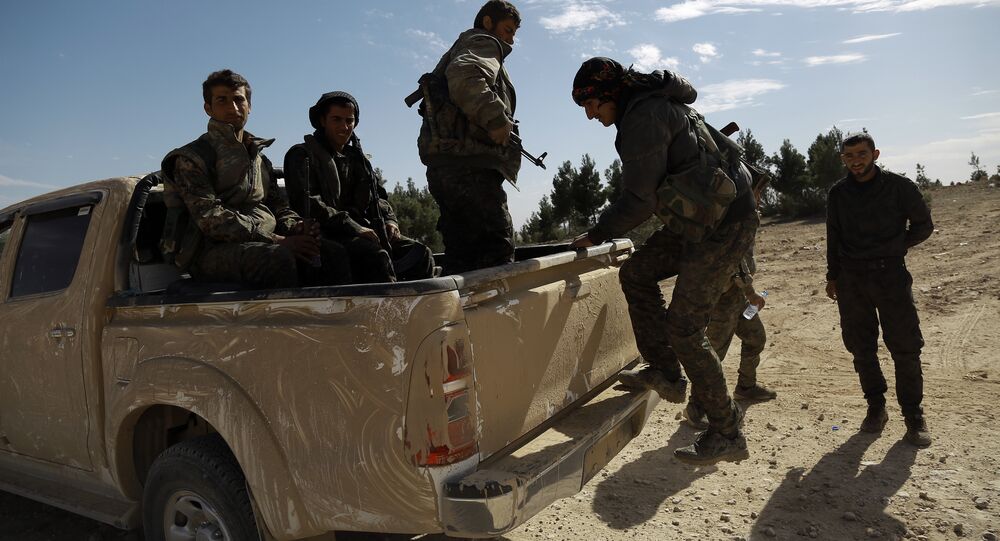 The Syrian Democratic Forces, backed by US-led coalition air strikes, has reportedly managed to retake the strategic town of al-Shaddadah in the northeastern province of Al-Hasakah.

© Sputnik / Valery Melnikov
Shot Down in a Blaze of Glory: Syrian Army Liberates More Strategic Areas Near Aleppo
The key town of al-Shaddadah in the oil-producing northeastern province of Al-Hasakah has been liberated from Daesh terrorists by the Syrian Democratic Forces (SDF) with the help of US-led coalition air strikes, according to Sputnik's Turkish edition.

Sputnik quotedTackır Kobani, a, representative of the Syrian Democratic Forces, as saying that restoration work is under way in the town, and that at least 17 Daesh terrorists had been captured as a result of a military operation to liberate al-Shaddadah.

The operation came amid reports that Turkey continues to support Al-Nusra Front terrorists in order to prevent the border town of Azaz in northwestern Aleppo Province from being taken by the Kurdish People's Protection Units (YPG) and the SDF.

In the past seven days, about 1,200 terrorists and almost 30 tons of ammunition have reportedly been sent from Syria's Islamist-held Idlib region to Azaz via the Turkish border checkpoint of Oncupinar.

The information was confirmed by YPG spokesman Firat Xelil, who said in an interview with Sputnik that Ankara renders logistical support to terrorists in Syria.

"Yesterday, at least four vans laden with arms and about 300 terrorists were delivered to Azaz through the Oncupinar checkpoint. All the terrorists were trained on Turkish territory," Xelil said.

© AFP 2021 / GEORGE OURFALIAN
Colossal Crackdown: Al-Nusra Front Confirms Deaths of 300 Terrorists in Syria's Aleppo
Syria has been in a state of civil war since 2011, with the army loyal to President Bashar Assad fighting several opposition factions and terrorist organizations, including Daesh and the al-Nusra Front.

On January 29, talks between the Syrian government and representatives of the country's opposition factions began in Geneva. UN Special Envoy for Syria Staffan de Mistura said on February 3 that the talks would be temporarily suspended until February 25.

One of Al-Nusra Front's Leaders Killed in Syrian Government Airstrike