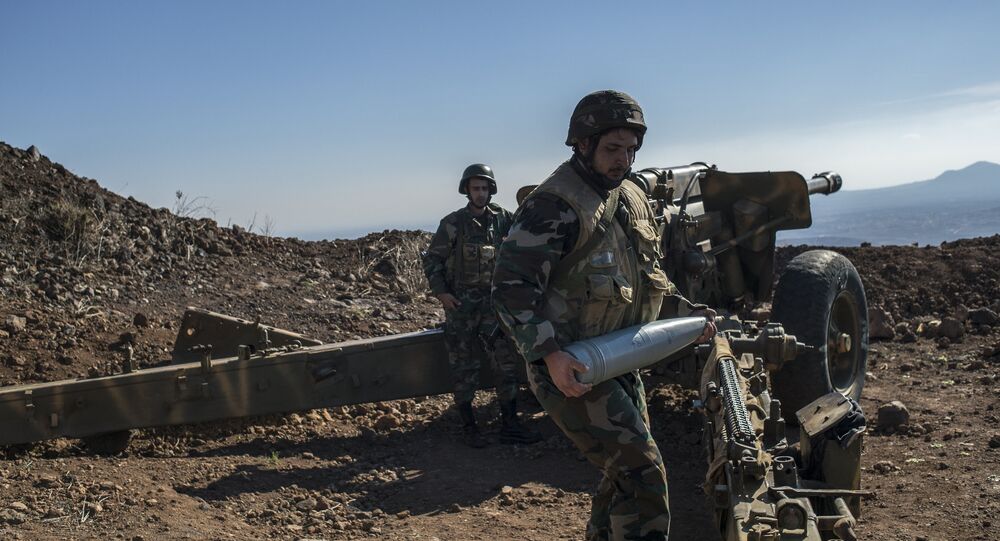 A key village has reportedly been retaken by the Syrian Army and the country's National Defense Force in the northern province of Aleppo. Jebb Ghabishah

© Sputnik / Ilya Pitalev
When the Guns Speak: Terrorists Retreat, Syrian Army Closes in on Idlib
The Syrian Army and the country's National Defense Forces (NDF) managed to retake full control of the strategic village of Jebb Ghabishah from Daesh n northern  Aleppo province, according to the Iranian news agency FARS.

© AFP 2021 / GEORGE OURFALIAN
Syrian army soldiers patrol near a building previously used for storing seeds in the countryside of Deir Hafer, a former bastion of Daesh, near the northern Syrian city of Aleppo on December 2, 2015

"The Syrian pro-government forces have been successful in the recent days, and have deployed forces within seven kilometers of closing the small gap that is under ISIL control between the al-Bab Plateau and the al-Safira Plains," FARS quoted sources as saying.

Meanwhile, army sources have reported that the Syrian troops are preparing for a new spate of military operations against the terrorist groups based in southern Aleppo province.

#SYRIA Near #Aleppo,terrorists are evacuating their families to the north of the province,to the Turkish border due to complicated situation

"The Syrian Army and the NDF are planning to conduct two separate operations in the towns of Abtayn and al-Zorba as well as in the surrounding areas of Khan Touman town," the sources said.

Earlier this week, the Syrian forces launched a number of offensives on Daesh-held positions in the towns of Al-Bab, Qabasin, and Beza, where scores of terrorists were killed in the fighting.

#SYRIA Weapons, munitions and reinforcements are delivered to militants in #Idlib and #Aleppo over the Turkish-Syrian border at nighttime

Additional militant strongholds were also reportedly destroyed by Syrian fighter jets in Handarat and Hraytan north of the city of Aleppo; the Islamists suffered heavy losses in the airstrikes.

© Sputnik / Iliya Pitalev
Russia's Involvement in Anti-Daesh Fight Changed Syria's Fate
Syria has been mired in a civil war since 2011, with government forces loyal to President Bashar Assad fighting opposition factions and terrorist groups such as Daesh and the Al-Nusra Front, which are banned in Russia.

Adding to the Syrian Army's anti-terror effort is Russia's ongoing air campaign in Syria which was launched on September 30, when more than fifty Russian warplanes, including Su-24M, Su-25 and Su-34 jets, commenced precision airstrikes on Daesh and Al-Nusra Front targets in Syria at the behest of Syrian President Bashar Assad.