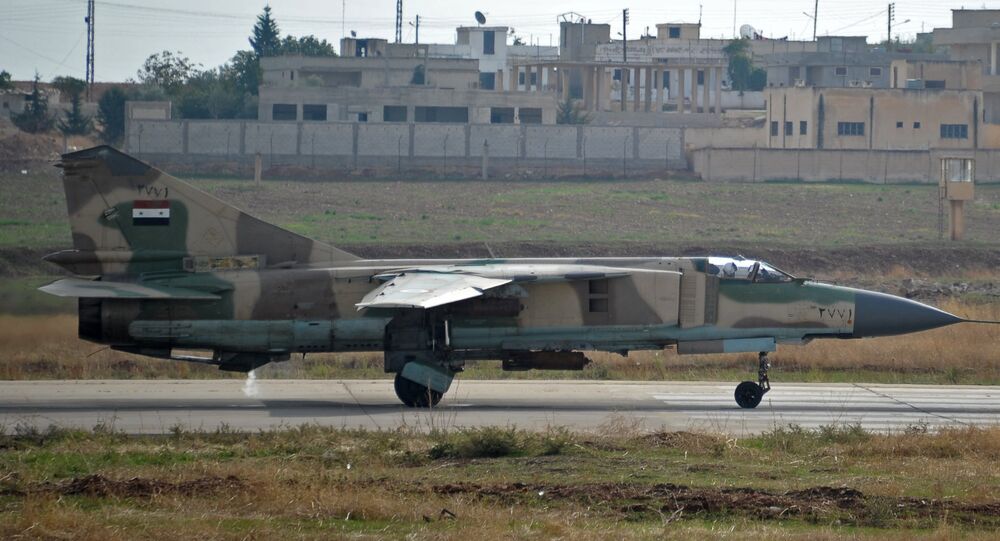 Syrian Ground and Air Forces have reportedly obliterated Daesh strongholds to the east of the city of Aleppo; scores of militants were killed and wounded.

Sources said that the Syrian troops launched a number of offensives on Daesh-held positions in the towns of Al-Bab, Qabasin, and Beza on Wednesday.

Additional militant strongholds were also reportedly destroyed by Syrian fighter jets in Handarat and Hraytan north of the city of Aleppo; the Islamists suffered heavy losses in the airstrikes.

© Sputnik / Dmitriy Vinogradov
MiG-21 aircraft of the Syrian Air Force gets ready for a mission at the Hama airbase near the city of Hama, Syria's Hama Province

In another development earlier this week, the Russian and Syrian warplanes targeted militants' positions across the city of Aleppo, damaging their military hardware in different areas of the city, FARS reported.

Also this week, the Syrian Army seized back two strategic villages in eastern Aleppo and repelled a large-scale attack by Daesh and other terrorist groups in the north of the province, sources said.

Earlier, government troops thwarted a large-scale attack by the terrorists on government forces' lines of defense in the northern part of Aleppo province.

Dozens of militants were killed or wounded after their attempts to prevail over the defensive lines of Syrian Army positions in Tal al-Madhafah in the southern part of Handarat were dashed by the government forces.

© AFP 2021 / ARIS MESSINIS
'Trying to Pull a Rabbit out of the Hat': Ankara, Riyadh 'Getting Desperate' Amid Syrian Army's Advances
Adding to the Syrian Army's anti-terror effort is Russia's ongoing air campaign in Syria which was launched on September 30, when more than fifty Russian warplanes, including Su-24M, Su-25 and Su-34 jets, commenced precision airstrikes on Daesh and Al-Nusra Front targets in Syria at the behest of Syrian President Bashar Assad.