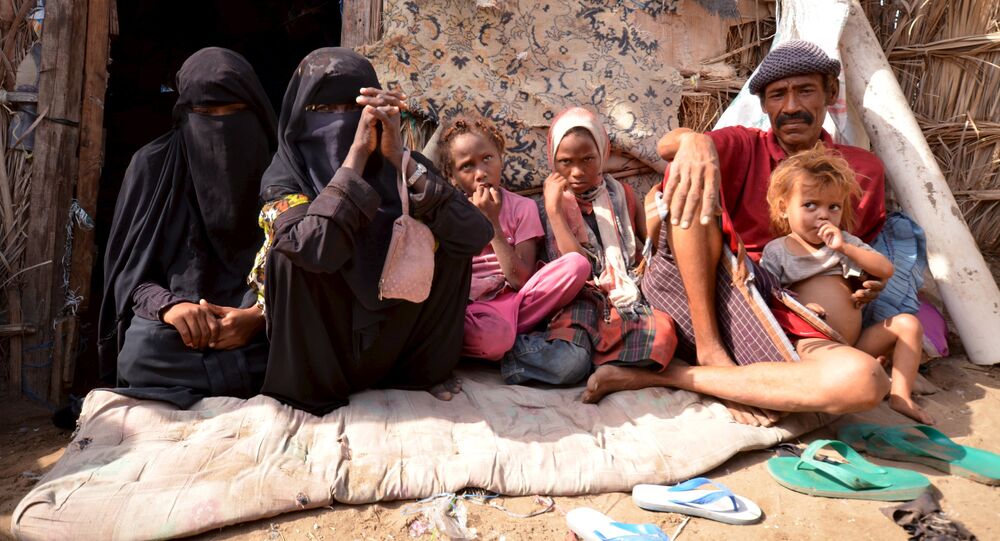 The sale of western arms to Saudi Arabia has provided a "political cover" for Riyadh to continue its bombing operation in Yemen, campaigners have told Sputnik, which comes as the UN warned that a "humanitarian catastrophe" is unfolding in the country.

With the 11-month long Saudi aerial bombardment of Houthi rebel targets continuing, critics have accused western nations — principally the UK and US — of exacerbating the conflict and worsening the humanitarian situation through their continued sale of arms to the Gulf Kingdom.

"UK arms have been central to the bombing of Yemen — US arms as well," Andrew Smith, spokesperson for the UK-based Campaign Against Arms Trade (CAAT), told Sputnik.

The criticism follows concerns raised by the UN's humanitarian chief, who said that more than 21 million Yemenis were in need of some sort of aid, with the situation resembling a "humanitarian catastrophe."

​In a briefing to the UN Security Council, following a request from Russia, Stephen O'Brien said ongoing fighting from both sides was inhibiting efforts to help civilians in need of essential supplies and care.

O'Brien said that more than 6,000 people had been killed in Yemen since Riyadh announced plans to lead a Gulf coalition against Houthi rebels in march 2015, with half of these deaths thought to be of civilians.

“Please do something to stop this war” Baraa, 13, who lives with her father in Taiz, #Yemen. @UNICEF_Yemen pic.twitter.com/iMkWCf5QYx

At least 7.6 million Yemenis were "severely food insecure," while about 3.5 children prevented from going to school.

While the Saudi-led bombing in Yemen and blockade of Yemeni ports has been widely accused of worsening the civilian situation in Yemen, many critics have hit out at the continued sale of British and American arms to Riyadh.

Despite numerous reports of war crimes and breaches of international law allegedly being committed by the Saudi strikes, Andrew Smith told Sputnik that those concerns had "fallen on deaf ears in the West."

While acknowledging that UN and other organizations must be able to actually get into Yemen to address the humanitarian concerns, Smith told Sputnik that immediately halting the sale of arms to Saudi Arabia is essential in helping the situation.

The British government has defended its sale of arms to Saudi Arabia, arguing that it has one of the most stringent arms sales policies in the world.

"It [Saudi Arabia] is one of the most brutal, barbaric regimes in the world. We saw that at the beginning of the year when it executed 50 of its own citizens and also through its conduct in Yemen."