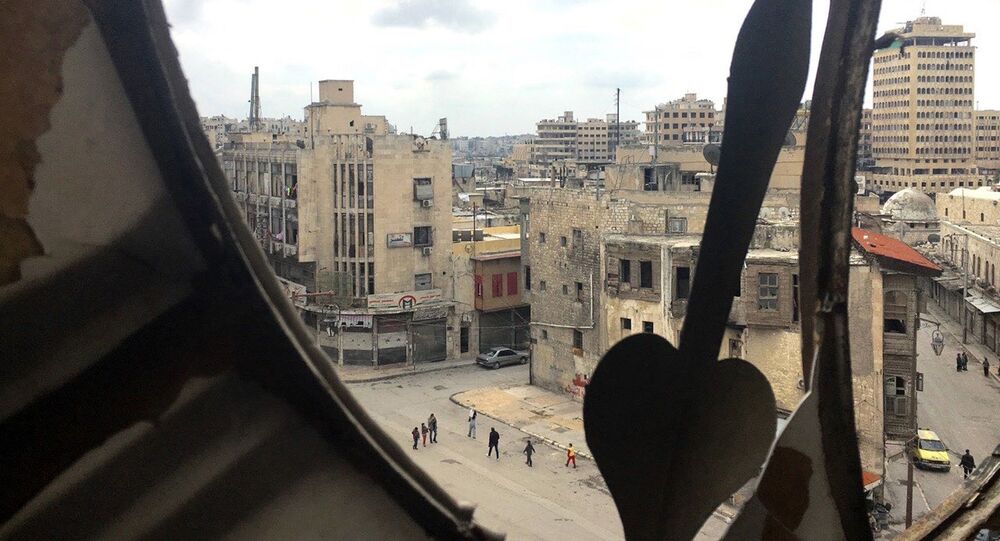 One of the most significant losses to the world's cultural heritage among the many which have resulted from the Syrian civil war has been the destruction of the ancient market town of Aleppo; Free Syrian Army (FSA) units and various terrorist groups destroyed and set fire to the shopping streets at the beginning of the conflict.

© Sputnik / Michael Alaeddin
A street in the Old Town of Aleppo.
© AFP 2020 / BARAA AL-HALABI
Why is the Liberation of Aleppo Key to the Resolution of the Syrian Crisis?
A RIA Novosti correspondent visited the ancient streets of Aleppo and found out how dangerous it is to be close to the Aleppo citadel, the centerpiece of a UNESCO-recognized cultural heritage site.

Before entering the historic center the correspondent and his team were stopped by the police. The officer asked them if they were sure they wanted to go to the center and the market. He warned them that in some streets, the militants are only separated from the visitors by a metal shield or a building.

There are enemy snipers hiding between the buildings. In order to see the ancient castle, one has to go with a guide who is familiar with the safe streets in order to avoid the militants.

Aleppo is the largest and most populous city in Syria. Various powers have fought to control the city for thousands of years. “The pearl of the city has always been the citadel — a massive fortress built on a hill in the heart of Aleppo,” the correspondent noted.

© Sputnik / Michael Alaeddin
Old Town destruction in Aleppo. This 12th-16th-century set of buildings was included into the UNESCO World Heritage list in 1986.

Even now, the fortress has not lost its strategic importance. Today, just as in ancient times, the citadel is considered to be the key to the city: from the height of the tower, defenders can fire upon their enemies in almost any part of the city.

Realizing the importance of the object, in the summer of 2012, 25 defenders of the citadel managed to keep it out of the hands of militants, refusing to surrender for over ten days.

When the tower was finally captured, the residents of the city lived in fear of daily targeted shootings for months until the spring of 2013, when the army carried out a special operation to take control of the castle.

© Sputnik / Michael Alaeddin
The Citadel, a formidable fortress built on the high hill in the heart of Aleppo, joined the UNESCO World Heritage site list in 1986.

Upon arriving at the site, the correspondent was welcomed by a tour guide, a young woman named ‘Rose’ who is also the only female fighter in the group. The team was given metal shields for protection.

Ancient Aleppo’s covered market was considered to be the largest in the Arab world. The combined length of its streets was 14 kilometers. In peacetime, one could find almost everything there; every street name reflected the goods that were sold on it (silk, gold, spices and so on). Today, aside from the debris of burnt shops strewn with shell casings, there is almost nothing left.

The tour guide explained that the militants did not hold the market territory for long. Four years ago, they were able to capture and loot it. But when the terrorists realized that they could not hold the territory, they set fire to it. The fire burned for almost an entire week, and horrified local residents were unable to extinguish it as there was fierce fighting all around the area.

“I myself saw how the guys from my squad wept when the history of their homeland was blazing into ashes in front of them. I myself was sickened to look at how the history of our ancient Aleppo was destroyed in just a few days,” the tour guide recalled sadly.

© AFP 2020 / GEORGE OURFALIAN
Feeling the Heat: Syrian Army Retakes More Strategic Villages Amid Aleppo Offensive
After leaving the indoor market behind, the team arrived at a location from where the fortress, with its impenetrable walls, was clearly visible. Rose asked them not to go beyond the last house. All the open spaces were within the sights of snipers to the east and west.

The Syrian militia uses secret underground tunnels to get into the fortress. From their vantage point, it was possible to view only the western gate of the fortress and the minaret of a mosque.

The team was perched atop the ruins of what was once, in another lifetime, the most popular hotel in Aleppo, the Carlton Citadel Hotel. Of the 30 terrorist attacks in the historic center, the demolition of the Carlton was the largest. The militants laid 55 tons of explosives, which led to the complete destruction of the hotel.

During the bombing, the left wing of the citadel was damaged and part of the wall came down. Several Syrian Army soldiers were killed but a strategic height remained under the control of the government forces.

Although the correspondent and his team could not manage to get inside the citadel, they were able to see the epitome of ancient Syrian culture in ruins, a grim reflection of an almost-ruined country. However, the fortress, which has seen centuries of conflict, could also be seen as a sign of hope that the Syrian people may one day see peace restored.