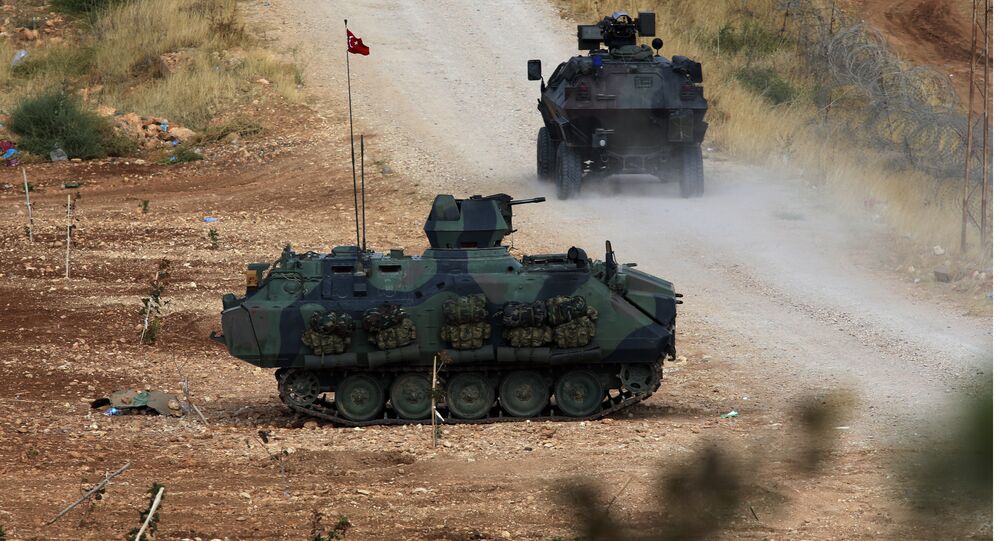 Rumors have long circulated that Turkey is planning to send ground troops to Syria. Although Ankara has repeatedly denied these claims, the ruling AKP party in fact wants to annex northern part of the war-torn Arab country, Professor Michel Chossudovsky told Radio Sputnik.

"Forthcoming planned invasion of Syria" by Turkish and Saudi ground forces, according to the geopolitical analyst, was discussed at the NATO headquarters on the same day a ceasefire agreement was reached at the Munich security conference. Director of the Centre for Research on Globalization added that Turkish and Saudi representatives were present at Friday's meeting, which was chaired by US Defense Secretary Ashton Carter.

"Turkish forces are already [in Syria]," Chossudovsky noted, referring to the unconfirmed reports that Ankara allowed approximately 100 "Turkish soldiers or mercenaries" to cross into Syria in order to support rebels fighting against President Bashar al-Assad.

© AFP 2021 / BULENT KILIC
'Indulging Ankara and Riyadh' US Risks Escalating Syrian Crisis
The new development in this context, according to the analyst, is "the fact that Saudi Arabia at the request of the United States would be involved in ground operations under the pretext of going after [Daesh] fighters, which happen to be supported, recruited and funded by Saudi Arabia."

Saudi officials made headlines earlier this month by confirming that Riyadh was ready to send conventional ground forces or special operations troops to Syria should the US-led coalition opt for this scenario. The operation, if launched, will ostensibly be aimed against Daesh, but many say that the oil kingdom in fact wants to prop Islamic radicals up.

Riyadh "is acting on the behalf of the United States. In effect, this means that US-supported forces would be inside Syria if this process goes ahead," Chossudovsky observed. For its part, Turkey "is not a 100-percent proxy of the United States. It has its own agenda. … It wants to annex part of Syrian territory."

The geopolitical analyst also mentioned that the operation is coordinated "at the level of NATO and the Pentagon." If so, then "what we are dealing with is not an invasion by Turkey and Saudi Arabia; it is an invasion which is sponsored by the United States," Chossudovsky asserted.