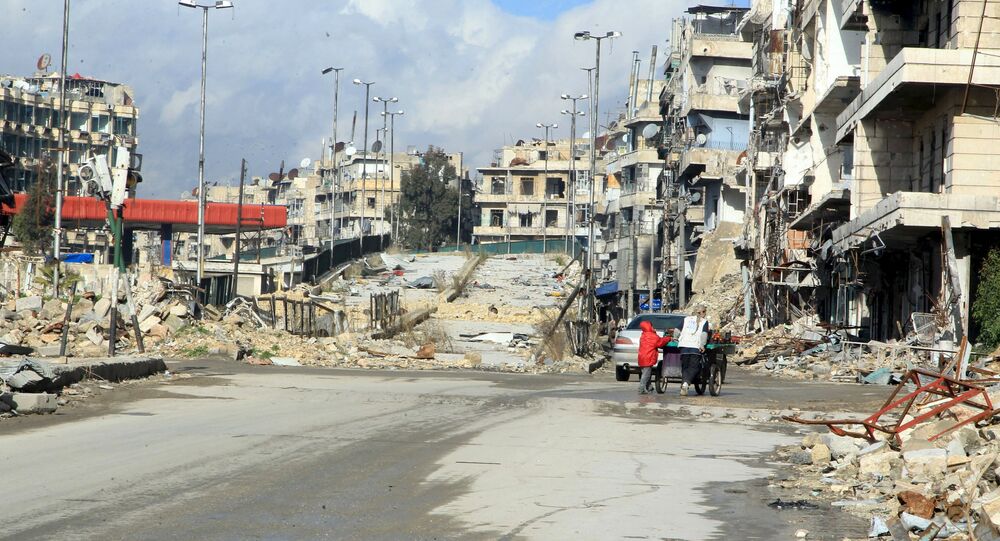 The Syrian Army offensive to liberate the city of Aleppo and its surrounding province continues; RT Syria correspondent Murad Gazdiev returned home to share his impressions about the situation on the ground there, the city's history before the war, and its fate since the ill-fated Arab Spring uprisings of 2011.

"Before the civil war began," Gazdiev recalled, "Aleppo was Syria's largest city [population 2.3 million]. It is really something of a mixing pot; you had all sorts living together there – Assyrians, Kurds, Arabs, Armenians, Turks, all living together peacefully."

Before the war, the city's ancient splendor and cultural diversity made it a source "of hundreds of thousands of tourists; there was also business, industry, finance, jobs – it was a bustling metropolis. And then of course, the civil war began…"

Before and after pictures of Aleppo, Syria. pic.twitter.com/riNqPCYFmi

​Unfortunately, the correspondent noted, "there's not a street left unmarked by fighting in Aleppo." None of the factions which emerged during the course of the so-called Arab Spring could stay out of the conflict, even though many tried.

@intlspectator #Aleppo before and after rebels' invasion of July 2012. pic.twitter.com/HMKej97OUt

​"As for the belligerents – given how much of a mixing pot the city was, you had all flavors of rebels in Aleppo at one point or another, from the 'moderate' FSA [Free Syrian Army], the Nusra Front [Al-Qaeda's Syrian franchise], to even ISIS [Daesh] in the city at one point."

Aleppo, the economic capital of Syria, before and after democratization #Syria #Asad #DemocraticDebate #DemDebate pic.twitter.com/KMhKynkKjF

​Recalling that the city was also once a prosperous industrial hub, Gazdiev pointed to a video by the Eretz Zen Syria news channel showing "rebels moving heavy machinery across the Turkish border, apparently selling it, [saying] they 'liberated' this machinery – you know, stole it."

​"Apparently, according to the Syrian government, one year into the 'revolution', a thousand factories just in and around Aleppo were robbed –pilfered, stripped of all valuables, and all the stuff sold across the border in Turkey."

"And this is not even going into the roving bands of bandits or 'rebels' – whatever they were at that point, walking around the city when they first went into it, robbing whoever they didn't like. And if they didn't like you enough, it didn't just stop with robbery or mugging –it could be fatal," the journalist said.

"Mass executions in Aleppo were not a rarity, – they weren't a unique thing They happened often," Gazdiev added, pointing to a gruesome video from 2012 showing rebels "throwing postal workers off of a roof because they worked for the government."

"At one point, rebels actually turned off electricity and water supplies to the entire city, because they couldn't just [turn off] just the government-controlled areas – so they disconnected everything, even areas that they controlled. So it is at all surprising that so many people fled Aleppo?"

So much talk about Syrian army surrounding #Aleppo but no one uttered a word when rebels surrounded Aleppo 2 years ago, cutting water & elec

​​Commenting on the one-sidedness of Western media coverage of the situation in Aleppo, Gazdiev complained that they have devoted "nowhere near as much" coverage to the rebels' misdeeds, described above, as they have for example to government forces' alleged barrel bombing.

Ultimately, the journalist noted, "Syrians themselves have grown tired of the war; all they really want is just an end to it all – just an end to the fighting."

Aid to Syria Likely to Proceed, Should Extend to Aleppo - Humanitarian Firm