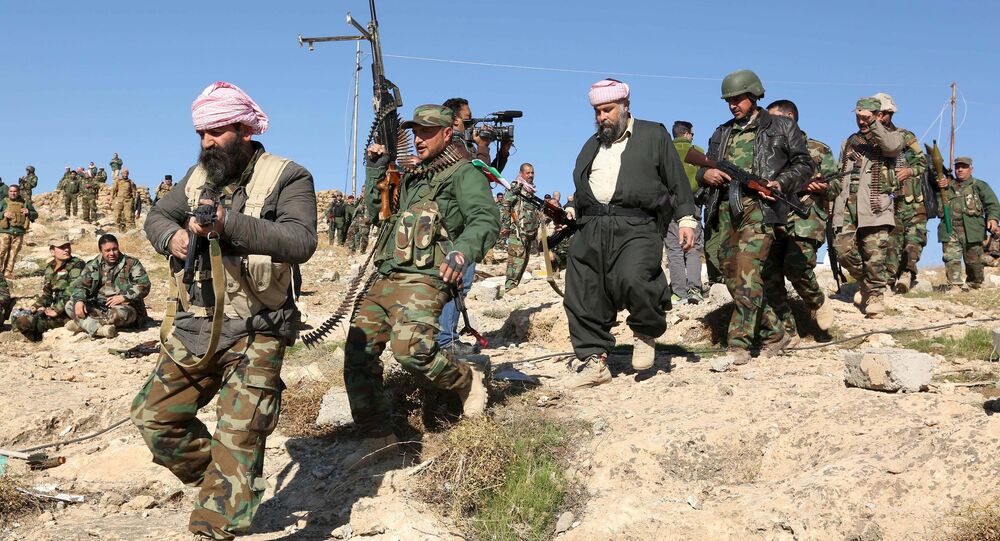 With Friends Like These: US Stalls Kurdish Offensive Against Daesh in Iraq

Kurdish Peshmerga forces in Iraq are forced to abide by the rules set by Washington, a French volunteer told Sputnik.

© AP Photo / Adam BERRY
Iraqi Prime Minister Vows to Make 2016 Daesh’s ‘Final Year’
François Mauld d’Aymée, a volunteer from France who joined the Peshmerga about a month ago, is currently stationed in the town of Sinjar, liberated from Daesh in November, about a kilometer away from the frontline.

"We’re locked in a static warfare here where the frontline doesn’t move. But Daesh fighters are about 500 meters away from us, right now even as we speak," d’Aymée told Sputnik. "They shell us with mortars and their snipers try to spot us, and we respond in kind."

He also lamented that the Peshmerga is currently unable to advance in no small part due to instructions from Washington.

"I know that the gains made by Kurds in Syria were to a significant extent made possible by Russian airstrikes… But here in Iraq, close to the Syrian border, we cannot advance because the government in Baghdad, completely subordinated to Washington, didn’t allow the Peshmerga in Iraq to advance further. If we were to attack, the coalition could’ve opened fire on us," d’Aymée explained.

He remarked that while the US-led coalition does provide air support to the Peshmerga, it’s not very effective as the airstrikes are "often launched much later than required."

D’Aymée also confirmed the presence of Turkish military units in the northern regions of Iraq.

"We’re unable to drive them off as they’re equipped with more advanced weaponry and their presence here is in a way approved by the US," he said.

Sometime after the interview, d’Aymée also sent word that Daesh had deployed chemical weapons against his unit.

"Daesh started shelling us with makeshift chlorine shells, and we only have medical masks for protection,” he wrote. “The medics were working all night. I hope that answers your question about the use of chemical weapons by Daesh."

Kurds Part of Syrian Conflict, Must Be Part of Solution - NATO