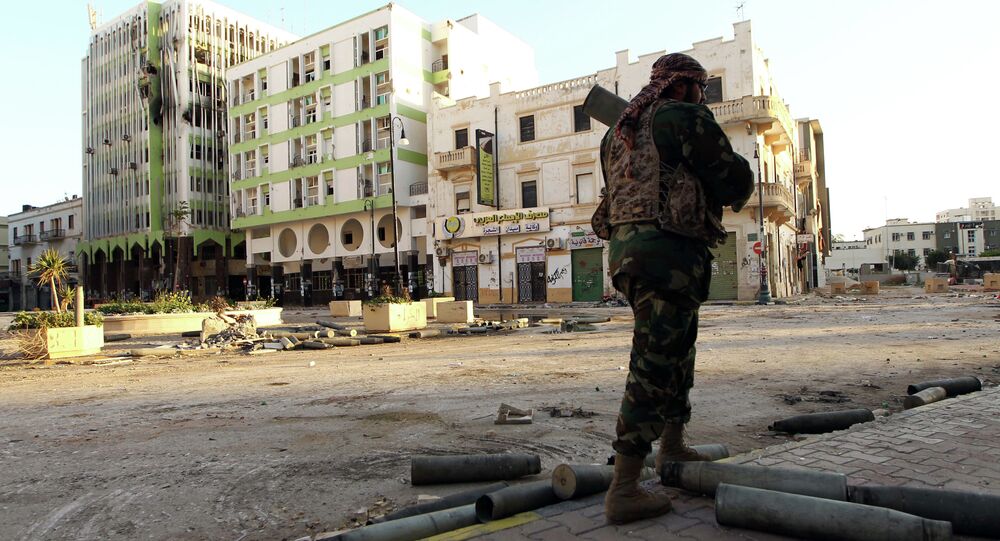 On Wednesday, the body tasked with forming a Libyan national unity government was given an extension until Sunday to do so. At the same time, with the US and several European nations itching to 'take action' in the country, members of Libya's internationally recognized government are stepping out against such a move.

© REUTERS / Esam Omran Al-Fetori
'Mickey Mouse and Coca-Cola Revolution': The Roots of Libya’s Chaos
With the Obama administration apparently "on the verge of taking action" against Daesh in Libya, and the deployment of a 6,000-strong Italian-led, British-supported brigade discussed in recent weeks, it seems that what Western nations are waiting for now is the formation of the UN-brokered Libyan national unity government in order to receive a formal invitation to intervene.

The body charged with naming the government now has until Sunday to form the new government, which needs the internationally recognized Tobruk-based parliament's approval to take office.

Ostensibly, Western powers are concerned over the establishment of a strong Daesh terrorist presence in the coastal city of Sirte; Daesh was able to gain a foothold in the country in 2014, following a 2011 intervention by Western powers against Muammar Gaddafi which led to years of instability and civil war.

Apparently taking lessons from the earlier US and European intervention, some representatives of the Tobruk parliament are stepping out against foreign intervention. Speaking to Sputnik, Bader Ali Al-Aqibi, one of the members of the Tobruk-based Council of Deputies, suggested that Western powers shouldn't hold their breath.

"God willing, the national reconciliation will be embodied within two days, today or tomorrow…Then, the government will be formed," Al-Aqibi said.

At the same time, when asked about the prospects of a Western, and particularly of a European intervention in the conflict, the politician remarked that "Europe is interested only in its own interests in Libya, and not in the interests of Libyans. The Libyans asked for weapons, but they [Europeans] refused. Now, after having seen, by their [British] surveillance planes over Libya, they know that Daesh and other terrorists are in Libya; now they started to take actions. Yet, all in all, it is all about their interests in Libya."

© AP Photo / Mohammad Hannon, File
Libya Attracting African Islamists, Daesh Fighters ‘Like a Magnet’
For their part, Russian officials recently said that Moscow would support a UN Security Council initiative aimed at lifting the arms embargo against Libya, once the national unity government and its national structures, including the military, are formed.

Al-Aqibi insisted that in contrast to both Iraq and now possibly Syria, there would not be any Western ground invasion. "No, there won't be any military ground invasion in Libya. It might be air support, logistical support and military facilities…but it is impossible that they go for a land invasion."

For their part, officials from Libyan neighbors Egypt and Tunisia also stepped out against Western intervention. Egyptian Foreign Minister Sameh Shoukry said recently that defeating Daesh should be a "Libyan-led process," with Tunisian Defense Minister Farhat Horchani adding that the world should support the Libyan army militarily, but that "it is the Libyans who must fight."

© AFP 2021 / PHILIPPE DESMAZES
Italian Operation in Libya Could Repeat 'Mistakes of 2011'
Only time will tell whether Western leaders itching to intervene in Libya once again will listen to their Libyan counterparts, and to officials from neighboring countries. Al-Aqibi, for his part, insisted that he doubts "that a military intervention [will] take place in Libya."

Libya has been in a state of turmoil since long-time leader Muammar Gaddafi was deposed and brutally killed in 2011. Daesh, the terrorist organization occupying large swathes of Iraq and Syria, seized a pocket of Libyan territory in Gaddafi's hometown of Sirte in November 2014. According to the Pentagon, there may now be over 6,000 Daesh fighters in the country, their numbers doubling over the last six months. Last month, the Pentagon said that it was considering military options to counter the threat.