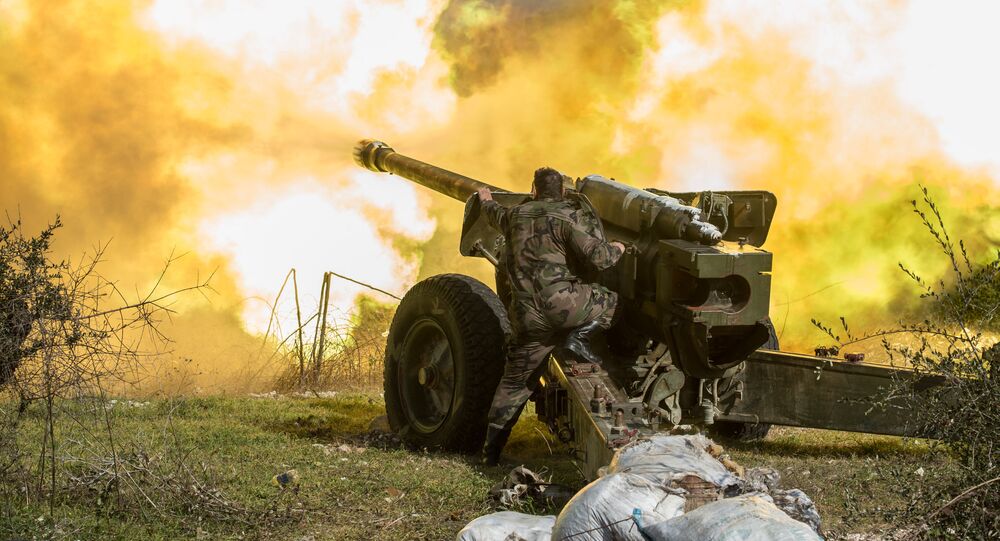 A major offensive against militant groups has reportedly been launched by the Syrian Army and the National Defense Forces in northeast Latakia Province; their goal is to advance into neighboring Idlib Province, which remains held by militants.

The militants have already called for reinforcements in a bid to try to save their last key stronghold of Kinsibba, which is located at the border with the Idlib province, according to intelligence sources.

"Heavy air and artillery attacks on the militant defense lines near Kinsibba testify the Syrian Army's firm will to conduct an imminent operation in the region to access the southern territories of Idlib Province," the sources said.

© AFP 2021 / YOUSSEF KARWASHAN
Syrian army soldiers ride a motorcycle in the village of Salma, in the northwestern province of Latakia on January 15, 2016

The fresh offensive came after the Syrian troops managed to liberate the strategic town of Bashoura, located in northern Latakia, in fighting that left dozens of militants killed and many more wounded.

The army sources said that taking full control of Bashoura had paved the way for the government forces' more rapid offensives against militants based in Latakia's mountainous northeast and the southern parts of Idlib province.

According to the sources, the Syrian Army and the NDF are swiftly advancing along several fronts in northeast Latakia as they advance on the militants' stronghold of Kinsibba.

Some sources did not  rule out  that the Syrian troops will first try to seize back the village of Kabane before launching a large-scale offensive to seize Kinsibba. Kabane is seen as a gateway to the eastern side of Kurds mountain and the militants' strongholds of al-Sirmaniyeh and Jisr al-Shughour in Idlib Province.

© AFP 2021 / GEORGES OURFALIAN
The Syrian Army is Not Attacking Aleppo But Defending It
Adding to the Syrian Army's anti-terror effort is Russia's ongoing air campaign, which was launched on September 30, when more than fifty Russian warplanes, including Su-24M, Su-25 and Su-34 jets, commenced precision airstrikes on Daesh and Al-Nusra Front targets in Syria at the behest of Syrian President Bashar Assad.