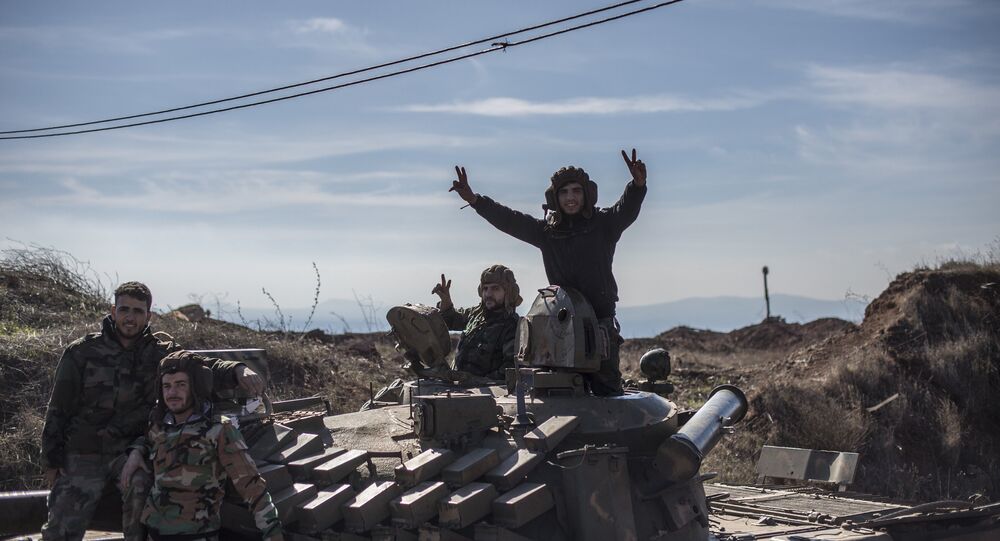 In a series of fierce clashes with terrorists, the Syrian army backed by aerial support managed to take control over a strategic town and a key height in the province of Aleppo.

© REUTERS / Khalil Ashawi
The Best is Yet to Come: Syrian Army Advancing Toward City of Idlib
Syrian government forces and their allies continued their offensive in Aleppo province, regaining full control of the strategic town of Taana in the eastern part of the region. The town came under full control of the Syrian Army on Sunday.

Meanwhile, the Syrian Air Force attacked terrorists’ position in the towns of Hayan and Hraytan.

The Syrian Army also continued to advance toward Tal Rafat in northern Aleppo.

Scores of terrorists were destroyed and injured as the army was carrying out mop-up operations in the newly regained towns.

In the countryside east of Aleppo, government troops alongside popular forces took full control over the strategic Barlaheen hilltop, after daylong clashes with terrorists.

The army backed by the Air Force also conducted a series of attacks against Daesh militants in other parts of the province, having destroyed scores of terrorists and many of their military hardware.

© Sputnik / Dmitriy Vinogradov
Syrian Army Razes Daesh Training Center in Raqqa, Advances Toward Turkish Border
The Syrian Air Force attacked a number of militants’ positions across the central province of Hama, inflicting losses and damages on them. During the airstrikes, several militant positions in the town of al-Ziyarah and villages of al-Qarqur and al-Mansoura in central Hama were razed.

In addition, Syrian warplanes alongside the Russian Aerospace Forces attacked militants across the northern part of the region. At least 10 terrorists were killed, and several military vehicles and an ammo depot were destroyed.

Tens of wanted militants turned themselves in to the Syrian authorities in Homs province as government troops continue to gain ground across the country, officials reported.

Earlier, the Syrian Army and popular forces advanced against the Daesh militants in the eastern part of Homs province and deployed their units around the town of Quaryatayn.

In the eastern part of Daraa province, terrorist groups sustained heavy casualties in clashes with the army on Sunday. Syrian troops have also scored many victories against militants in different parts of the province.

© REUTERS / Ali Hashisho
Daesh Strapped for Cash Thanks to Russian Airstrikes, Military Analyst Tells Sputnik
Syrian troops and popular forces killed and injured scores of terrorists in heavy clashes in eastern Ghouta in Damascus province. At least 30 were killed and many more were injured in fierce clashes with the army. Meantime, scores of terrorists were also killed and wounded in clashes with the Syrian army in Darayya town in eastern Ghouta.

The Syrian Air Force carried out several raids on militants' positions in mountainous areas in the northwestern province of Latakia. Meanwhile, Russian warplanes attacked terrorists’ positions in the eastern part of the province.

The Syrian Army also took full control of al-Aliya strategic village and its surrounding mountains in Latakia and destroyed a number of militants’ positions across the region.