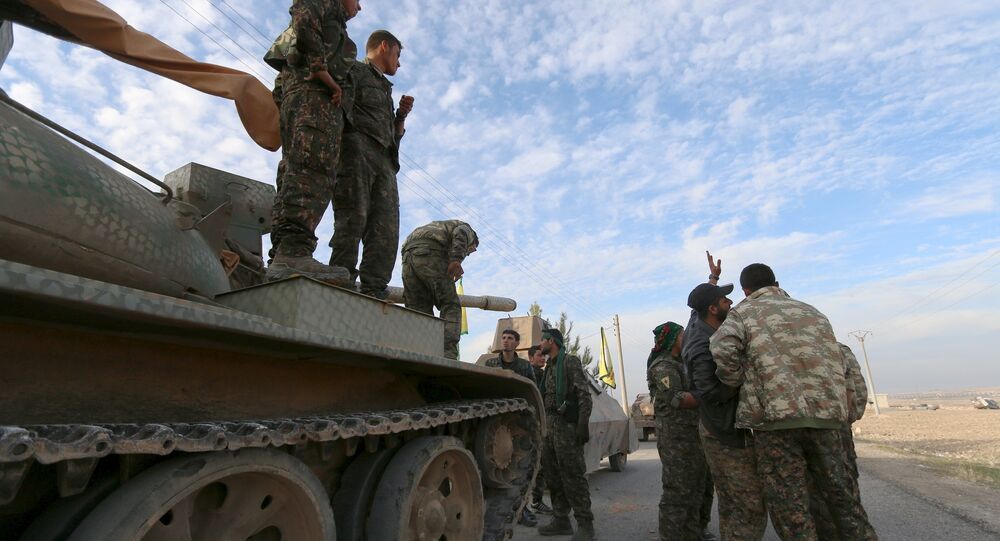 President Recep Tayyip Erdogan is losing his wits over the Kurdish issue. The Turkish leader fiercely criticized the US government after Washington sent an envoy to the city of Kobani controlled by Syrian Kurds.

The US government sent the envoy led by Brett McGurk to Kobani in Northern Syria to speak with representatives of the military wing of the Kurdish Democratic Union Party (PYD).

Erdogan was fuming about US President Barack Obama's decision to send the envoy to Kobani and meet with the PYD, whom Ankara considers terrorists.

The PYD is believed to have ties with the members of the Kurdistan Workers' Party (PKK), with whom the Turkish government is currently fighting in southeastern Turkey.

Last year, Washington partnered with PYG fighters when US-led airstrikes helped the Kurds to drive out Daesh (Islamic State) militants out of Kobani.

© Sputnik
Meet the Head of Syrian Kurds' Women Fighters, Who Kill and Humiliate Daesh
According to the Turkish government, the fact that the Syrian Kurds are fighting against Daesh on the ground doesn't disqualify them from being terrorists. During his meeting with US Vice President Joe Biden, Erdogan said that he doesn't see the difference between the PKK, PYD and Daesh.

Tensions in Turkey escalated in July 2015, after 33 Kurdish activists were killed in a suicide blast in the city of Suruc and two Turkish policemen were later murdered by the PKK, which led to Ankara's military campaign against the group.

The Kurds, Turkey's largest ethnic minority, are striving to create their own independent state. The PKK was founded in late 1970s to promote self-determination for the Kurdish community.

In December, the Turkish authorities declared a curfew in a number of southeastern regions where fighting between Ankara forces and PKK fighters continue.

US Should Do More to Arm Kurds, Tribes in Middle East – Congressman