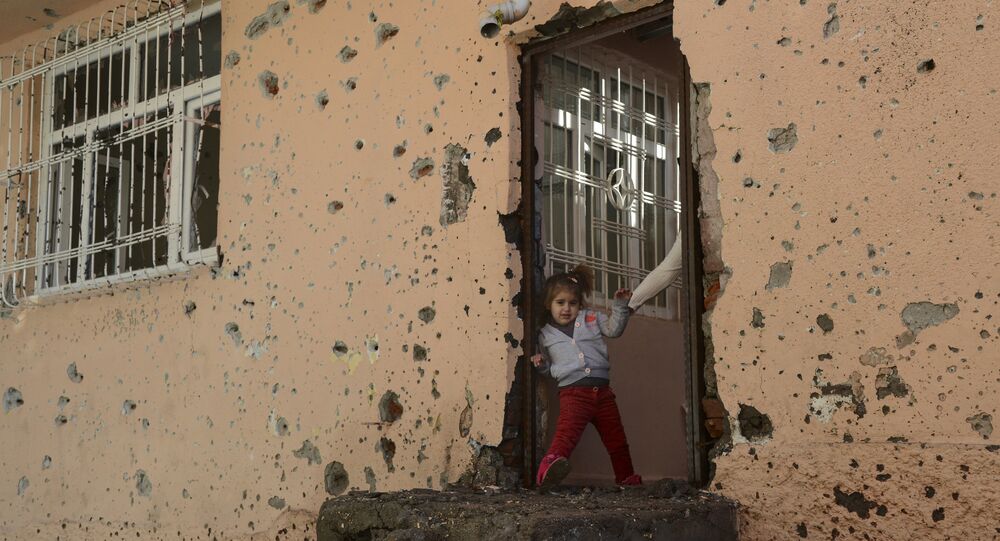 In Diyarbakir, Turkey for over a month and a half there has been a twenty-four hour protest going on with local residents and their relatives demanding the police to return the bodies of their teenage children, killed in clashes between the police and local residents.

Diyarbakir is one of the oldest cities in the Middle East and the unofficial capital of Turkish Kurdistan. More recently, its old quarters (the area known as Sur), was filled with tourists from Europe as Sur is surrounded by ancient fortifications that have been inscribed in the World Heritage List.

© AFP 2021 / LOUISA GOULIAMAKI
Turkey's ‘Fear of Kurds’ Spoils Geneva Talks on Syrian Reconciliation
Now everything has changed since the district was taken under siege by the police and the Turkish army, with snipers sitting on restaurant roofs and the district center entrenched with Kurdish activists.

Just a kilometer away from Sur in the city park called Sumer, there are large crowds in spite of the winter’s rainy weather. The local residents have been on strike for 40 days now and are asking the police to allow them to take the bodies of their dead children.

There are seven Kurdish teenagers whose names are known, who died in Sur. Their relatives still have not taken their bodies. For safety reasons the police are not permitting the parents to go into the district. Parents, of course, say that the teenagers were killed in battle by accident, while the authorities insist that all the dead were killed by militants and terrorists.

A local resident named Chukur Fakhri told RIA Novosti about the circumstances of the disappearance of her daughter, 17-year-old Rozerin.

“Today it is the 29th day since she was lost,” Fakhri said.

© Sputnik / Maksim Blinov
Turkey Still Opposes Participation of Syrian Kurds in Geneva Talks
A month ago, during a moment when the blockade of the area of Sur was lifted for a short while, Rozerin decided to go to Sur to visit friends and relatives. But the gunfire was suddenly resumed and the girl was left at the front line.

“She was left there for a week in anticipation of when she can return but then a sniper shot her in the head.” The mother said, “29 days ago, her friends told me that she was murdered.”

Turgai Girchek disappeared on January 15 when the Turkish army launched another attack on the area of Sur. There were tanks and helicopters everywhere. His father Girchek Murad and his large family (he has six children) tried to get out of the surrounded area.

“Turgai was left behind and lost; he did not get out from Sur. Where is he now we do not know, but the next day his friends who remained in Sur, told me that he was killed. Perhaps he was shot from a helicopter,” his father said.

Although one month has passed, he still does not know where his son's body is. “Maybe he is still on the threshold of our house from where we wanted to get away, but I hope that his friends had hid it,” Murad said.

In mid-January, desperate relatives even went on a hunger strike demanding the bodies of the dead to be returned or relatives access to Sur. They held out for 27 days, but did not get the permission.

“On the 15th day of our hunger strike, the police agreed to a truce. Accompanied by members of the Parliament, we went to pick up the dead bodies of sons and daughters. We were so happy, as if we were going to take them alive,” Zara said. “But suddenly the shooting started again and the soldiers did not allow them to go into the district.

The number of killed teenagers keeps changing. More murders occur and then the terrible number grows. Or vice versa someone is managed to be saved. The bodies of two young people, Isa and Mesut, were picked up.

“Their bodies have been in Sura for 28 days and we did not know where they are,” a relative said. “But we got a phone call from the police and they said that the bodies are in the morgue.”

Now gathered in Sumer park people are demanding to give the bodies of seven young boys and girls. The gathered crowd not only consists of relatives but also many more, as the tragedy in Sur is considered mutual for all the Kurds.

Kurds: The Key Beneficiary of Daesh's Rise and Fall