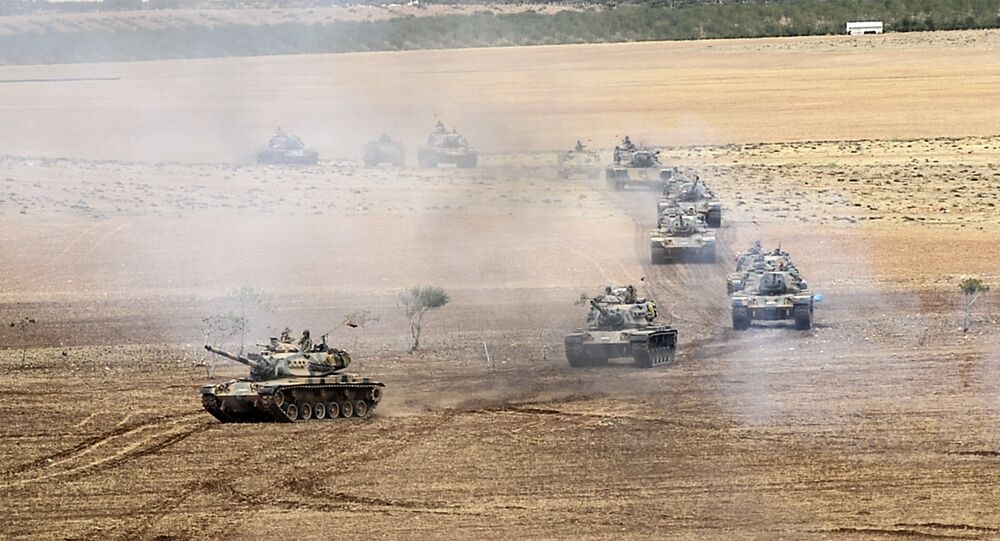 Turkish MP and member of the country’s main opposition party warned that the probability of Turkey’s military invading Syria is increasing.

© AP Photo / Alexander Kots
Turkey Planning Military Invasion in Syria - Russian Defense Ministry
Erdogan Toprak, member of the Republican People’s Party (CHP) who has served as the MP for Istanbul's third electoral district since 2011, pointed out that the recent visit of the Turkish Prime Minister Ahmet Davutoglu to Saudi Arabia has strangely coincided with the start of the Syrian peace talks in Geneva, as well as with the worsening of Ankara's relations with Moscow following the alleged violation of Turkish airspace by a Russian Su-34 warplane.

In a weekly report by the parliamentary team he leads, Toprak also noted that President Erdogan’s visit to Riyadh in December 2015 was immediately followed by an announcement heralding the creation of the Islamic military coalition, and that Turkey immediately offered to join it.

"The presence Hulusi Akar, Chief of the General Staff of the Turkish Armed Forces, among the people accompanying Davutoglu to Riyadh, as well as a group photograph featuring Akar posing together with a top Saudi official while wearing army fatigues and boots, sends a clear message: the Turkish Armed Forces are ready to take the lead role in a possible ground military action in Syria," Toprak surmised.

He also added that the Syrian Kurds’ decision not to abide by the agreements reached during the Syrian peace talks, due to them being excluded from the negotiation process, "drastically increases the possibility of Turkish military invading Syria and clashing with Kurdish forces. It also increases the probability of an open conflict between Turkey and Russia, and possibly the US, as the latter two countries support the Kurds."

Toprak also said out that a recent meeting of a team of Western military and diplomatic officials led by the US envoy Brett McGurk, also served as a show of support and a message both for the Kurds and Ankara. The US is likely warning Turkey that if the latter attempts to invade Syria to prevent the Kurds from uniting, it will end up facing more than just the Kurdish forces.