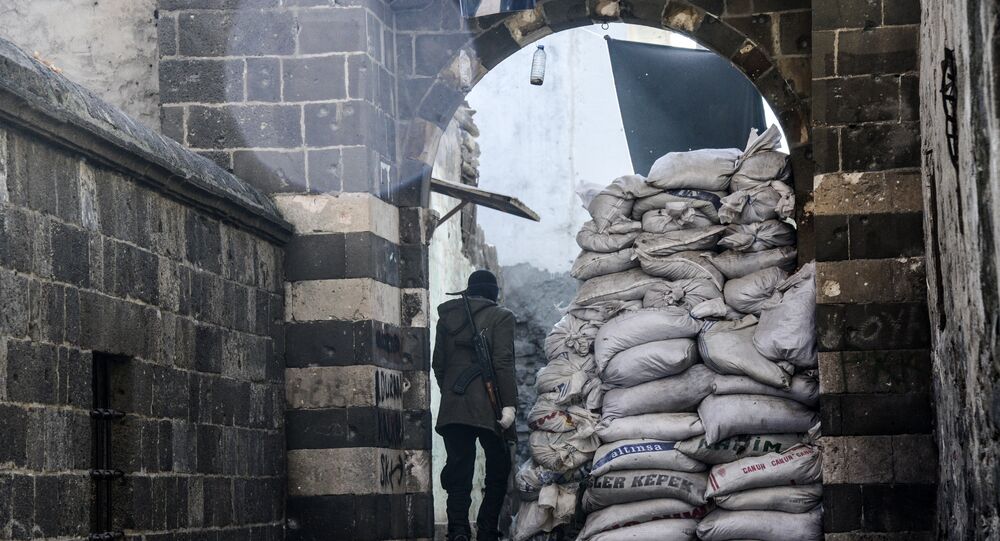 "We will reconstruct Diyarbakir's Sur so beautifully that it will become a tourist attraction with its architectural texture," Davutoglu said, speaking in the course of his visit to Riyadh to meet with Saudi officials.

Commenting on Davutoglu's statements, Zekine Turkeri, a Turkish journalist living in Spain, told Sputnik Turkey that discussing the reconstruction of Sur is nothing more than wishful thinking, and that comparing the historic district with Spain's Toledo, moreover, borders on the ludicrous.

© AFP 2020 / MURAT BAY
Three Turkish Soldiers Die in Clashes With Kurdish Militants in Southeast
"From a historical perspective, Toledo is a city of great importance. The city is famous for the fact that through its history, three cultures – Islamic, Christian and Jewish, managed to coexist on its territory. Toledo is an example of the mixing and convergence of cultures. It is also possible to cite the city as an example of a center of civilizational development, and of cultural tolerance."

"Considering what we see happening in Sur at the moment, it is especially strange to listen to the prime minister's statements," Turkeri noted.

In one way, Turkeri lamented, comparing 15th century Toledo with 21st century Sur is appropriate. "During the Middle Ages, Toledo was the center of the Spanish Inquisition. Many of the city's Jews were burned in the inquisitorial bonfires. From this perspective, the harassment faced by the population of Jewish neighborhoods in 15th century Toledo is not unlike what the inhabitants of Sur are forced to go through today."

"According to the court of the Inquisition, too, Jews were forbidden to go into the streets of the city. But in Toledo's case we are talking about the end of the 15th century."

Unfortunately, the journalist suggested, the current Turkish government will not be able to save and rebuild Sur's historical and cultural heritage, and any comparisons to Spain's Toledo are inappropriate. "At the moment, in the course of military operations, Sur is facing the deliberate targeting and destruction of everything, including its historical heritage. What kind of reconstruction work in the near future the prime minister is talking about, I simply cannot fathom."

© REUTERS / Sertac Kayar
200,000 Under Threat as Turkey Accused of Kurdish 'Collective Punishment'
Tensions in southern Turkey escalated last summer, after 33 Kurdish activists were killed in a suicide blast in Suruc. After the killing of two police officers by the PKK militants, Ankara launched a military campaign against the group. In his New Year's address, Turkish President Recep Tayyip Erdogan announced that security forces had killed 3,100 PKK militants in 2015. Another 600 are said to have been killed since December.

Late last month, a report by Amnesty International accused Turkish security forces of using excessive force in its attempts to apprehend or kill Kurdish rebels, calculating that Ankara now endangers the lives of up to 200,000 of its own citizens, subjecting them to 'collective punishment'.