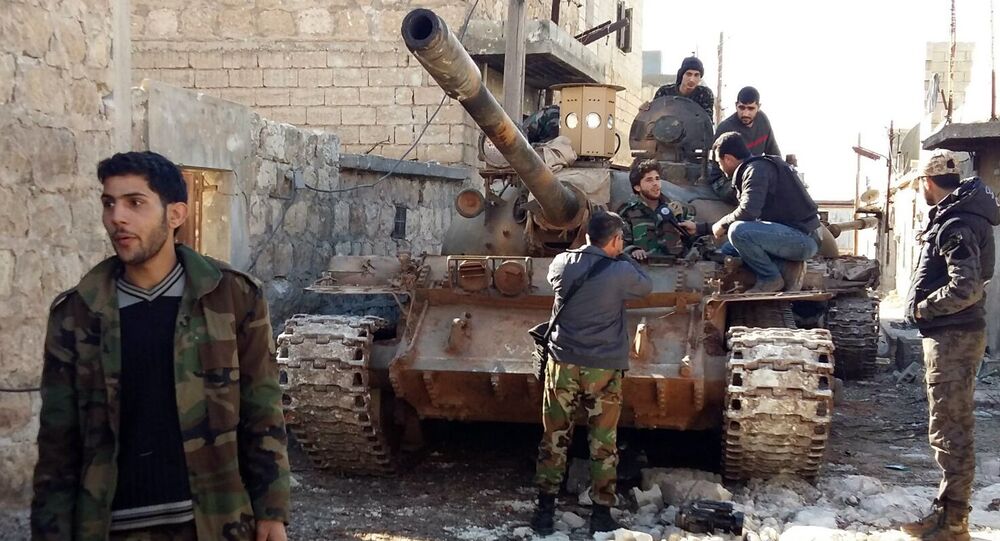 The Syrian Army and the country's National Defense Forces have reportedly won new victories over militant groups in several key provinces, including Latakia and Aleppo, in the last 24 hours.

© Sputnik
Syrian Army Liberates 18 Towns, Villages in Northeast Latakia Province
Over the past 24 hours, new military gains have been made by the Syrian Army and the country's National Defense Forces (NDF) in the key provinces, including Latakia and Aleppo, media reports said.

On Tuesday, Syrian troops managed to capture two strategic villages: Doweir al-Zaytun and Tell JaLibin near the town of Paschkoa in Aleppo Province's northern area, with other army units winning back a key mountain in a region of Latakia that borders Turkey to the north.

"The main objective of this phase is to seal the northeastern corner of Lattakia province and build a frontline at the strategic city of Jisr al-Shughour," the sources were quoted by the Iranian news agency FARS as saying.

In Aleppo, the army's new advance came after Syrian forces cut two main supply lines of Daesh (ISIL/ISIS) terrorists in the province's north, according to the sources.

"The Masqan-Aleppo and Haras-Al-Bab roads, used by the ISIL terrorists as two main supplying routes, were cut in the attacks of the Syrian fighter jets and the army's artillery units," army sources said.

Also on Tuesday, the Syrian Army continued its offensive against militants in other key provinces across Syria, including Damascus, Homs, Deir ez-Zor and Quneitra, where dozens of terrorists were killed and many more wounded.

© Sputnik / Michael Alaeddin
Russia Has Renewed Syrian Army's Confidence in Victory - Austrian Television
In the southern province of Sweida, the Syrian fighter jets, supported by the Russian air strikes, bombed a column of Daesh oil tankers in the southeastern part of the village of Shaef," the sources said, adding that most of oil tankers were destroyed and Daesh militants guarding the convoy were also killed in the air strikes.

In addition, the Russian Defense Ministry confirmed earlier this month that advanced, super-maneuverable Su-35S multirole fighters had begun their combat mission in Syria.