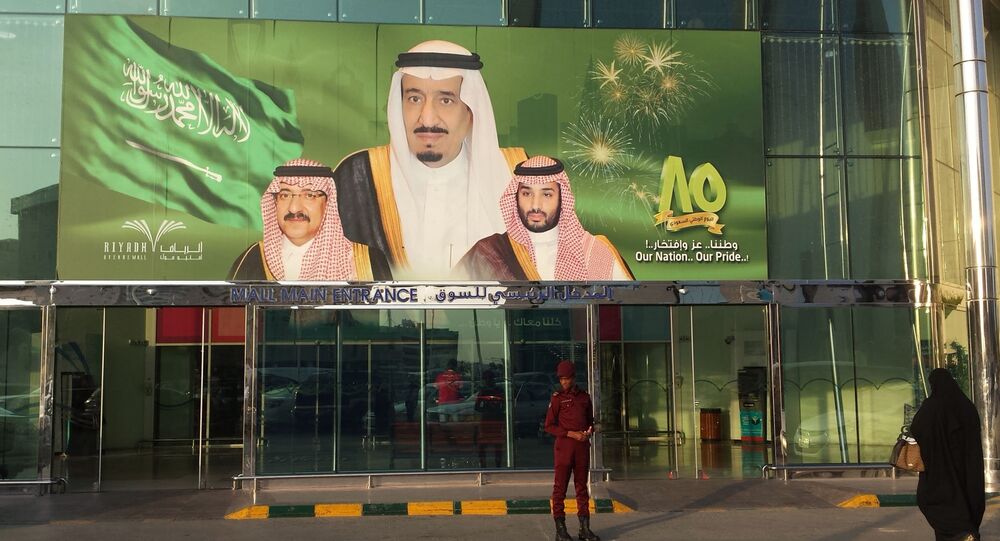 Battle Royal: The Prospects of a Palace Coup in Saudi Arabia

With rumors circulating in Riyadh over whether 80-year-old Saudi King Salman is planning to abdicate in favor of his son, which would effectively constitute a palace coup, Middle East expert Alexander Orlov provides his own take on the impact such a move would have on the Saudi dynasty, the region and the world.

© AP Photo / JOHN MOORE
Saudi Arabia Plays Russian Roulette
Last month, reports emerged suggesting that Saudi Arabia's King Salman may be planning to abdicate the throne in favor of his 30-year-old son, Deputy Crown Prince Mohammed bin Salman. Salman, 30, currently serves as the country's defense minister, and is considered to be responsible for some of the Kingdom's most brazen behavior, including the ill-fated military operation in Yemen and the execution of Saudi Shia cleric and rights activist Nimr al-Nimr.

Analyzing the possibility of a power struggle brewing in the secretive kingdom in a recent article for the foreign policy journal New Eastern Outlook, Orlov, a political scientist specializing in the Middle East, explained that for starters, any overt attempt by Salman to position his son to succeed him would violate the country's succession laws, and hence effectively amount to a palace coup.

Abdication in favor of Prince Salman, Orlov writes, would "bypass Crown Prince Mohammed bin Nayef, the country's internal affairs minister, and thus violate all [the Kingdom's] traditions of succession. After all, King Salman's son is the deputy crown prince, and his turn for the leadership should hypothetically come after Crown Prince Nayef becomes king, at which point he, Salman, will become crown prince."

© AFP 2021 / FABRICE COFFRINI
Trojan Horse? Saudi Arabia ‘Turning UN Negotiations on Syria Into Farce'
For his part, the political scientist notes, King Salman's maneuver may come down to the fact that after Nayef becomes king, the title of deputy crown prince may be abolished altogether, and Prince Salman may not get his chance to rule. After all, the title of 'deputy crown prince' "had never been part of Saudi Arabia's monarchical power structure, and was only established by the last king, the elderly Abdullah, who died a few months later, in January 2015."

Meanwhile, the country's powerful Succession Council is rumored to be split, with "its members, the elderly princes and the King's closest relatives, too conservative in their views to agree on a new system of succession to the throne, although some of them did agree with the idea 'for the good of the cause'."

"But here what is needed is unanimity, or at least an absolute majority, and not a fifty-fifty split. In these circumstances, rumors have begun to spread in Riyadh among the upper echelons of power on the possibility of a coup d'état by means of the monarch's abdication and self-appointment to the position of the 'Father of the King', followed by the appointment of his son, Prince Mohammed Salman, to the throne, without the Succession Council's approval. What's more, this change of power is meant to occur before the end of February."

"Of course," the political scientist notes, "the costs of such an option are clear and undesirable for the Saudi dynasty, but the alternative could be the beginning of the disintegration of the Kingdom, which is again facing unrest from the Shiite minority, and no money is to be found in the treasury due to a long run of low oil prices."

Things are bad, Orlov notes, "and have reached the point where preparations are being made to remove oil minister Ali al-Naimi, who is being prepared for the role of a 'scapegoat'."

© REUTERS / Saudi Press Agency/Handout via Reuters
Cracks Appear: Are Pillars of US-Saudi Partnership Trembling?
Nevertheless, the analyst suggests, with the Saudis and their US allies looking to see oil prices go down and stay down, in the interests of containing its strategic enemies – Russia and Iran, the current rulers in Riyadh do not seem likely to back down on the policy of flooding the world with cheap oil.

With an economically weakened Russia advantageous to Washington, "it is advantageous to the Kingdom, and the other monarchies of the Persian Gulf as well. This is especially true of Qatar, which is angry at Moscow for supporting Bashar Assad in Syria, Russia's interest in preventing the disintegration of Iraq, and its position on other issues in the Arab world, as well as its cooperation with Iran."

"Almost daily, Washington exhorts Riyadh to continue to keep the price of oil down. The Kingdom realizes that by doing this, they are striking a blow to themselves, and not just against Russia and Iran, but for now, US influence is simply too strong to be opposed."

And now, with the country on the verge of a palace coup, "it is no accident," Orlov suggests, "that Crown Prince Nayef interrupted this visit abroad and quickly returned to Riyadh. It speaks of one thing: that he is ready to fight for the throne."

© AP Photo / Hani Mohammed
Saudis Swear to Curb Civilian Deaths in Yemen, but Stick to Same Ol’ Bombing Tactics
In a battle between Deputy Crown Prince Salman and Crown Prince Nayef, things would look good for the young prince, the analyst notes. "Standing behind him are the armed forces and the National Guard, while Crown Prince Nayef has only the ministry of internal affairs and the police at his disposal."

As for the government, the analyst suggests that "among the country's ministers, the majority are also on Salman's side. It was not for nothing that King Salman carried out a cabinet reshuffle in April-May 2015, dismissing Prince al-Faisal, who had headed the country's foreign ministry since 1975. He was replaced by Adel al-Jubeir, who had previously served as Saudi Arabia's ambassador to the United States. Meanwhile, Adel Fakeih, [a figure] close to the clan of the reigning monarch, was appointed to the post of economy minister, with Hamad al-Sweillam appointed the head of the royal court."

"All of these personnel decisions by the new king displeased some powerful clans in the country, including the influential al-Tuwaijri family. The family's spokesman, Khaled al-Tuwaijri, who had previously served in the post of secretary of the Allegiance Council and the head of the Royal Chancery and Guard, was dismissed from all his posts and fled the country."

With most of the cards looking to be in the hands of King Salman and his son, the young prince, one fact which shouldn't be discounted, according to Orlov, is the position of the leaders of the country's tribal groups and clans, "on which the situation 'on the ground' [ultimately] depends." These groups, he recalls, "are lying low in anticipation of what happens in Riyadh. But one thing is clear: the policy of reducing oil prices has hit them where it hurts — their pockets, since they too have their quota on the proceeds of oil exports, and they are extremely dissatisfied with Salman and his family."

© CC0
Black Gold's Not-Too-Distant Future: Is Another 'Big Oil Shock' Looming?
In the final analysis, Orlov notes, "we will not have to wait long for the endgame." The main goal for Saudi authorities, he explains, "will be to prevent the disintegration of the Kingdom following the change of power," since this would "immediately affect the situation in the entire region, where Iraq is already literally falling apart, while Bahrein is on the verge of Shia revolution."

"And all this occurs against the backdrop of the war in Syria, Yemen and the growing conflict between Riyadh and Tehran, which is gaining momentum, and is fully capable of creating a Shiite crescent –the nightmare of Saudi rulers, as well as the monarchs of Qatar, the UAE and Kuwait."