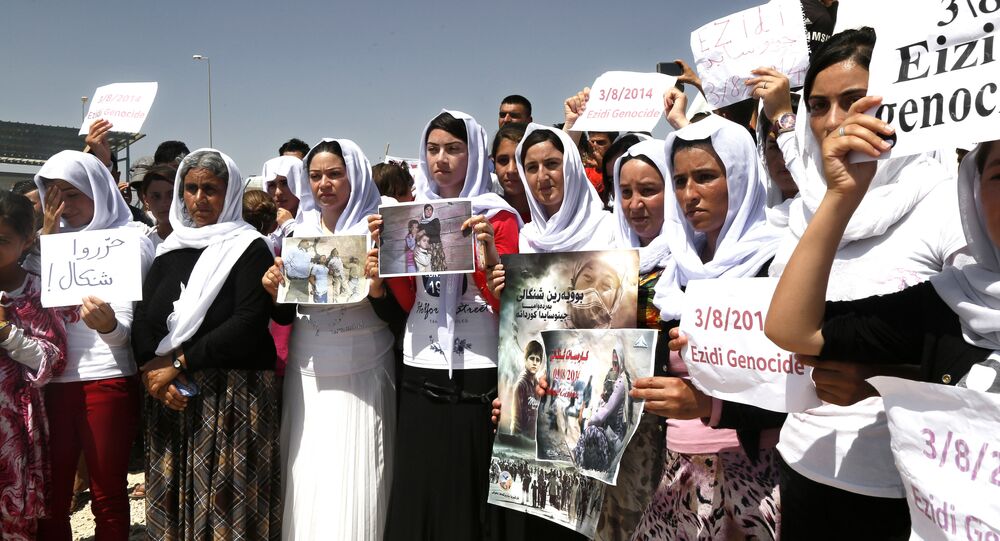 Yazidi women and girls who escaped abuse at the hands of Daesh after being captured as sex slaves have been forced to undergo traumatic “virginity tests” to prove that they have been raped, Human Rights Watch has discovered.

© AP Photo / Khalid Mohammed
‘Convert or Die’: Yazidi Refugees Escape Terror, Recall Shocking Daesh Crimes
According to a report looking into the post-Daesh fate of Yazidi women in Iraq, victims who survived rape, captivity and forced marriage were subjected to examination after believing that they had reached safety in Iraqi Kurdistan.

A report was posted on the human rights organization’s website by Rothna Begum, a WRD researcher, on Wednesday.

“Survivors my colleague and I interviewed, described organized rape, sexual slavery, and forced marriage by ISIS,” the report reads.

Rothna Begum, said she spoke to a woman called Luna who had been kidnapped by Daesh as the militants swept through northern Iraq in 2014, sold four times and raped by all her “owners.”

She was one of hundreds of Yazidi women and girls thought to have since undergone painful “virginity tests” as a way of proving the rapes to Iraqi officials documenting Daesh crimes.

© AFP 2020 / Safin Hamed
Mass Graves of Yazidi Women Butchered by ISIL Unearthed in Iraq
The victims described in the report were in need of psychological help, health care, and other services. While officials in Iraqi Kurdistan took their predicament seriously, they still forced the girls and women to undergo “virginity tests” to confirm that they had been abused.

“These tests were seen as evidence of rape by Iraqi courts,” Begum wrote.

The World Health Organization has stated that there is no place for virginity testing in modern practice, saying that the method of inserting two fingers “has no scientific validity” as it is painful and psychologically harming.

However, the good news is that the HRW has been assured by Kurdish officials that the practice will now end.

According to a chief judge at the Dohuk Appeal Court, located in the capital of Kurdistan’s Dohuk Governorate, said that the committee tasked with collecting evidence has stopped using the tests and adopted a new method of reporting coordinated with UN recommendations.

Pushing Daesh Out of Raqqa Could Take Over One Year - Pentagon