Amid constant airstrikes, stonings and beheadings, residents of Raqqa are trying hard to ignore the horrors of the barbaric Daesh (Islamic State) regime and live a normal life, hoping that one day the jihadists will go away.

"I won't leave. This is my home. This is my neighborhood. It is they [Daesh] who must leave!" — Hamdan, who is extremely unhappy about his life in present-day Raqqa, told the Slate journalist.

Hamdan and thousands of others like him have no choice but to live in constant fear and go through numerous struggles just to survive another day under the Daesh regime.

© Sputnik / Alexei Danichev
Oasis of Peace: Life in Syria’s Latakia Captured in Pictures
To survive in Raqqa, a de-facto Daesh capital, one needs to follow a set of strict interpretations of Islamic rule. Residents who aren't familiar with the jihadists' interpretation of Sharia law are forced to take courses taught by Salafi professors in recently installed mosques, Slate Magazine reported.

Daesh officials refuse to recognize a "non-Islamic education" received by people under the government of Bashar al-Assad. Therefore, everyone from that era is required to "graduate" from a Daesh indoctrination school, the source said.

Small everyday pleasures, such as smoking, music and even shaving are banned in Daesh-held Raqqa. Last November, Daesh officials banned Wi-Fi satellites and Internet cafes, cutting Raqqa residents completely off from the rest of the world. Even some coffee shops were banned and forced to close down, Slate said.

Those who break the law are subject to punishment, which might be a fine, jail time, a forced "Islamic course" or a more violent form of punishment. The most recent Daesh sanctions forced offenders to dig trenches around the city. It's dangerous work, as many of these workers have been killed during anti-Daesh airstrikes.

"People have disobeyed God, and therefore God inflicts suffering [on them]," is a common explanation to justify punishment against those who break the rules, Slate reported.

When Daesh militants took over Raqqa they forced all Kurds out of the city. As the Kurds left, Daesh confiscated all of their property. Besides the Kurds, the jihadists also scared away many Arab residents who ran from the new cruel regime. 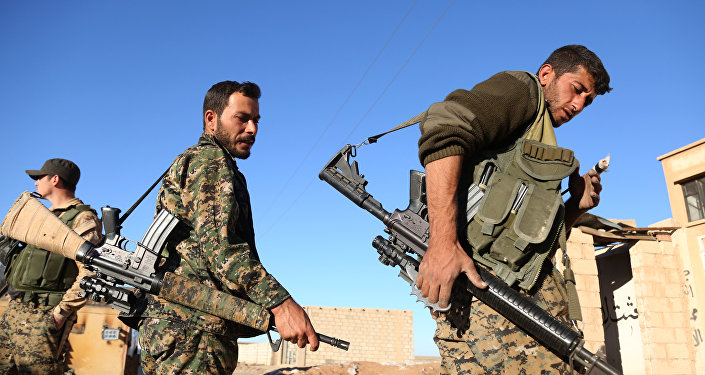 © AFP 2019 / DELIL SOULEIMAN
The End is Near: Syrian Opposition Forces on Offensive in Raqqa
The houses of former Raqqa residents were looted and then given to newcomers recruited by Daesh, many of whom were young foreigners who came to join the terrorist organization from around the world.

With international anti-Daesh operations taking place in Syria, airstrikes have "practically become a daily occurrence" in the lives of Raqqa residents. Airstrikes have already destroyed much of the infrastructure in and around the city, such as a main bridge over the Euphrates River used to enter Raqqa and many little ones here and there, Slate said.

The problem with airstrikes, the Slate journalist said, is that although they're necessary to defeat Daesh, airstrikes also hit buildings and infrastructure used by Raqqa residents, who aren't jihadists and just happened to be living under the rule of the terrorist group.

Despite these scenes, almost unimaginable to anyone living outside of Daesh-controlled territories, life in Raqqa continues to go on. Against all odds, people in Raqqa continue to work, live and enjoy whatever little things that they still can have in a world ruled by the terrorists.

That's life in Raqqa for now. Hopefully it will change soon, as the Syrian Army, backed by Russian airstrikes, have recently made rapid advances against Daesh in several parts of the country, including in areas close to the city of Raqqa. Syrian Army generals and their allies hope that their next stop will be the city of Raqqa itself.