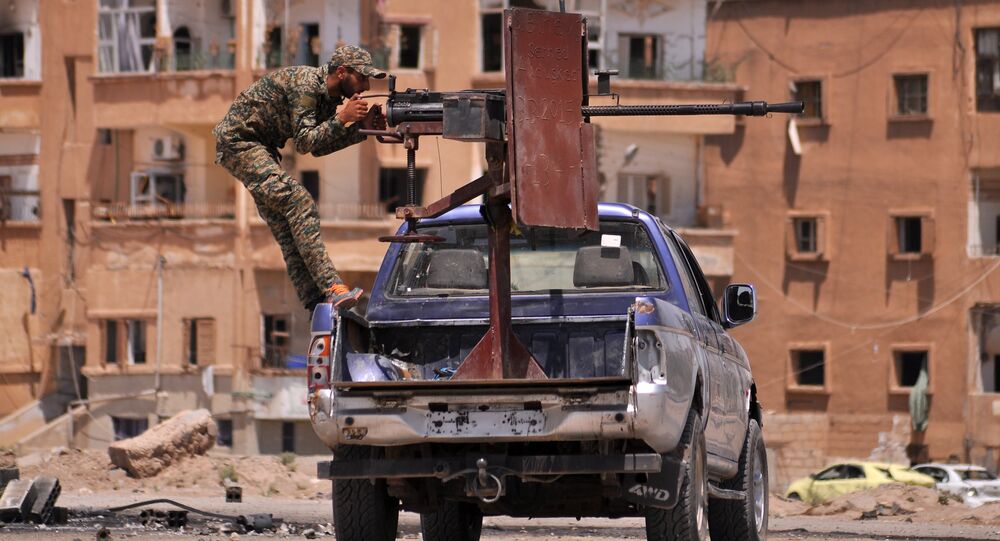 The Syrian Kurds could deal a major blow to Daesh: the People's Protection Units (YPG) allegedly plan to push the terrorist group out of key cities in northern Syria and seal a 60-mile stretch of the border with Turkey, which the militants have used to smuggle fighters, weapons and supplies to the battlefield, Reuters reported.

© Flickr / The US Army
Trouble Brewing in Syria: Is US-Led Coalition Preparing for Advance?
The Kurds, who already control the Syrian border with Turkey to the east of the Euphrates, plan to seize the towns of Jarablus, Manbij and Azaz, an unnamed source told the news agency.

Turkish authorities will likely take the news of the YPG's plans poorly. On the one hand, Ankara has failed to secure the porous border area despite repeated promises to address the issue, thus contributing to Daesh's resilience and longevity. On the other hand, the Turkish leadership views the YPG as a terrorist organization.

© REUTERS / Sertac Kayar
Turkish riot police use a water cannon to disperse Kurdish demonstrators during a protest against a curfew in Sur district and security operations in the region, in the southeastern city of Diyarbakir, Turkey January 17, 2016
© AFP 2021 / BULENT KILIC
Syrian Opposition Group to Protest Kurdish Exclusion From Peace Talks
In addition, the AKP, Turkey's ruling party, has carried out a military operation against Kurdish militants in its southeastern provinces. The crackdown, which many across the world have condemned, was launched after a two-year long ceasefire collapsed in mid-2015.

Turkey has repeatedly warned that it would not allow the Kurds to cross west of the Euphrates. Yet, the Kurds are one of the few forces that are capable of fighting against Daesh and other radical groups, who are trying to expand their reach in Iraq, Syria and beyond.  For its part, Ankara's anti-Daesh efforts have been limited in scope and efficiency.

Nevertheless, Turkey has succeeded in blocking Kurdish participation in the UN-backed peace talks, although Russia and the United States have been in favor. Representatives of the Democratic Union Party (PYD), a Kurdish political party in northern Syria which formed the YPG in 2004, were not invited to take part in the talks, scheduled to begin this week.

On Wednesday, the Turkey's National Security Council issued a statement saying that the PYD and the YPG could play "no role in the future of Syria."

Moscow has long insisted that all parties to the conflict, except terrorists, need to take part in the peace process. Otherwise, it will not bring a lasting peace to the war-ravaged country. On Tuesday, Russian Foreign Minister Sergei Lavrov reiterated that without the PYD the negotiations would not lead to "a final political settlement."

Syrian Kurds Not to Recognize Outcome of Geneva Talks