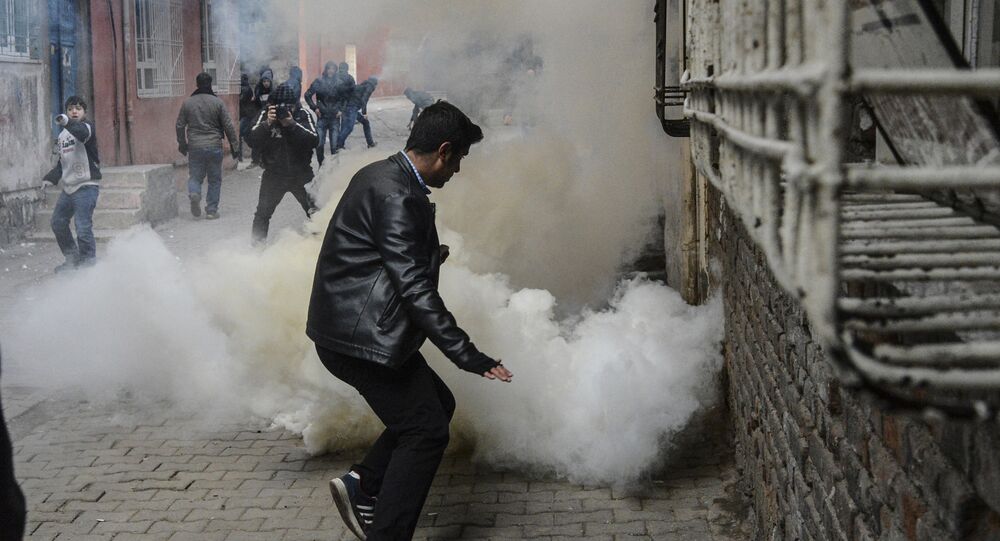 Ankara continues to bombard the Kurdish town of Cizre in southeastern Turkey and has shown no indication that it intends to resolve the crisis, according to Mehmet Tunс, one of 28 people who have been blocked in a half-ruined apartment house in the town.

© REUTERS / Rodi Said
Ankara's Whim: Will Turkey Jeopardize Syria Peace Talks if Kurds Come?
In an interview with Sputnik, Mehmet Tunс, who is among 28 people who have been blocked in a dilapidated apartment house in the mainly Kurdish town of Cizre in southeastern Turkey, said that Turkish warplanes have continued to pound the town. Meanwhile, Ankara seems to have turned a blind eye to the crisis.

He spoke after the Turkish air strikes on Cizre partially destroyed the apartment building four days ago; several floors have collapsed and at least 28 people remain trapped inside.

© AFP 2020 / ILYAS AKENGIN
A man stands in the room of a house after it was hit by a mortar during clashes with Turkish police at the Sur district in Diyarbakir, southeastern Turkey, on January 3, 2016

Four people have already died, and 24 people have been injured, Tunc said, adding that the local authorities failed to organize the evacuation of those who are trapped and that the current situation is close to critical.

"To understand the horror that is going on here, you need to see it with your own eyes. We wrapped the dead in blankets. It is very stuffy and dusty in the basement where we have been blocked, and a smell of decomposing bodies is already being felt," he said.

Tunc lamented the fact that he is unable to help the wounded get out of the basement, and that the Turkish Interior Ministry is unwilling to address evacuation-related issues.

"We are powerless to do anything. If you go out on the street, you will be shot and if you stay inside, you can be killed by a bomb. I was told that I should try to evacuate all those injured all by myself but it is impossible to do so," Tunc said.

He was echoed by Nimettullah Erdogmus, spokesman for the Kurdish People's Democracy Party, who blamed the Turkish government for its unwillingness to solve the humanitarian crisis in Cizre.

Turkey says the Kurds shouldn't be allowed to participate in the Syria talks because they're terrorists but welcomes al-Qaeda-linked groups.

"Unfortunately, the authorities refrain from openly discussing this issue with us. Probably, Ankara has preferred to lay the responsibility for the situation on the local security forces," Erdogmus said.

© AFP 2020 / AHMAD AL-RUBAYE
Turkey Warns US of Kurds’ Attempts to Create 'Corridor' in Syria
The Turkish Army's military operations against Cizre are in their third week; attacks have been launched under the pretext of combatting members of the Kurdistan Workers' Party (PKK).

Earlier, the authorities imposed a 24-hour curfew on the besieged town, where the artillery shelling by the army forces has repeatedly hit residential neighborhoods, causing more than 50 civilian casualties in the past three weeks.

According to Turkish Prime Minister Ahmet Davutoglu, Ankara's current operation against the Kurdish resistance is due to conclude by the end of January.

Protests Resume in Turkey Amid Ankara's Assault on Kurds