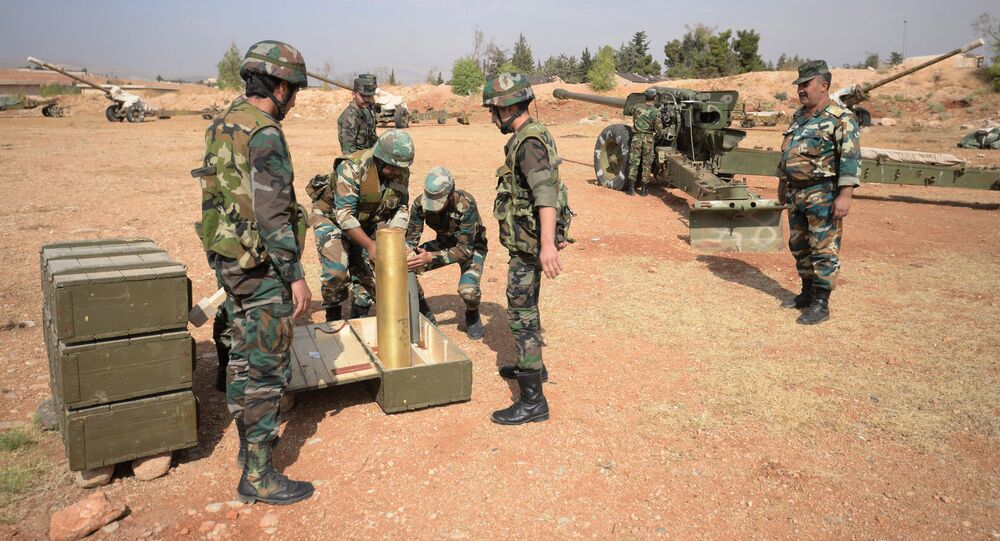 Scores of Daesh and al-Nusra Front terrorists have reportedly been killed after the Syrian Army launched major offensives in the key provinces of Aleppo, Damascus, Daraa, Deir ez-Zor, Hama, Homs and Idlib.

© Sputnik
Syrian Army Liberates 18 Towns, Villages in Northeast Latakia Province
The Syrian Army and the National Defense Forces (NDF) have staged a spate of major military operations all across Syria over the past twenty-four hours, in which dozens of Daesh and Al-Nusra Front militants were killed and many more wounded, according to media reports.

In particular, militants' strongholds were destroyed in the key provinces of Aleppo, Damascus, Daraa, Deir ez-Zor, Hama, Homs and Idlib.

In the city of Daraa, the Syrian troops obliterated the militants' fortifications, hideouts and vehicles in the neighborhoods of al-Mahatta and al-Balad, also striking the towns of Rakham and al-Karak in Daraa Province's northeast.

© REUTERS / SANA/Handout via Reuters
Syrian army soldiers, members of security services and civilians inspect the site of two bomb explosions in the Syrian city of Homs, Syria, in this handout picture provided by SANA on December 28, 2015

In another development, the army, backed by the Russian and Syrian warplanes, managed to drive the militant groups out of the strategic city of Sheikh Meskeen.

"The Syrian Army and the NDF continued to advance against the militants in Sheikh Meskeen and took full control over the strategic city after killing and wounding scores of terrorists," an army source said.

In the city of Aleppo, Syrian Air Force fighter jets destroyed positions held by Daesh militants in the neighborhoods of al-Rashedin, al-Lairamoun, Bustan al-Bacha, Bani Zaid, Karem al-Maysar and al-Sheikh Said, as well as a number of strategic areas in the eastern part of the province.

Dozens of Daesh terrorists were also killed in Deir ez-Ezor, where the Syrian forces clashed with militants in the village of Baqaliyeh and the al-Rushdiye neighborhood in the city of Deir ez-Zor.

In Damascus, the Syrian Army and the NDF launched an attack on the checkpoints of Al-Nusra Front militants, seizing back one of their main supply lines in Western Ghouta. Additionally, the army cracked down on al-Nusra Front terrorists along a road linking the two strategic cities of al-Moadhamiyah and Darayya.

© AFP 2021 / GEORGE OURFALIAN
Take Cover, Daesh: Syrian Army Continues to Destroy Militants in Aleppo
In a separate development earlier this week, the militants' strongholds based near the town of Tamanna in the south of Idlib Province and in Kafr Zita in the northern part of Hama Province were reportedly massively bombed by Syrian warplanes.

As for Russia's ongoing air campaign in Syria, it was launched on September 30, when more than fifty Russian warplanes, including Su-24M, Su-25 and Su-34 jets, commenced precision airstrikes on Daesh targets in the country at the behest of Syrian President Bashar Assad.

The Russian General Staff said on Monday that combat aircraft from the Russian air group in Syria had carried out 169 sorties in the previous three days, hitting more than 480 terrorist targets.