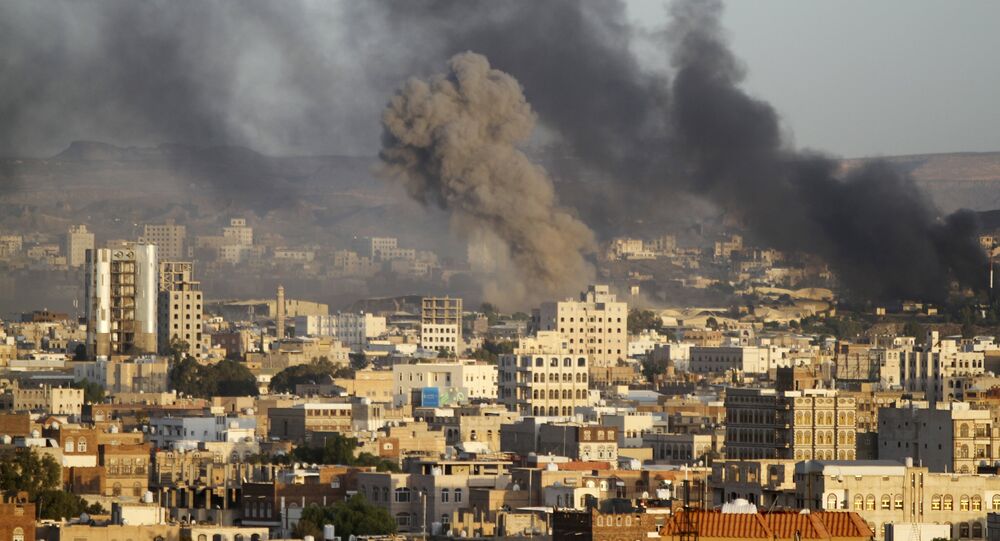 Since March 2015, a Saudi-led coalition has been bombing Yemen after Houthi rebels toppled its government. According to political analyst Catherine Shakdam, the international community turns a blind eye on Riyadh's war crimes in Yemen.

© AFP 2021 / MOHAMMED HUWAIS
Two Arab Coalition Airstrikes Hit Yemen Intelligence HQ
At least 20 people, including rescue workers and an ambulance driver, were killed recently in a series of airstrikes Saudi Arabia carried out on one target in the Yemeni province of Saada.

The "Medecins Sans Frontieres" (Doctors Without Borders) humanitarian-aid organization said a driver of one of its hospitals was killed.

This is not the first time the Saudi-led coalition has carried out a series of airstrikes against one target. The sports events center in the capital Sanaa was destroyed in seven bombardments. The operation was carried out to support the Yemeni government-in-exile in its fight against Houthi rebels.

Coalition representative Ahmad Assiri said the kingdom is not responsible for victims of the war.

UN Photo/Mark Garten
UN Chief Condemns Latest Attack on MSF Hospital in Yemen
"We regret any civilians killed and wounded in Yemen. But we should not forget that Houthi rebels and the coup they staged plunged the country into chaos," he was quoted as saying by RT.

Catherine Shakdam is a political analyst, writer and commentator for the Middle East, did not agree with this.

The Saudi campaign against Yemen, one of the world’s poorest nations, has been underway for over 10 months, and its results are unclear.

The Saudis have succeeded if their goal was to kill as many Yemeni people as possible or if they wanted genocide in the country. At the same time, the international community has not even lifted a finger over the situation, Shakdam said.

She explained why the international community has not commented on Saudi airstrikes in Yemen.

"This is all about money. Saudi Arabia is very rich and can control mass media. The kingdom also can bribe its political allies," she said.

It is unbelievable that it has been 10 months since the airstrikes started and no efforts has been made to settle the conflict, Fadl al-Mutaa, a member of the Yemeni party Ansar Allah, told Sputnik Arabic.

"They have been attacking Yemen with their deadly weapons for over 10 months. They are bombing everything, from schools and hospitals to airports and water storages, and even mosques. They are killing women and children. And the international community is doing nothing," he said.

"We can only rely on Russia and its president, China and Iran that proved the efficiency of their actions," he added.

According to him, many foreign fighters, including from the US, Britain and France, have been captured in Yemen and then released in exchange for food and medicine supplies to the conflict zone.

He also said that the Yemeni government respect Russia’s stance toward the issue and wants to have good relations with Moscow.