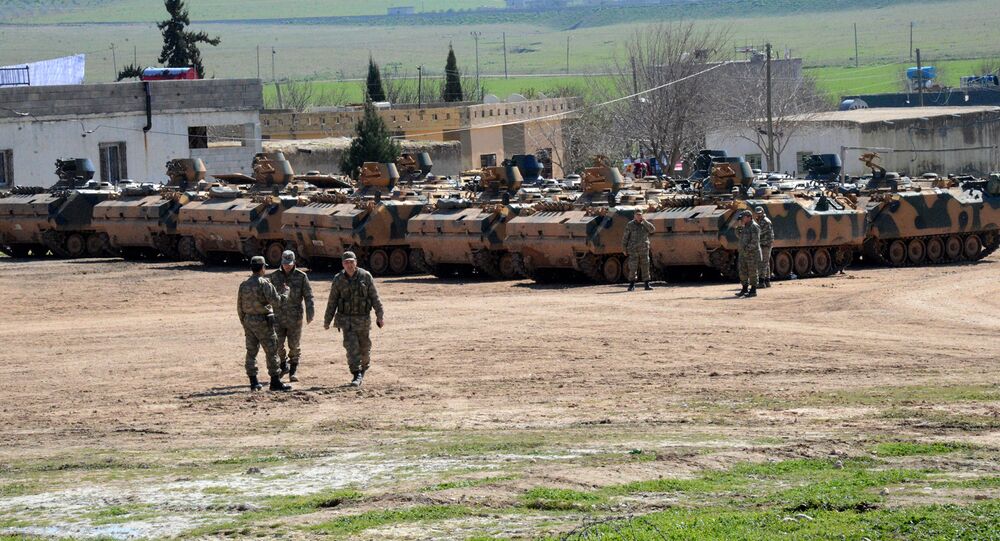 On Tuesday evening, the Turkish army reportedly entered Syrian territory near Jarablus. While ostensibly aimed at liberating the city from Daesh, the operation may have more to do with keeping Kurdish People’s Protection Units away from the Turkish border.

According to information received by Sputnik Brazil, Turkey has been amassing military units along the Syrian border. The number of troops is estimated to be around 1,000.

The troops have reportedly crossed into Aleppo province, according to Hawar News, along with military vehicles, heavy equipment, and mine detection gear to dismantle minefields installed by Daesh, also known as IS/Islamic State.

The operation is ostensibly aimed at combatting Daesh, who have fortified Jarablus. But sources tell Sputnik that Ankara may be more interested in preventing the YPG from gaining a foothold in a region of strategic importance. Hawar also reports that the Turkish troops have not engaged Daesh militants in the area, and that members of the terrorist organization have remained unresponsive to the Turkish presence.

Turkey has long been fearful of YPG’s presence along its border, and has warned the group that any advance west of the Euphrates could result in a military response.

The Turkish government has also been engaged in security operations against Kurdish communities inside the country since July. Turkish Prime Minister Ahmet Davutoglu announced that those operations – which have left hundreds dead, including civilians – are nearing an end, but political activist Taylor Goel has told Sputnik that the peace process is more about theatrics.

"Solving the Kurdish problem has nothing to do with peace. It is a peace process in name only, and a scapegoat for the ruling party," Goel said.

"The current peace process only serves to legitimize the actions of AKP [the Justice and Development Party]. The government may stop its campaign, but it’s important to remember that this is a peace process in name only."

The Erdogan administration has also cracked down on academics calling for an end to Ankara’s brutal treatment of the nation’s Kurdish population. Last week, 18 academics were arrested on charges of "terrorist propaganda" after signing a petition expressing their concerns.