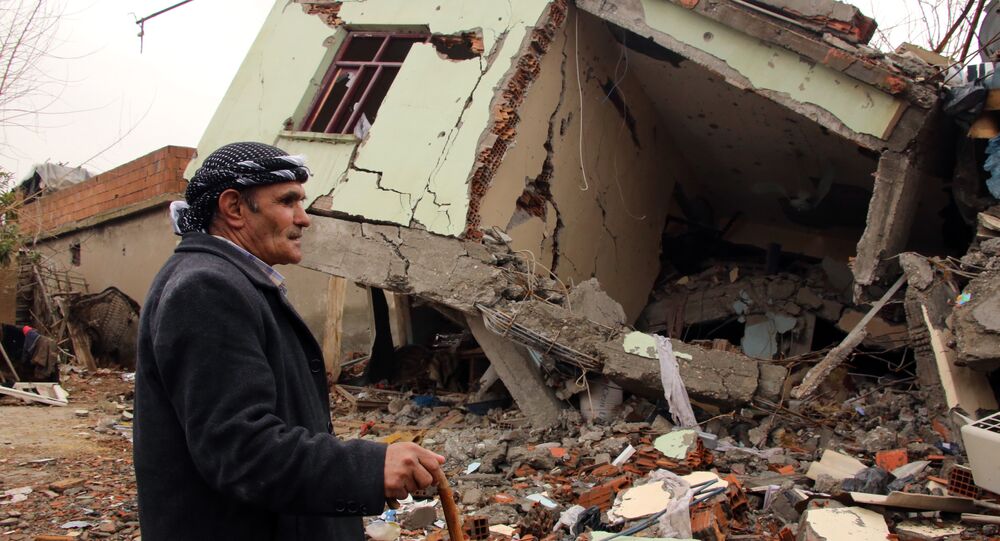 While the Turkish government has claimed that its campaign against Kurdish militants is nearing an end, an activist speaking to Sputnik explains how President Recep Erdogan’s race war against the Kurds was never anything more than political opportunism.

"Solving the Kurdish problem has nothing to do with peace," political activist Taylor Goel tells Sputnik. "It is a peace process in name only, and a scapegoat for the ruling party."

As Goel explains, the roots of the most recent military campaign against Kurdish militants in southeastern Turkey can be traced to last June, when the leading Justice and Development Party (AKP) lost parliamentary elections.

"This was done to secure its [the AKP] place," Goel says.

The strategy appears to have worked. In November, the AKP regained control of parliament following general elections. It is only after having achieved its goals that the Turkish government is willing to settle on an agreement to deescalate tensions.

"The current peace process only serves to legitimize the actions of AKP," Goel says. "The government may stop its campaign, but it’s important to remember that this is a peace process in name only."

While an end to a campaign that has killed hundreds, including civilians, is undeniably welcome, Goel points out that true peace can only come when Turkey's workers come together to put an end to the "rule of the bourgeoisie."

"The true hope of long-lasting peace in Turkey…can only come if Turkish and Kurdish workers come together to overcome this system that depends on the exploitation of the working class as a whole."

"The process is to a large extent completed," he told reporters. "It won’t be like with old operations, withdrawing after streets are cleansed. There will be a more orderly security presence. The goal is to build a public order…in which no illegal structure can take control of any streets."

Davutoglu stressed that the city of Silopi, which has seen some of the worst violence, will remain under a strict curfew. This will remain "in place for some time until we are sure the residents’ security is guaranteed."

According to estimates by the People’s Democratic Party (HDP) of Turkey, roughly 100 civilians have been killed during the conflict.

On Monday, Turkish forces launched mortar attacks on the Cizre district of Sirnak. The incident destroyed a number of homes and killed a civilian.