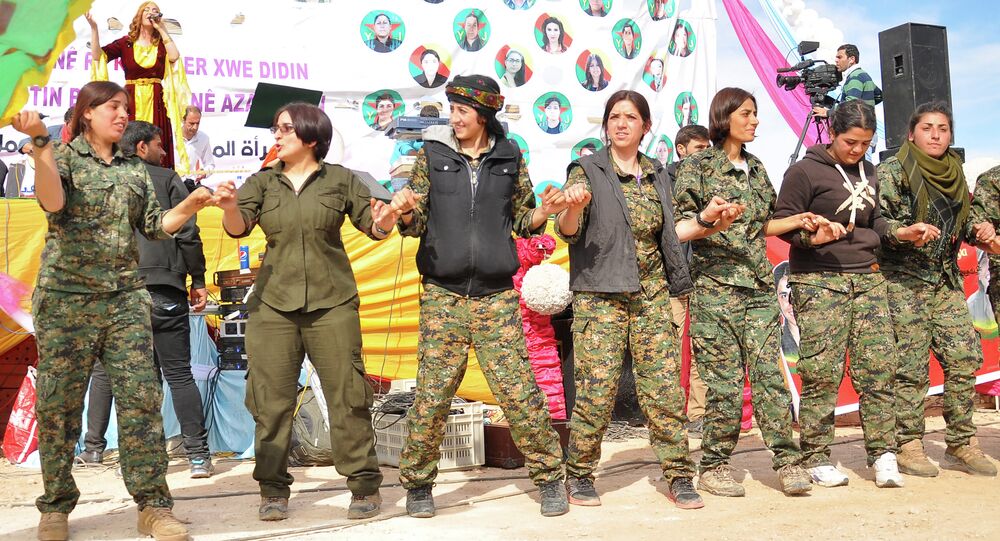 Kurds in Syria have long demanded participation in the peace talks in Geneva. Not long ago, a delegation from Damascus paid a secret visit to the Hasakah province to negotiate terms, according to reports.

© AFP 2021 / Delil Souleiman
Unknown Side of Anti-Daesh Fight: Why There Are So Many Women Among Kurdish Fighters
Top-level Syrian officials recently met with leading Kurdish self-defense units and political parties to discuss their involvement in the forthcoming Geneva 3 talks on the future of Syria to be held January 25, Iraqi Kurdish news outlet BasNews reported.

A number of high-ranking military officials, headed by Mohammad al-Shaar, the Interior Minister of Syria, reportedly traveled to the majority-Kurdish town of Qamishli on the border with Turkey.

The Kurdish Democratic Union Party (PYD) hosted their negotiations with the People’s Protection Units (YPG) alongside the Kurdistan Workers’ Party (PKK), according to BasNews.

© AFP 2021 / Fabio Bucciarelli
Split up: Defiant Kurds, Assyrians Called ‘Traitors’, Abandon Syrian Opposition Bloc
Meanwhile, a campaign has been launched by the Kurdish National Council in Syria (ENKS) to bring to the world’s attention the status of the Syrian Kurds during the upcoming Geneva talks. A petition addressed to the UN Secretary-General Ban Ki-moon is aimed at gathering a million signatures, local media reported.

“The petition emphasizes the role that Kurds have played in Syria and asks that people be included in the decision-makings about their future,” Ibrahim Biro, head of ENKS, commented to Kurdistan24. “We want to tell the United Nations and the international community that the [Kurdish] people [in Syria] are the decision makers in such significant matters, and that politicians should not be the only ones who have a say in the destiny of our people.”

© AFP 2021 / DELIL SOULEIMAN
Kurds in the Mix: Real Reason Behind Russo-Kurdish Cooperation
Russia objected to excluding Kurds from Syrian peace negotiations after they were not invited to the Syrian opposition summit in Saudi Arabia mid-December 2015. Russia’s Foreign Minister Sergei Lavrov stressed that the Vienna-format talks on resolving the long term Syrian civil war must include of all the country’s opposition groups, as well as a delegation from Damascus.

Earlier, Syrian President Bashar Assad stated that Kurdish autonomy could only be discussed after a victory over terrorism.

Salih moslim, #PYD co-leader, told: in case of excluding the #Kurdish groups from #Geneva 3 talks on #Syria, they will rejects all outcomes

​Kurds comprise some 10% of the population in Syria and have formed a self-governing autonomy dubbed Rojava (“West” in Kurdish), consisting of four cantons, with its own constitution based on the principle of direct democracy. The battle-hardened Rojavan self-defense units, People’s Protection Forces (YPG) and its female branch (YPJ), have proved one of the most effective ground forces against jihadists of Daesh and al-Qaeda (Nusra).