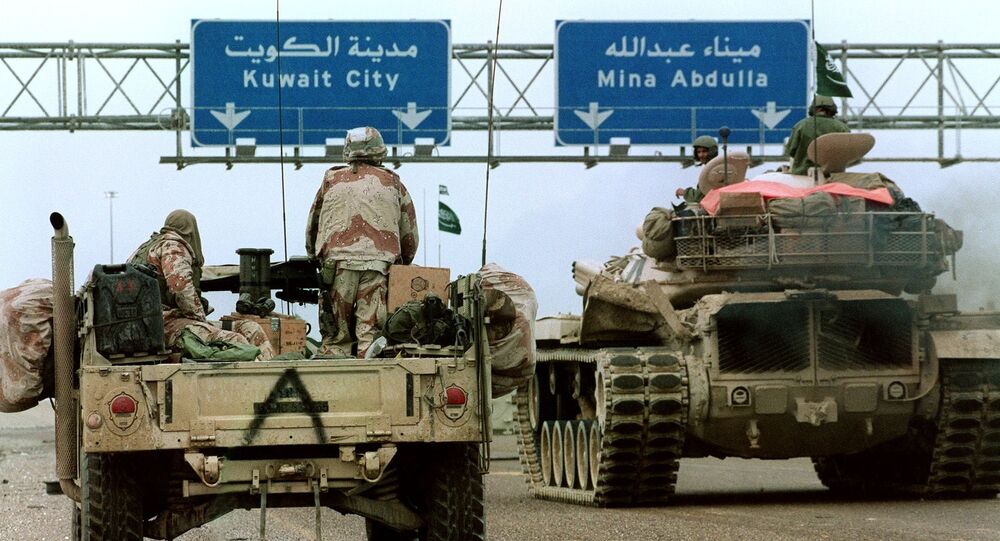 Operation Desert Storm: Kicking Iraq Out of Kuwait 25 Years Ago

17 January is a day of the 25th anniversary of Operation Desert Storm, launched by the United States against Iraq.

© Wikipedia / Jonas Jordan
Petropolitics 101: Why Waging Oil Wars is a Bad Idea
MOSCOW (Sputnik) – Sunday marks the 25th anniversary of Operation Desert Storm, the US-led coalition’s military campaign against Iraq launched in response to the invasion of Kuwait by Iraq.

In 1990, a conflict flared up in the Persian Gulf region. Iraqi President Saddam Hussein accused neighboring Kuwait of siphoning off his country’s crude oil from disputed Rumaila oil field. On August 1, Iraq demanded that Kuwait write off the Iraqi war debts and pay $2.5 billion in compensation for oil produced in Rumaila. As Kuwait refused the demands, Iraqi forces occupied the country the following day. The UN Security Council demanded a withdrawal of Iraqi troops and imposed economic sanctions on Baghdad.

On 29 November 1990, the Security Council passed Resolution 678 which gave Iraq until January 15 to withdraw from Kuwait and empowered states to use "all necessary means" to force Iraq out of Kuwait after the deadline. An anti-Iraqi coalition involving 34 countries, including the United States, United Kingdom, France and Australia, as well as several Arab and Eastern European countries, was established.

The Soviet Union did not join the coalition. Moscow supported all UN-imposed sanctions, advocated using the services of UN agencies, including the Military Staff Committee, to resolve the conflict. Moscow also called for resolving the conflict by political and diplomatic methods.

© Sputnik / Naowaf Ibrahim
Highlights of International Military Operations in Middle East in 1990-2015
The United States and its allies deployed substantial forces near Iraqi borders. They included about 600,000 officers and men, over 4,000 tanks, over 3,700 field cannons and mortars, about 2,000 fixed-wing aircraft and over 100 warships. The United States contributed about 80 percent of manpower and weapons.

Iraq had an edge in manpower, tanks and artillery systems (over 700,000 officers and men, about 5,000 tanks, over 8,000 field cannons and mortars). At the same time, Iraq had only about 700 warplanes and some 10 warships. The Iraqi air force was outnumbered 13 to one in terms of up-to-date weaponry. Coalition forces had 16 times more advanced helicopter gunships and 4.3 times more modern tanks.

Iraqi air defenses were seriously damaged in the first hours of the hostilities and virtually disabled. On January 30-31, 1991, Iraqi fighting patrols tried unsuccessfully to penetrate Saudi Arabia. Iraqi generals launched up to 60 missile strikes against Israel and Saudi Arabia. However, the strikes proved ineffective due to successful missile-defense operations by coalition forces.

Coalition forces launched ground operations on February 24. That same day, about two battalions of the US Army’s 82nd Airborne Division landed in the southern suburb of Kuwait City, the Kuwaiti capital, and spearheaded the offensive. At the same time, tactical amphibious landings were conducted on coastal islands and some sections of the eastern Kuwaiti coast. By the end of the day, coalition forces had advanced about 30 miles.

On February 25, they breached defensive positions of the 3rd and 7th Iraqi corps in Kuwait. A brigade of the 101st Airborne/ Air Assault Division was inserted by helicopters to expedite the offensive in the Basra sector. The following day, coalition forces retook Kuwait City, and helicopters inserted two paratrooper battalions that straddled the Basra-Baghdad motorway in Iraq.

Hostilities ceased on February 28, 1991, and a ceasefire agreement was signed on March 6.

During the Gulf War, the anti-Iraqi coalition accomplished its strategic objectives, expelled Iraqi forces from Kuwait and reinstated the country’s sovereignty. However, the regime of Hussein and the Iraqi military potential remained largely intact.

According to various estimates, up to 60,000 Iraqi troops were killed and wounded in action or taken prisoner. Iraqi forces also lost an estimated 3,800 tanks, over 1,400 armored personnel carriers and infantry fighting vehicles, about 2,900 artillery systems and about 360 fixed-wing aircraft. The US-led coalition lost about 300 killed and over 600 wounded in action. Up to 50 soldiers were reported missing in action. In all, 69 warplanes and 28 helicopter gunships and transport helicopters were destroyed.

Civilian casualties are still debated. Some sources estimate them at 100,000 to 200,000, and official Iraqi Government statistics list just over 2,300 people killed during air strikes.

About 85 percent of industrial companies were destroyed and damaged in Iraq. Oil industry companies suffered grievously as a result of hostilities. In 1990, Iraq had 820 operational oil wells, and only 58 remained intact after the war.

However, losses incurred as a result of sanctions imposed on Iraq upon the initiative of the United States considerably exceeded those caused by hostilities. Reduced oil exports alone deprived Baghdad of over $200 billion during the 13-year economic blockade. According to some estimates, the local population received just about 10 percent of the required staple foods and medications.

Petropolitics 101: Why Waging Oil Wars is a Bad Idea