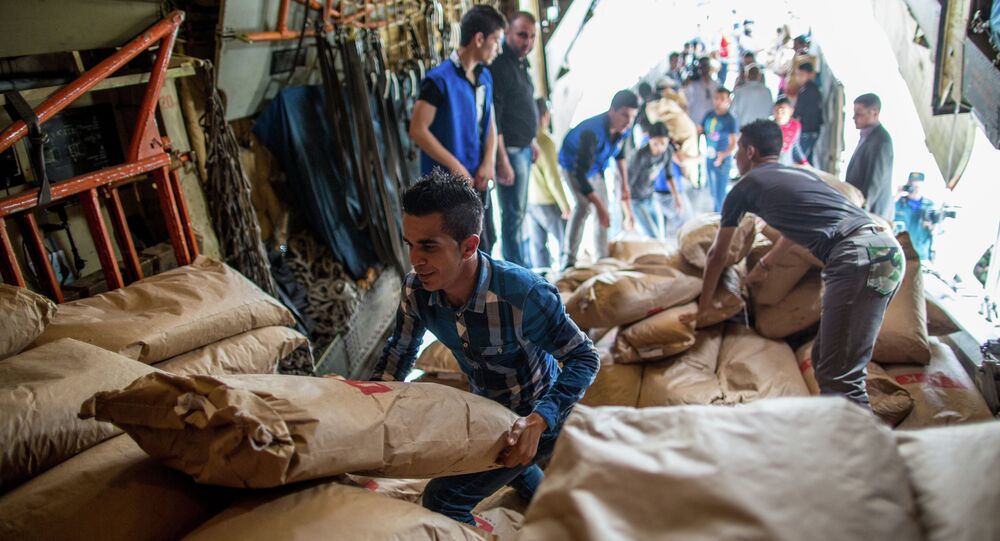 Russia will continue to provide humanitarian aid to civilians in conflict-torn Syria, particularly those in cities besieged by terrorists, Russian Deputy Permanent Representative to the United Nations Vladimir Safronkov told the UN Security Council on Friday.

"Now, the humanitarian operations have also been launched by the Russian armed forces active in Syria upon the request of its government. Aid has been sent to the city of Deir ez-Zor which is currently besieged by terrorists. Today we didn’t hear a word about this in our meeting. With the use of Russian paratroop pilots, 22 tons of cargo have already been delivered. Work in this track will of course continue."

According to UN Deputy Emergency Relief Coordinator Kyung-wha Kang, around 400,000 people in Syria are trapped in areas besieged by the various parties to the conflict, including the Daesh (Islamic State) terrorist group.

Moscow Urges All Parties to Syrian War to Provide Besieged Areas With Aid
Syria has been in a state of civil war since 2011, with the army loyal to President Bashar Assad fighting several opposition factions and militant groups, including al-Nusra Front (Jabhat al-Nusra) and Daesh, which is banned in a range of countries including Russia.

In December 2015, the United Nations, in partnership with the Syrian Arab Red Crescent (SARC), and the International Committee of the Red Cross (ICRC) evacuated more than 450 civilians from areas besieged by militants in Syria under a ceasefire deal reached with the government.

According to the United Nations, over 80 humanitarian workers have been killed in Syria since the start of the conflict and many others remain missing.