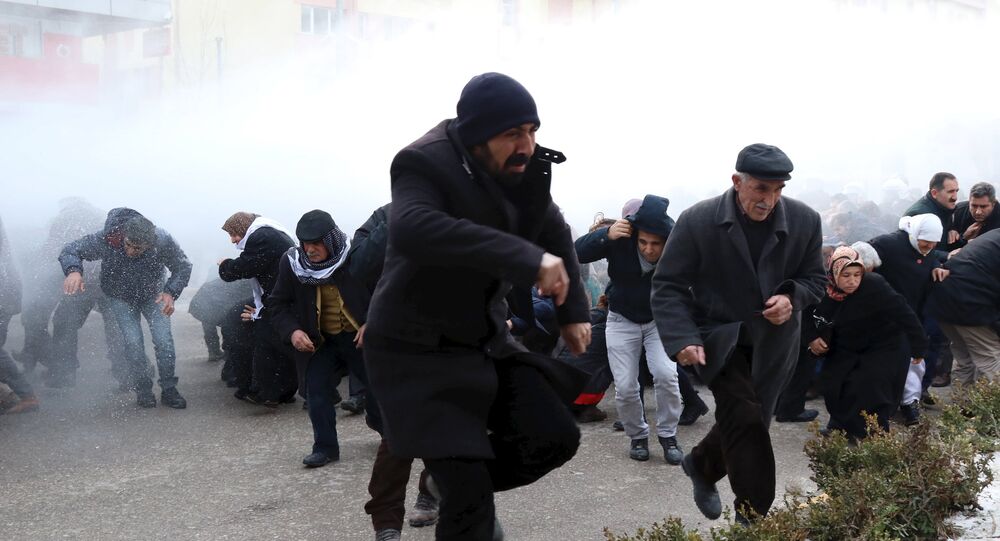 On Friday, Turkish authorities apprehended 18 academics who oppose the government’s treatment of the country’s Kurdish minority, a move that has sparked outcry from a number of high-profile intellectuals and human rights groups.

"We demand the state to abandon its deliberate massacre and deportation of Kurdish and other peoples in the region" reads a petition letter posted online and signed by over 1,400 Turkish academics.

Rather than address the concerns presented, the government of President Recep Tayyip Erdogan has begun arresting those involved with the creation of the letter, accusing them of spreading "terrorist propaganda."

Human rights groups were quick to criticize the arrests.

"President Erdogan’s actions demonstrate that the criticisms being made by academics are accurate," Kevin Zeese, a political activist with PopularResistance.org, told Sputnik. "He wants to suppress the truth and is abusing his power trying to quash legitimate political discourse."

"Accusing academics of terrorist propaganda for criticizing Erdogan’s attacks on the Kurds in a statement signed by 1,000 academics shows insecurity."

This is the latest in a familiar pattern of aggressive actions taken by the Erdogan administration.

"Erdogan is becoming a more difficult ally for any country to stand with as Turkey is developing a record of abuse of their own people as well as those in surrounding nations," Zeese says, pointing to Ankara’s actions in neighboring Syria.

Last year, Turkey shot down a Russian bomber flying in Syrian airspace. The incident was harshly criticized by world leaders.

"The reason he reacted so strongly to the statement of 1,000 academics is because what they are saying is true and the truth is not something Erdogan wants repeated," Zeese says.

"Erdogan may learn that he strengthens the opposition against his rule when he is abusive of people who are merely participating in political discourse."

The Turkish government has also drawn the ire of prominent intellectual Noam Chomsky, who previously turned down an offer from Erdogan to visit Turkey and personally witness Ankara’s operations in areas populated by Kurds.

Ankara has cracked down on Kurdish militants since last July, when a suicide blast occurred near the Syrian border, killing 33. As a key ally in the region, the US has turned a blind eye to Turkey’s actions.

"The PKK {Kurdistan Workers’ Party] is on the US terrorist list, and Turkey is a valued ally, so, unfortunately, the US government is unlikely to lift a finger without large-scale public pressure," Chomsky told Sputnik.