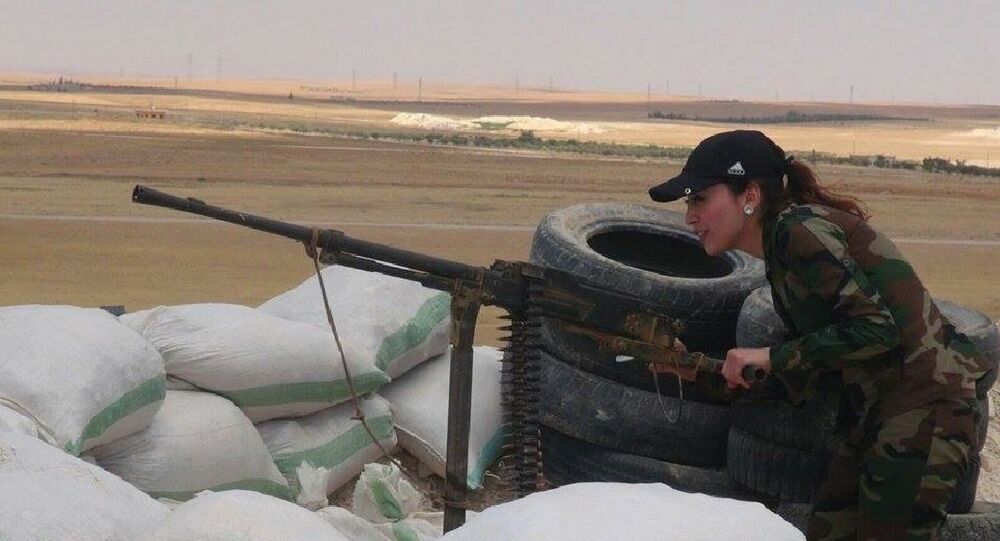 Sisters-in-Arms: Syrian Women Fight Daesh to 'Take Back Their Homeland'

Ordinary citizens of Syria are combatting Daesh terrorists who have been waging war in the country for the last five years. The citizens have taken up arms to defend their country and drive terrorists away. Syrian women are actively joining battalions and fighting side by side with men.

A Sputnik correspondent met with these women and spoke to them in an exclusive interview, taking a peak into their lives and hearing why they have taken up the fight against the terrorists.

Silviya Kuri, a 40 year old entrepreneur, left her job to join the battalion of the national militia fighting in the province of Hasaka against Daesh.

Talking about what pushed her to join, Silviya said, “Great love for my people pushed me to leave my small children at my parents so that I can stand on par with the men of my province and defend our homeland.”

© AFP 2020 / JOSEPH EID
Female Protection Forces: Syrian Women Unite to Save Christian Towns From Daesh
Terrorists in Syria have been waging war for over 5 years and have demonstrated no mercy for children, women or the elderly. “The terrorists are concerned with two things only- who to rape and kill and what to destroy and steal? Hence, I decided to learn how to handle weapons,” Silviya explained.

“I pray to God for the return of peace to our country. I really miss my children and I feel physical pain because of it. My dream is that my children can grow up in a country where there is peace, love, friendship and where there is no place for terrorism,” she said.

Sakhar Bahnia, 26 years old, told Sputnik, that her husband was killed by terrorists because he occupied a public office in the City Hall. After that, she made up her mind to join the women's battalion of the defense force.

“Homeland is priceless. When a person loses something, or someone, one can make up for this loss. But the loss of one's entire country cannot be made up,” Sakhar said.

Another female fighter is Rania Butrus who is just 19 years of age. She had to experience some difficulties before becoming part of the people's militia forces of the country. Her husband was initially against letting his young wife head off to fight against Daesh, but after much persuasion from Rania, he agreed.

“Yes, it's hard. But love for the motherland helps forget all the difficulties and heaviness of the weapons. Despite the constant smell of blood and death threats, we do not stop smiling,” Rania told Sputnik.

30-year-old Shiru, who is fighting as part of the Kurdish self-defense group talked about the training of the battalion and the early morning exercises.

“Before letting them join the ranks of self-defense, we carefully subject candidates to training, military exercises and even theoretical teaching which takes place every day in the morning. Our goal is physical training and practicing control of light and heavy weapons.  Our women troops are not only fighting in Ayn al-Arab (Kobani) but on all fronts, located on the Syrian-Turkish border,” Shiru concluded.