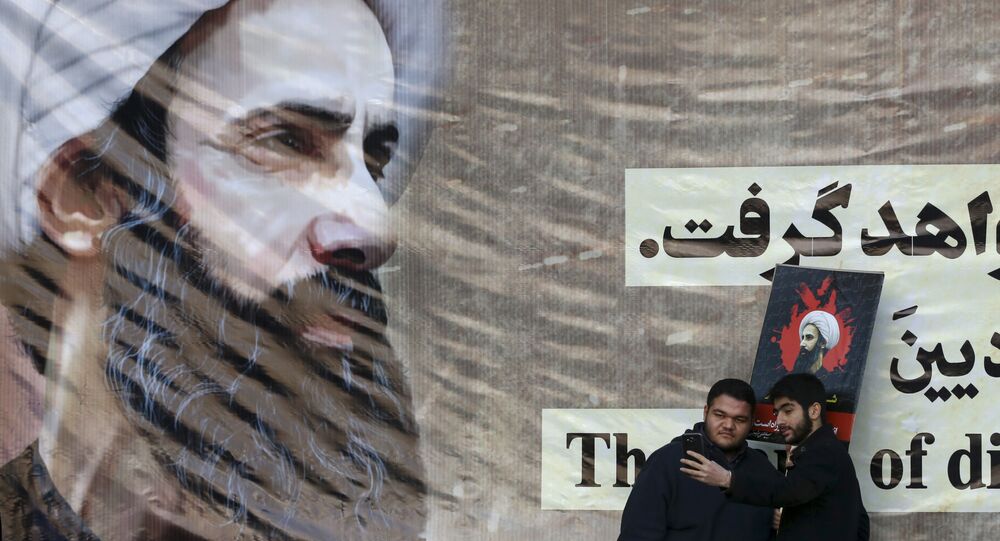 Pondering Riyadh's decision to execute prominent Shia cleric Nimr al-Nimr, which resulted in a political and diplomatic firestorm threatening to burn out of control, Syrian journalist Abbas Juma wonders whether the Saudis could have been duped into such a reckless move, whose consequences could include the collapse of the kingdom.

On January 2, Saudi Arabia executed prominent Shiite cleric and political activist Nimr al-Nimr, sparking outrage among Shiites around the world, including in Iran, where Shia Islam predominates. The execution resulted in protesters in Tehran storming the Saudi Embassy, Riyadh and its allies breaking off diplomatic relations with Iran, and Saudi warplanes bombing the Iranian Embassy in Yemen.

© AFP 2020 / KHALED DESOUKI
'War of the Embassies': Saudi Arabia Escalates Iran Feud
Commenting on Riyadh's possible rationale in an op-ed for independent Russian newspaper Svobodnaya Pressa, Syrian journalist Abbas Juma suggested that, first things first, analysts from all sides knew that Nimr's death would result in a crisis. "Therefore, few could believe that Riyadh would take such a step."

"However, what's done is done. Saudi Arabia has been hit with an avalanche of criticism – and not just from Shiite authorities like [Iranian Supreme leader] Ali Khamenei, [Hezbollah leader] Hassan Nasrallah and [influential Iraqi Shiite Ayatollah] Ali al-Sistani. Some Sunnis too have said that Nimr's killing was a mistake. This includes Syrian Grand Mufti Ahmad Badreddin Hassoun, who said that Nimr was a true Muslim, whose weapon was the truth, and that for this he was executed by Saudi authorities whose regime is based on lies, backstabbing and depravity."

Nimr's death, Juma suggests, is not even "about the conflict between the Shiites and the Sunnis (it's worth nothing that several of those killed in the mass execution alongside Nimr were Sunnis). It's about Riyadh's attitude toward people who openly speak about the oppression of religious minorities in Saudi Arabia, and about their sponsorship of terrorism around the world. If someone from the opposition cannot be bought, he must be killed –that is the logic of Saudi authorities."

"The reaction to the murder of the Shiite theologian did not take long in coming. King Salman, expecting mass unrest in the country's Eastern Province, dispatched additional special forces to the area. It is terrible to imagine what they would have done to Shiite teenagers had they expressed their anger just a bit more strongly."

© AFP 2020 / ADEM ALTAN
Iran Unwilling to Break Diplomatic Relations With Riyadh - Foreign Ministry
"As for what happened on the political and diplomatic level regionally," the analyst noted, "it clearly demonstrates the financial capabilities of Saudi Arabia and the dependence on Saudi money of some, seemingly secure and independent countries. Following the Saudis' lead, Bahrain, Sudan, Kuwait and Qatar began withdrawing their ambassadors from Tehran. The UAE and Oman, as always, were more restrained, but also ended up supporting Riyadh."

"Thus," Juma suggests, "the masks have been removed. The conflict between Shiites and Sunnis is now out in the open. Whoever wanted a new scandal got what they wanted."

"And still, it's not entirely clear why it was necessary to kill the elderly cleric. Of course, it's possible that the theologian's execution was intended to provoke Tehran into committing rash acts against Riyadh in response. It was the same logic which guided the al-Qaeda terrorists who attacked the United States on September 11, 2001. The terrorist attack was meant to provoke Washington into a bloody response, serving as a pretext to call all Muslims to jihad."

© AFP 2020 / YURI GRIPAS
With Friends Like Saudi Arabia, US Doesn't Need 'Enemies' Like Iran
But with Iran vowing to punish the embassy attackers, and refusing to give in to Saudi taunts on other fronts, it seems that the plan to provoke Tehran has failed.

"It is an open question," Juma suggests, "on who created this plan in the first place. We can only judge by the results, and they are not in favor of the Kingdom of Saudi Arabia."

"It's obvious that Nimr did not represent a real threat to Riyadh, neither while he was free, nor, more so, in prison. Now, after his death, the Shiite theologian has on the contrary become a symbol of the struggle against the Saudi regime."

In the wider sense, Juma laments, Nimr's execution will only serve to broaden the Shia-Sunni conflict. "Thus, all hopes for the unification of the Muslim world have collapsed. Chaos, disunity, strife and endless war –this is what awaits Muslims in the Middle East in the foreseeable future."

"Who benefits? Not Saudi Arabia, I don't think. The risk is too strong for them of a Shiite intifada breaking out in the country (especially taking account of the situation with the Houthis in neighboring Yemen). If this happens, the House of Saud won't know what hit it. Unfortunately (and for some, fortunately), not all the fans of the 'game of thrones' taking place in Riyadh understand this. And those who do, don't always act in Riyadh's interest," Juma concludes.