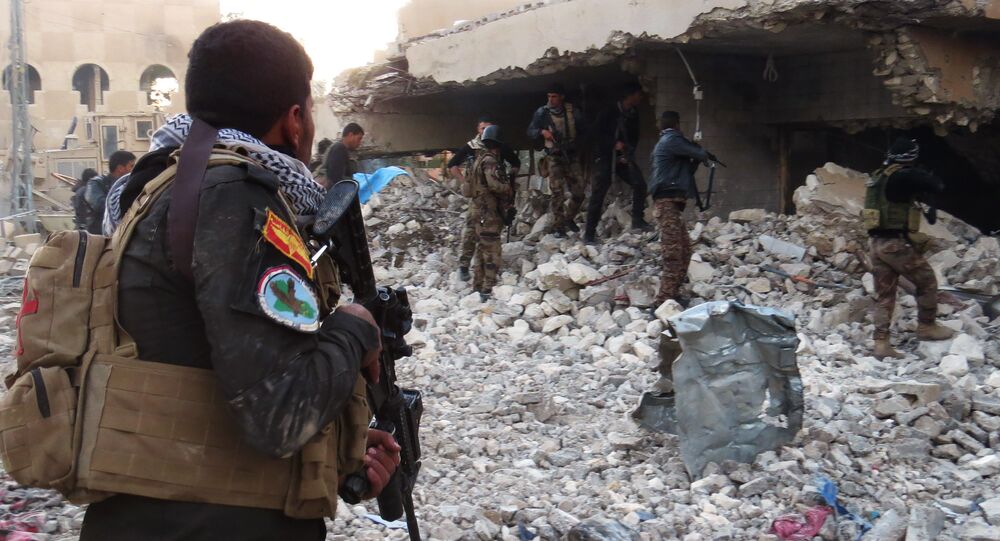 Sheikh Akram Al-Kaabi, the leader of Hezbollah al-Nujaba, a major Iraqi Shiite resistance movement fighting Daesh (ISIL/ISIS) in the region, has revealed that the jihadist group receives lavish amounts of money from Saudi Arabia and Qatar and modern weaponry from 120 countries around the world, according to the Iranian news agency FARS.

"Saudi Arabia and Qatar are extensively supporting the Takfiri (Daesh and radical Islamist) terrorists financially but surely victory belongs to the resistance groups," the agency quoted Sheikh Akram al-Kaabi as saying at a meeting with Iranian Shiite cleric Ayatollah Alavi Gorgani in the Iranian city of Qom (also known as Ghom) on Saturday night.

"In the Syria war, 120 countries throughout the world are supplying the terrorists with state-of-the-art equipment and weapons," added the Iraqi leader.

© AFP 2021 / FAYEZ NURELDINE
Daesh Godfathers? Turkey, Saudi Arabia, Qatar Spotted Funding Terrorists
He voiced concern about the dire humanitarian situation in the besieged towns of Kafria and Foua'a regions in Idlib province, and said sending aid to these two towns is difficult due to the presence of terrorist groups.

Kaabi said that the Takfiri terrorists are still attacking the two Shiite-populated towns and despite the resistance forces' operations to break the siege of the two towns, they are still under the militants' control.

Similar concerns have been earlier voiced by Leader of the Lebanese Orthodox Party Masarik Roderick Khoury, who named Turkey as the main sponsor of terrorist groups in Syria.

"Turkey is the first and main power which funds and supplies weapons to terrorist groups. We believe the fight against terrorism should begin with pressuring Turkey. Now Turkey is the main sponsor of terrorism in the region," Khoury said at a press conference in Moscow in December.

© AP Photo / Vadim Ghirda
'Turkey Main Sponsor of Terrorists in Syria' – Lebanese Politician
“The name of the real leader of the terrorists is Tayyip Erdogan [Turkish President]. The others like Abu Bakr al-Baghdadi [Daesh/ISIL leader] and al-Qaeda are just his servants. Al-Nusra Front also carries out orders from Turkey," he then pointed out.

The Lebanese politician said there was real exidence to the allegations: after the city of Kassab, near Latakia, was liberated from terrorists Turkish ambulance vehicles, clothes and weapons were found there.

Khoury also added that when the terrorists take Syrian or Lebanese hostages they only can be released after negotiations with Turkey.