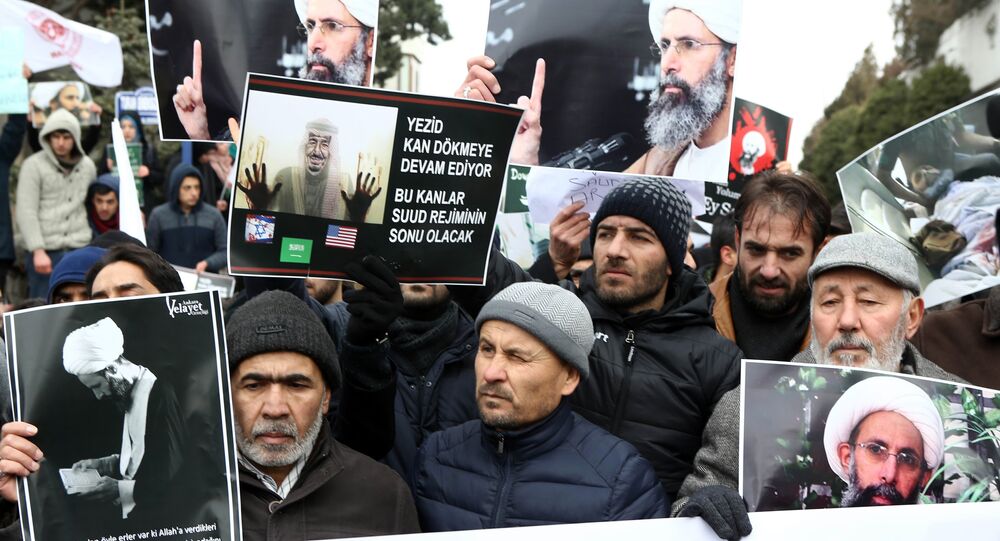 ‘Saudi Executions Well in the Spirit of Daesh, Miss Only Video’

The mass execution Saudi Arabia has recently conducted is worthy of Daesh and perfectly in tune with its Wahabi teachings; all that remained missing was the video of the decapitations, according to Middle East correspondent Robert Fisk.

Perhaps that was exactly the point, the correspondent suggests.

© REUTERS / Raheb Homavandi/TIMA
Whether at Home or Abroad, Saudi Arabia Can't 'Kill Its Way Out of Adversity'
“For this extraordinary bloodbath in the land of the Sunni Muslim al-Saud monarchy – clearly intended to infuriate the Iranians and the entire Shia world – re-sectarianised a religious conflict which ISIS (Daesh) has itself done so much to promote,” Fisk wrote in his article for The Independent.

One of 47 people executed, prominent Shia cleric Nimr al-Nimr, he suggests, would have got precisely the same treatment from the thugs of Daesh as he got from the Saudis – albeit without the mockery of the pseudo-legal trial which Sheikh Nimr was afforded and of which Amnesty complained.

The author also notes that all of the kingdom’s 158 executions last year were “perfectly in tune with the Wahabi teachings of Daesh,” also known as the Islamic State/ISIL/ISIS.

“Macbeth’s ‘blood will have blood’ certainly applies to the Saudis, whose ‘war on terror’, it seems, now justifies any amount of blood, both Sunni and Shia.”

The authorities’ whimsical suggestion that there was nothing sectarian about this most recent bloodbath – on the grounds that they beheaded Sunnis as well as Shias – was classic Daesh rhetoric.

Cleric Nimr al-Nimr, “was not just any old divine,” Fisk says. He spent years as a scholar in Tehran and Syria, was a revered Shia leader of Friday prayers in the Saudi Eastern Province, and a man who stayed clear of political parties but demanded free elections, and was regularly detained and tortured – by his own account – for opposing the Sunni Wahabi Saudi government.

© AFP 2021 / STR
Iran Diplomat: Saudi Arabia Cannot Bury Cleric's Execution by Cutting Ties
The correspondent’s point of view is that the killings represent far more than just Saudi hatred for the cleric. It will reinvigorate the Houthi rebellion in Yemen, which the Saudis invaded and bombed this year in an attempt to destroy Shia power there. It has enraged the Shia majority in Sunni-ruled Bahrain. Additionally, Iran’s own clerics have already claimed that the beheading will cause the overthrow of the Saudi royal family.

These suggestions have already been supported by the apparent tensions in the region, including the cutting of diplomatic relations by Saudi Arabia and Bahrain with Iran.

“It will also present the West with that most embarrassing of Middle Eastern problems: the continuing need to cringe and grovel to the rich and autocratic monarchs of the Gulf while gently expressing their unease at the grotesque butchery which the Saudi courts have just dished out to the Kingdom’s enemies.”

These words have also been supported by a very cautious reaction from the US and EU, with the notable exception of UK Prime Minister David Cameron.

© REUTERS / Neil Hall
Shia Cleric Execution Sparks Anger in Region, Cautious Criticism of US, EU
“Had ISIS chopped off the heads of Sunnis and Shias in Raqqa – especially that of a troublesome Shia priest like Sheikh Nimr – we can be sure that Dave Cameron would have been tweeting his disgust at so loathsome an act. But the man who lowered the British flag on the death of the last king of this preposterous Wahabi state will be using weasel words to address this bit of head-chopping,” the correspondent therefore says.

And with all the above in mind, the author therefore suggests:

“The question will be asked in both Washington and European capitals:  are the Saudis trying to destroy the Iranian nuclear agreement by forcing their Western allies to support even these latest outrages?”

“In the obtuse world in which they live – in which the youthful defense minister who invaded Yemen intensely dislikes the interior minister – the Saudis are still glorying in the ‘anti-terror’ coalition of 34 largely Sunni nations which supposedly form a legion of Muslims opposed to ‘terror’.”