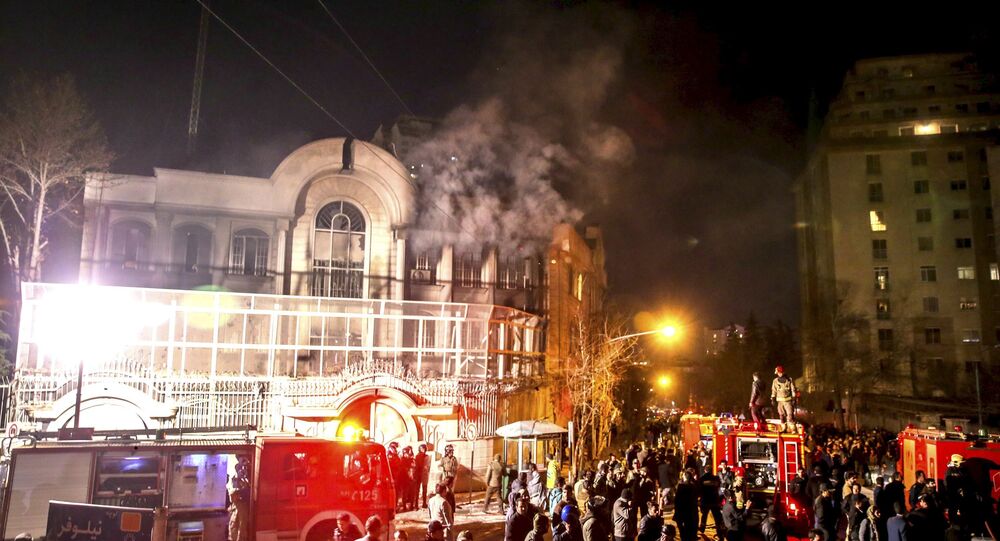 The conflict between Iran and Saudi Arabia over Riyadh's execution of a prominent Shia cleric is escalating, threatening to turn the region's ongoing conflicts into wars of religion, warns Russian Middle East expert Vladimir Ahmedov.

© REUTERS / Neil Hall
Shia Cleric Execution Sparks Anger in Region, Cautious Criticism of US, EU
Considered a terrorist by Saudi authorities for his criticism of the government, calls for free elections and demands that authorities respect Saudi Shias' rights, al-Nimr's execution sparked outrage and an escalation of diplomatic tensions across the Middle East, but only a cautious criticism from Riyadh's allies in Washington and Brussels.

The cleric was killed along with 46 others in the country's largest mass execution in decades, sparking anger and violent protests in Shia areas of Saudi Arabia, as well as Bahrain, Indian-controlled Kashmir, Pakistan, and Iran, where protesters stormed the Saudi Embassy in the Iranian capital and attempted to set the building on fire.

Trying to prevent the explosive situation from escalating out of control, Iranian President Hassan Rouhani vowed to bring to justice those responsible for Saturday's attack. "The Iranian people should not allow [al-Nimr's death] to become an excuse for rogue individuals and groups to commit illegal acts and damage Iran's image," Rouhani said.

Speaking to his EU counterpart on Sunday, Iranian Foreign Minister Javad Zarif said that Iranian authorities had taken steps "to defuse the tensions and protect the Saudi diplomats."

Nevertheless, Saturday's execution has only resulted in the further deterioration of relations which were already less than cordial. In several of the region's ongoing conflicts, Tehran and Riyadh are on opposite sides of the barricades.

© AFP 2019 / SAMUEL KUBANI
Vienna Calls for Tehran-Riyadh Dialogue Amid Tensions Over Saudi Executions
In Syria, Iran has offered the secular government of Bashar al-Assad, embattled by over five years of war, political, economic and military assistance against a coalition of Saudi, Turkish and Qatari-funded jihadist groups, including the Muslim Brotherhood, the al-Nusra Front and Daesh (ISIL/ISIS).

Furthermore, in Yemen, Saudi Arabia has formed a military coalition to try to crush the Shia tribesmen known as the Houthis, who overthrew the government of Saudi-backed president Abd Rabbuh Mansur Hadi last year. Accusing the coreligionists of being a proxy for Iran (claims which both the Houthis and Tehran have denied), Riyadh launched a military campaign, including a naval blockade, prompting criticism that the intervention has caused a 'humanitarian catastrophe'.

At the same time that it has struggled with real and imaginary Iranian threats abroad, the Saudi dynasty has also grown fearful of Shiites living in Saudi Arabia itself.

Commenting on the escalating conflict for Russia's Gazeta.ru, Vladimir Ahmedov, a senior researcher at the Institute of Asian Studies of the Russian Academy of Sciences, called the emerging situation "somewhat frightening." According to the academic, the conflict in the Middle East threatens to gain a new, religious dimension, openly becoming a war between Sunnis and Shiites.

"Living in the 21st century, we have been thrown back into the Middle Ages, when the main factor of wars was religion," rather than geopolitical considerations and the capture of territory. "This," Ahmedov warned, "reduces the possibility of coming to an agreement in the most acute conflicts in the region."

© Sputnik / Vladimir Fedorenko
Riyadh Intends to Create Coalition Against Shiites - Russian Lawmaker
"In Yemen, Saudi Arabia has announced that it has decided to resume hostilities. It will be just as difficult to come to an agreement on Syria, where that Saudis will begin coordinating with Turkey, in my view."

As far as Russia is concerned, the analyst warned that the cleric's killing portends positive negative consequences, with the regional sectarian conflict threatening to to Russia's borders, "to the neighboring states of Russia's underbelly in Central Asia." Ultimately, the analyst suggests, "I have no optimistic forecasts on this situation being resolved in the near future. Still, we can only place our hopes in the true authorities of the Muslim world."