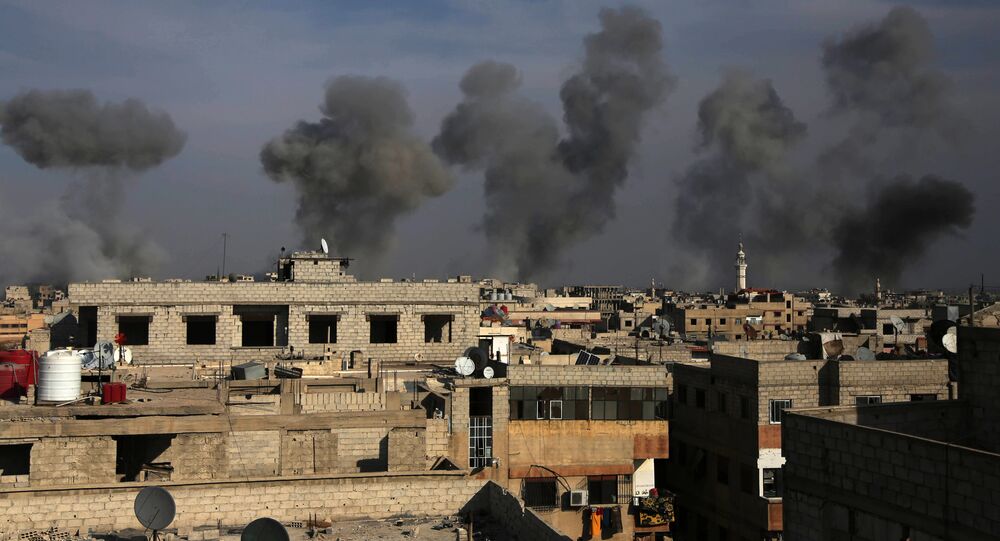 Turkish forces directly assisted terrorist groups fighting in Syria, Bashar Jaafari, Syria's envoy to the UN, wrote in a letter to the UN Secretary General and the Security Council.

Jaafari noted that armed groups have been waging an "unprecedented terrorist war" against Syria since 2011, adding that rebels receive backing from regional powers, including "the Erdogan regime," and other countries.

Turkey's engagement in Syria's domestic affairs, according to Jaafari, has been multifaceted, "including the direct participation of the Erdogan regime's armed forces in offensive military operations in support of terrorists."

Bashar Jaafari also noted that the Turkish president wants to "revive the Ottoman colonial legacy" as evidenced by Erdogan's explicit desire to protect ethnic Turks, even if they live in other countries.

© REUTERS / Lefteris Pitarakis
FILE - In this Sunday, June 14, 2015 file photo, Syrian refugees are helped into Turkey after breaking the border fence and crossing from Syria in Akcakale, Sanliurfa province, southeastern Turkey
© Photo : Russian Ministry of Defense
Russian Air Campaign Leaving No Chance for Washington, Ankara to 'Split Syria Up'
The Syrian envoy accused Ankara of committing crimes against Syrian refugees, who fled Daesh, al-Nusra Front and other terrorist organizations fighting in the Arab country. Human trafficking, according to Jaafari, is conducted "with knowledge and direct participation" of organizations controlled by the Erdogan regime.

Jaafari has called on the international community to put an end to "violations and crimes" committed by the Turkish leadership with regard to Syria and Syrian refugees.

The Syrian envoy to the UN also mentioned the Russian bomber, which was shot out of Syrian skies by a Turkish fighter jet while on a counterterrorism mission. "No additional explanations are needed since this crime speaks for itself," he noted.