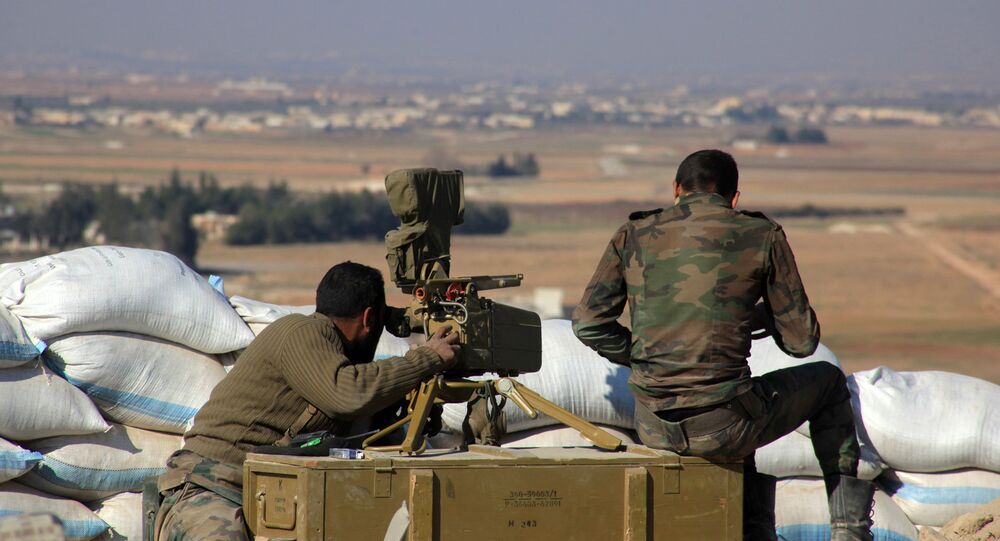 In recent days, the SAA was engaged in fierce battles with militants in the border region. The SAA has freed the village of Doudyan and its surrounding area. In addition, government forces destroyed militant outposts and supply routes in the villages of Tal Jebin, Tal Meseybeen, Shwehene, Maaret Artiq and Shimaeya in northern Aleppo.

© AFP 2020 / GEORGE OURFALIAN
Smoke rises from buildings in the area of Tal Sharba following government air strikes on the outskirts of the northern Syrian city of Aleppo on December 27, 2015, as government forces seized the area from Islamic State (IS) group jihadists

The SAA is said to have killed scores of terrorists, although the sources did not provide a specific number. Damascus-led forces also destroyed vehicles outfitted with machine guns.

Politicians, military leaders and experts have long pointed out that Ankara is not doing enough to close its porous border with Syria, which militant groups use to get supplies, weapons and recruits to the war zone. Sealing off the border is largely seen as a major step needed to weaken militants fighting in Syria.

© AFP 2020 / GEORGE OURFALIAN
Syrian pro-government fighters look at smoke rising on the horizon following government air strikes on the Tal Sharba area, on the outskirts of the northern Syrian city of Aleppo, after they seized the area from Islamic State (IS) group jihadists on December 27, 2015
© Sputnik /
Syrian Army Destroys Daesh Oil Convoy Near Palmyra
The SAA also made gains in eastern Aleppo, taking the strategic village of Sharba' under control. Scores of militants are reported to have been killed in the operation. The army also destroyed militant strongholds and military hardware.

Government forces scored a victory over militants in the village of al-Ameriyeh in southern Aleppo. They also freed several farms to the west of the provincial capital.

At Least 30 Killed in Triple Attack in Syria's Homs