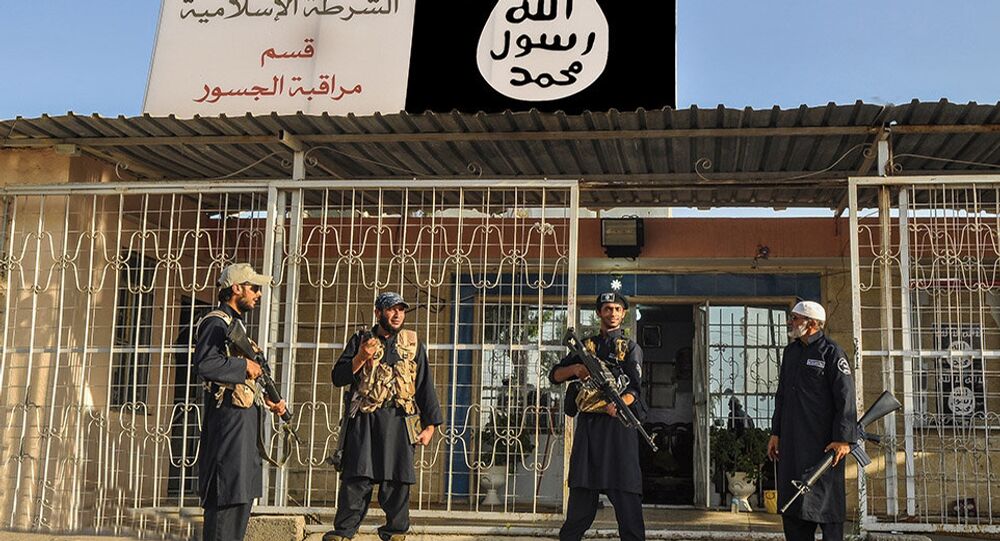 The agreement between the Syrian government and Daesh terrorists for the latter to leave parts of southern Damascus was enabled by Russia's military support, wrote the German press on Saturday.

As a result of more than two months of negotiations between the Syrian government and militant Islamic fighters, including members of the terrorist group Daesh, thousands of militants and their families will be transported out of suburbs in the south of Damascus.

Daesh and al-Nusra seized most of the of the Yarmouk refugee camp in southern Damascus in April, and also took control of the neighboring districts of Hajar al-Aswad and al-Qadam. Terrorist control over the camp had meant that aid workers were unable to deliver necessary supplies to the refugees living there.

The Yarmouk refugee camp was established by the Syrian government in 1957 for Palestinians who had been forced to flee their homes by the 1948-49 Arab-Israeli war. When the Syrian civil war started in 2011, around 150,000 people were living there, and now around 18,000 Palestinian and Syrian civilians are still living there, despite having no access to regular food supplies, clean water or healthcare.

© Sputnik / Dmitriy Vinogradov
Yarmouk refugee camp in Damascus
Around 2,000 of the 4,000 people who will leave the camp and surroundings areas are believed to be Islamists affiliated with either to Daesh or al-Nusra. Under the agreement, they will retreat to the Daesh stronghold of Raqqa, and allow the Syrian government and United Nations to deliver the necessary supplies to the people living at Yarmouk, and for some of them to leave camp for safer areas of Damascus.

The agreement is one of a number of breakthroughs enjoyed by Syrian government forces since Russia's air force began assistance on September 30 in the form of air strikes against Islamic terrorists.

© AFP 2021 / ABD DOUMANY
Syrian Army Confirms Death of Terrorist Leader Zahran Alloush in Airstrike
The Syrian army announced on Friday that one of its air strikes in an eastern Damascus suburb had killed Zahran Alloush, leader of the powerful Jaysh al-Islam terrorist group, and commanders from the terrorist groups Jaysh al-Islam, Failak al-Rahman, and Ahrar ash-Sham.

The Syrian Army reported that the rebel fighters had gathered to negotiate a terrorist coalition with Suqour al-Sham and al-Nusra in the battle against Syrian Army forces when they were hit by the airstrike.

On Friday, the Syrian ambassador to Russia Riyad Haddad told RIA Novosti that Syrian army forces were making good progress in the fight against terrorists, and thanked the Russian Air Force for its assistance.

"I think that now is a kind of turning point in the Syrian army military operations against terrorists – namely, the transition from defense to attack," said Haddad.

"I want to say that the success of our army is in accordance with the effective work of the Russian air force in Syria."

"Today, our army is successfully gaining ground close to Aleppo, and has liberated several villages located close to the main highway linking Aleppo and Damascus. In addition, our army has been able to liberate practically all villages in the province of Homs. At the moment, the army is successfully liberating villages in the province of Latakia," Haddad said.